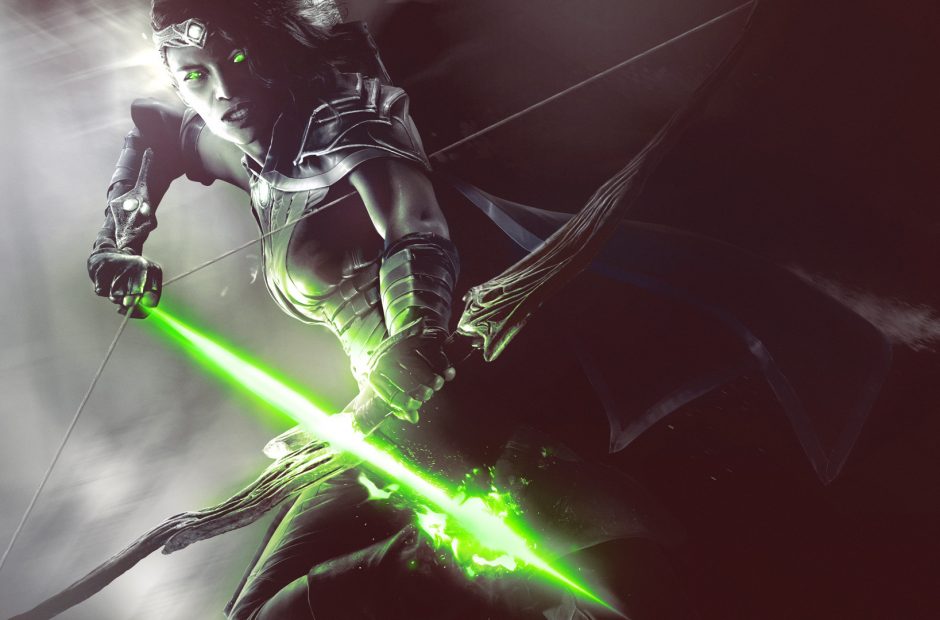 I had sort of fallen off the Magic train there for a few months. The busy “dad obligations” aside, Commander expansions rarely ever blip on my radar and Battlebond, while fun, required too much absence from my house while the family was getting used to the United States. Guilds of Ravnica’s pre-release pulled me by the whiskers a little, but even then, I resisted, knowing that I would never have the opportunity to get out there and play consistently enough to enjoy it.

But then I downloaded the Magic Arena beta test, and once again, I’m hooked.

The polarizing “free-to-play” Magic: The Gathering alternative has had plenty of highs and lows throughout its development. Some fans welcome it with open arms, enjoying its accessibility and the serious graphic overhaul it received from the outdated look of Magic Arena’s predecessor, Magic Online. Naysayers doubt that Magic Arena has what it takes to last for an extended period of time, pointing to how frequently casual free-to-play games whither away and how it cant possibly capture the same breadth of options that Magic Online can since it only includes cards from Standards and few alternative options.

Me? After playing for a week, I’m all aboard with Magic Arena as an acceptable alternative to the real thing. Not that I intend to stop playing the actual card game altogether, but for those Friday Night Magic nights where I can’t make it out, it provides me with a simple way to play my favorite game. 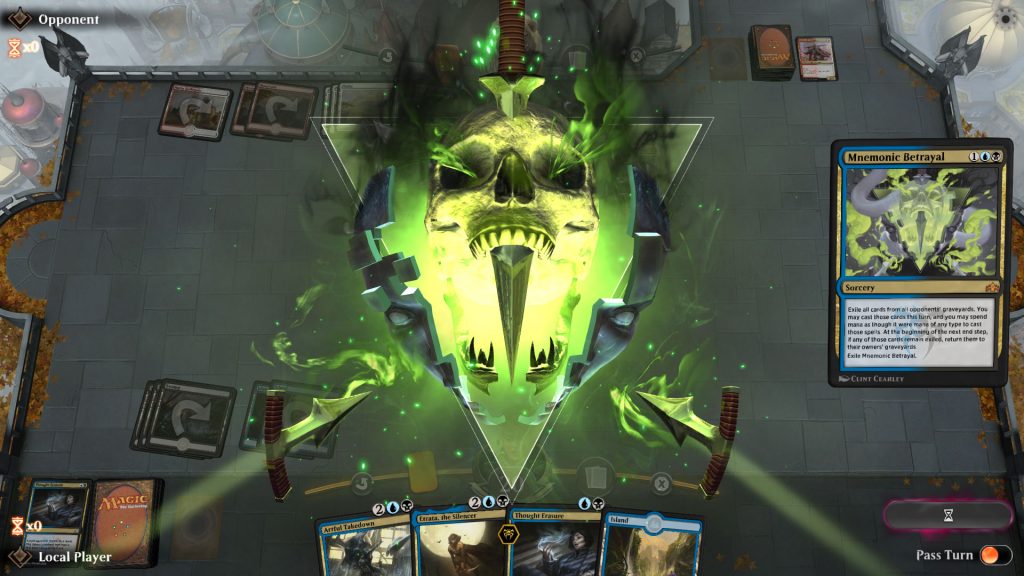 The first job of Magic Arena has always been to make the game more presentable in a digital setting. Games like Hearthstone tear up the online collectible card game scene not just because they provide deep strategies and interactive competition, but also because they are simply more fun to watch on a stream.

Don’t get me wrong, I love the antiquated look of Magic Online. Something about the sound effects and that classic little “claw” animation indicating life loss reminds me of playing late-90s PC games, most memorably Age of Empires.

Every time my creatures get through… Age of Empires comes to mind.

But I’m also a weird soul and unnecessarily sentimental for the simple joys of my youth. Generations of gamers have come and gone since the last time Magic Online overhauled its look, and my gut tells me not many share that same quaint appreciation.

Thus, we have Magic Arena’s first big success. The game is immediately more beautiful than Magic Online, providing an attractive UI with flashing cards, arrows, and plenty of visual cues to show, no mistake, what is happening. There should be little to no confusion about what actions are happening in front of you thanks to how nicely and simply Magic Arena spells out damage distribution with every block, targets with big flashy arrows, and most impressively, slick battle animations for most mythic and important rare cards.

Rarely do I ever misclick Magic Arena in the same way I do with Magic Online.

Early beta videos showed that the developers went a little too far in their animation ambitions, but since then, these have been scaled back. I originally intended for the animations to get in the way of my enjoyment of the game, but thankfully, this is not the case. Magic Arena both manages to make the game attractive for streamers and audiences without allowing that attraction to dilute the actual mechanics for the gamers themselves.

Now, for the in-game economy. As with most free-to-play games, you’ll have plenty of options to both go at your own pace to unlock cards through dedicated play. OR, you can be a whale, sink a whole bunch on money into it, and unlock that ultra Standard deck you’ve been dying to try for the last few weeks.

The latter is something I support for Magic Online, which has always intended to recreate the actual game on computers. Without lots of money, there is no reason to play Magic Online since you get nothing for free!

Magic Arena is different. At the start of the game, you are hit hard with five single color decks, right on the spot. That’s roughly 100 cards to help flesh out your own Standard decks that you can take into quick matches against opponents. And not overly Starter decks either. These original five decks include the likes of Ghalta, Primal Hunter and Sai, Master Thopterist, two superstars of the previous Standard cycle with loads of potential for deck build-arounds.

Sure, not all the cards are the best, but with what you’re given, your imagination should be able to conjure up something decent.

From there, you are given the ability to mix and match these cards to build your own creations. Buying singles is not a thing in Magic Arena, meaning you’ll have to make use of those quality commons and have to fill in the gaps with cards you normally wouldn’t play, giving Magic Arena a much more necessary casual feel than the real game.

I would never run a Sure Strike in a constructed Standard deck, but you can bet I did in Magic Arena.

It’s somewhat refreshing to have to play this way after years of seeking out the most powerful Standard decks and spending more money on singles than I should. Magic Arena excels in putting the focus back on the game rather than the real world economy that drives it. It recreates the feeling of Limited Magic, where every card in the world is not just a TCGPlayer purchase away, while still delivering the satisfying feeling of Constructed Magic, the joy of knowing your creation works.

Sure, every once in a while you’ll meet a person through random match-ups who sunk a lot of money into the game, but by and large, most people seem to be taking this game as it was clearly intended to be, a more laid-back casual way to enjoy the game.

Never fear though, because Magic Arena has plenty of ways to expand your card collection. When you first begin, each day will provide you with an opportunity to unlock a new Starter deck, and all you have to do is play a single game. Not win a single game, just play. Each and every day, that’s about twenty new cards, some useless commons, some useful commons and uncommons, usually a solid rare or mythic in there.

But hey, these are free cards you earned just for playing!

And then there are the quests. All free-to-play games provide short-term goals and incentive to play the game consistently, and with Magic Arena online, you get what every player wants from these quests… more cards! Some quests, be it “Win a Game” or “Cast Forty Green Spells” or “Play Twenty Plains” will grant players gold, which allows players to buy booster packs! 1,000 gold lands you a booster pack, and it’s pretty easy to score a single pack a day.

Caution though! Booster packs in Magic Arena have eight cards, not the usual fourteen. That’s one rare or mythic, two uncommons, and five common cards. But hey… those were free! Stop complaining! I haven’t played any drafts yet, but these do have the standard fourteen cards.

And while there is no option for buying singles in Magic Arena, there is an option for Wild Cards. Some booster packs will contain a wild card for a common, uncommon, rare, or mythic, and these allow you to basically obtain any card you’re looking for!

Uncover a Mythic Wild Card? Awesome, you just found yourself a fresh, new Planeswalker, or an Aurelia, Exemplar of Justice in my case.

The game starts you off with several of these wild cards, including one mythic, so I was able to piece together a solid Boros Mentor deck without playing or even dropping a single cent. How generous!

As stated by the game’s developers, Magic Arena has a very clear path to getting you the cards you want. All you have to do is play consistently, and you’ll get there!

And I still haven’t explored all of the options yet. I will eventually shell out a few dollars to try a real draft event, and I haven’t even tried out a Quick Draft yet. However, absolutely, from what I’ve seen so far, this is the perfect casual substitute for those looking to get their Magic fix without leaving their house or dropping lots of money into the game… and get their fix by being rewarded for play.