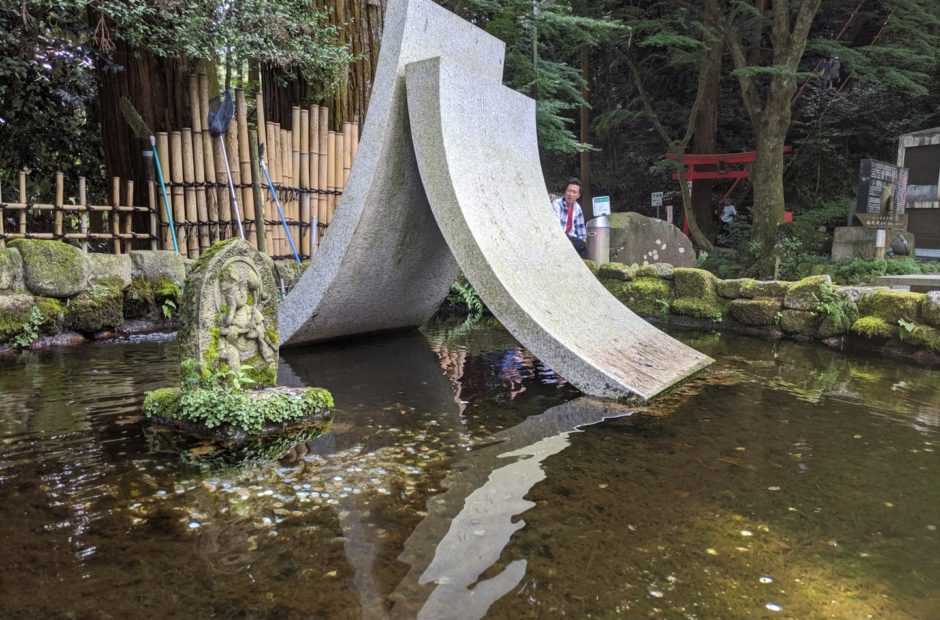 When we left off, I was still in Tokyo. For the last few days of the trip, that all changed. On Saturday morning, we hopped on a bus and rode north for about two and a half hours to Ikaho, a small town in Japan’s Gunma prefecture that sits on the side of Mt. Haruna. Going from Tokyo to Ikaho might be as much of a culture shock as going from Minneapolis to Tokyo. It’s that different.

Anime fans, take a pause here: This is where Initial D was set. Mt. Akina in that show is a stand in for Mt. Haruna, and you can see signs of it here and there. Initial D is an older show by this point, but you can see auto garages that have Initial D styling and the like here and there. This is also one of my few regrets; I wanted badly to take a taxicab up the mountain and see the roads, but time just didn’t allow.

We stayed at Moriaki Ryokan, a traditional Japanese inn and hot spring while we were there.

As soon as you get out of Tokyo, advertisements stop dead. Tokyo is a 24/7 assault of signage and advertisements for anime and cosmetic treatments. Ikaho, meanwhile, has worked hard to stay much as it was decades and decades ago, if not centuries. About the only thing it has in common with Tokyo is the number of stairs you’ll be climbing while you’re there.

It’s still a dense place, but the pace is slow, and even on the holiday we were there, it didn’t feel that crowded. The main street up through Ikaho proper is a massive stairway lined with shops. Up the stairway, you’ll see windows looking down into the ground. If you peer in, you’ll see water that fills the geothermal baths of the many onsen (hot springs) in the area. There are restaurants, of course. One of my favorite spots, though, was a craft beer joint that had dozens of imported beers from all over the world that you could order through an open window right on the street. Oh, right: no open container laws. I didn’t abuse that, don’t worry. But it was nice to walk around with a light beer while seeing the sights.

Before we went up the mountain, though, first we went down with the goal of getting udon noodles at Tamaruya, one of the longer-running noodle restaurants in Japan. With it being a holiday, though, things were busy. We watched no fewer than three Ferraris, two Porsches, and a Lamborghini roll through the neighborhood while we were waiting.

With a 45 minute wait before we could go in, we walked about a block to the Mizusawa Kannon shrine. This might be the single most beautiful place I saw while in Japan. The shrine is located up a long flight of stairs (see a pattern here?) and surrounded on all sides by thick forest. The whole place hummed with life. It was full of people, but not crowded. Stretching from branch to branch were countless spider webs belonging almost exclusively to what looked like Joro spiders. I won’t include a picture, but you can click on the spider’s name to see the wiki page. They’re a few inches across with their legs, and there were just so many of them everywhere. I’m not an outdoor kid by any stretch, but I think I’ll stay out of the woods in Japan, thank you.

Back to that shrine. 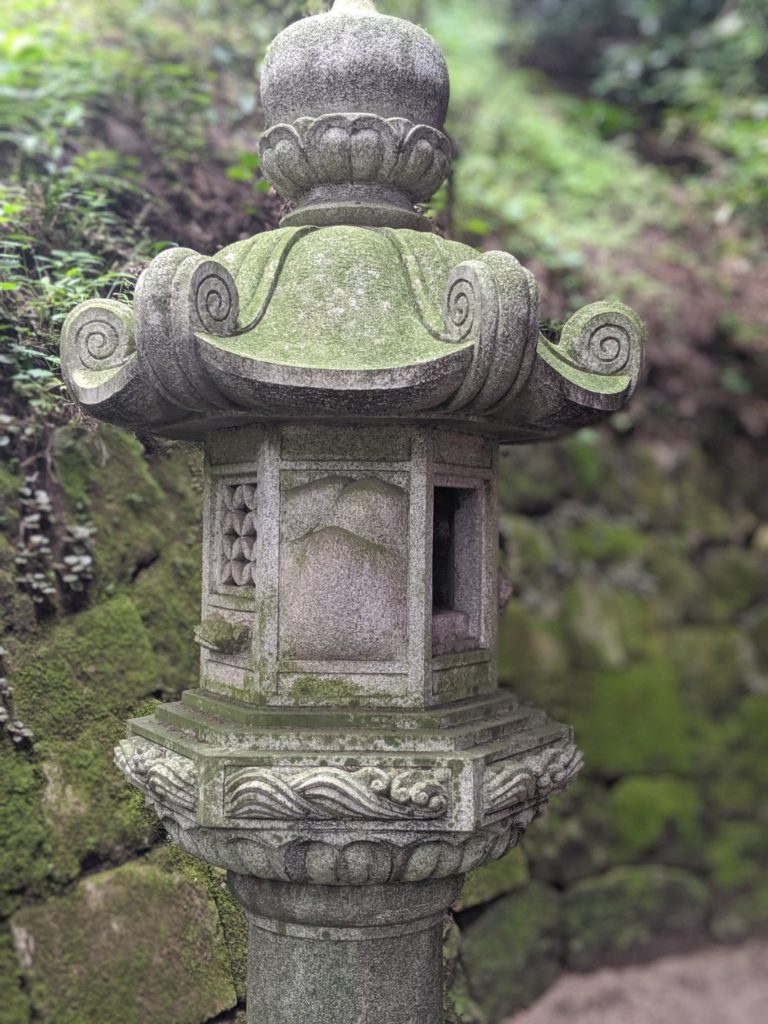 Unlike Sensoji Temple and the shrine at Kamakura, the Mizusawa shrine felt less like a tourist destination and more like a place where people go to follow tradition. It’s well cared for, but also not crawling with groundskeepers. The shrine buildings are bright, vibrant red, making for an incredible contrast against the lush green of the forest. The stone, meanwhile, was covered in moss anywhere that didn’t see heavy foot traffic. There’s a main shrine building and then next to that a shrine with a rotating inner column that you can step into and push in a circle three times as a way of generating good luck. There’s also a remembrance area where you can light incense to offer up for a passed away loved one.

I’m not a terribly spiritual person by nature, but Mizusawa Kannon is about the closest I’ve ever gotten to a spiritual experience.

We eventually strolled back down to the udon joint and had incredible udon, tamagoyaki (basically a scrambled, sweetened egg cake), and mushroom tempura. It was all amazing, and I do not generally like mushrooms. Seriously: try the mushrooms.

Once we were done here, we were all pretty exhausted. We walked up and down the main Ikaho stairway and had beer and stepped in to play a few carnival games. Spoiler: I’m not a skilled archer despite watching all seven seasons of Arrow. What the heck, CW?

The Moriaki Ryokan is about as traditional as you can get in this day and age. That is to say, the place has elevators and western-style bathrooms. But when you stay, your room will be outfitted with futon and yukata for each person. A futon is a traditional Japanese bed. For us Americans, it feels like being a kid, sleeping on the floor on a blanket with just a little padding. Yukata, meanwhile, are Japanese robes. They’re different from kimono, which are formal wear. Yukata are the robes you see characters walking around in during festival episodes of your favorite high-school anime. As a guy who doesn’t really even like wearing shorts, wearing a yukata was definitely weird.

While at the ryokan, I went to the onsen three separate times. One of the best parts about Moriaki is the outdoor onsen. Hotsprings that are open to the sky.

Now, these are a bit weird for westerners. The onsen are of course split by gender, but in there, most of the people generally do not have any shame about their bodies. Before you get into the bath, you’re expected to wash your whole body, head to toe, at these showers that have short stools in front of them. You’re meant to soap up and rinse down, hair included. You can even brush your teeth at these stations if you like using an included toothbrush and toothpaste. 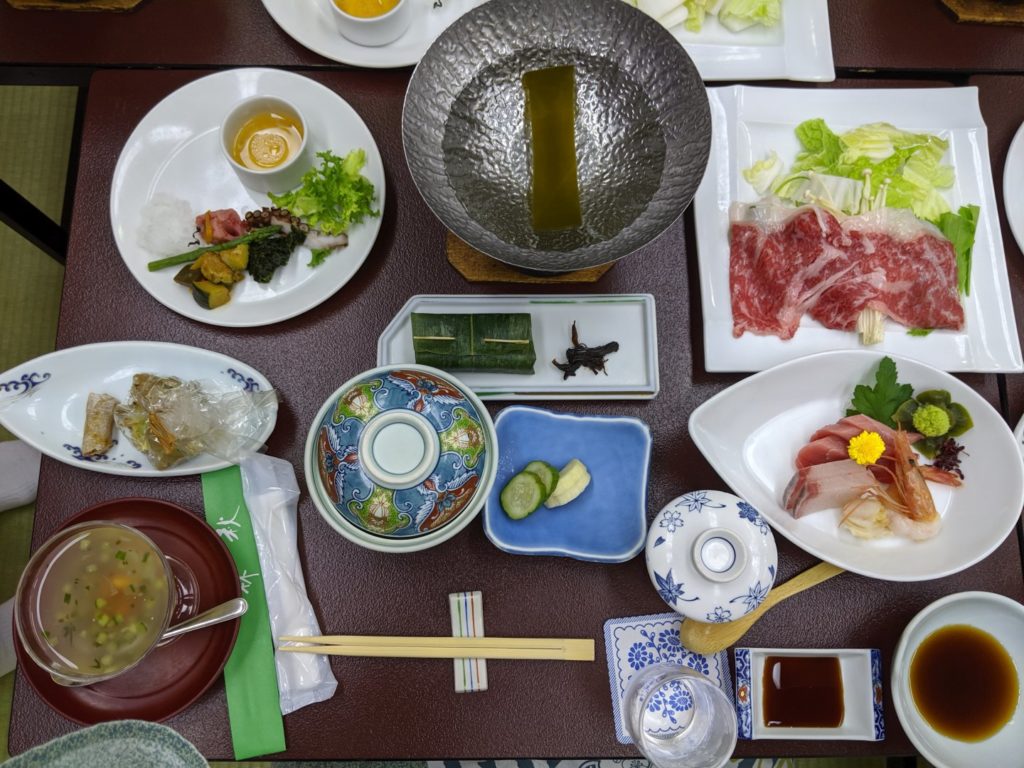 Once you’re clean, you can head to the pool. These days, it’s formed of concrete with rocks for atmosphere. The pools are thigh-deep – enough that you can sit down flat and not be underwater. What with the whole ‘being naked in front of strangers’ thing, I wasn’t sure if I’d be able to get into it, but once I was in the onsen it was all over. If you have the opportunity to go to an onsen, do it. If you’re inked up all, though, you may want to read up on how your onsen handles tattoos. You can also bring a bandage and put that on ahead of time to cover up your tattoo if you prefer. Japanese culture is easing up on tattoos, especially because they’re so common on Americans, but they historically are associated with criminality and organized crime in Japan. Displaying them is frowned upon.

This part of the trip was mostly about relaxation. We had good food at the ryokan and walked around. We rode a funicular up the side of Mt. Haruna and walked down. It was rainy, so we couldn’t see jack or crap. It was still beautiful. Check out this spooky playground, empty because of the rain: 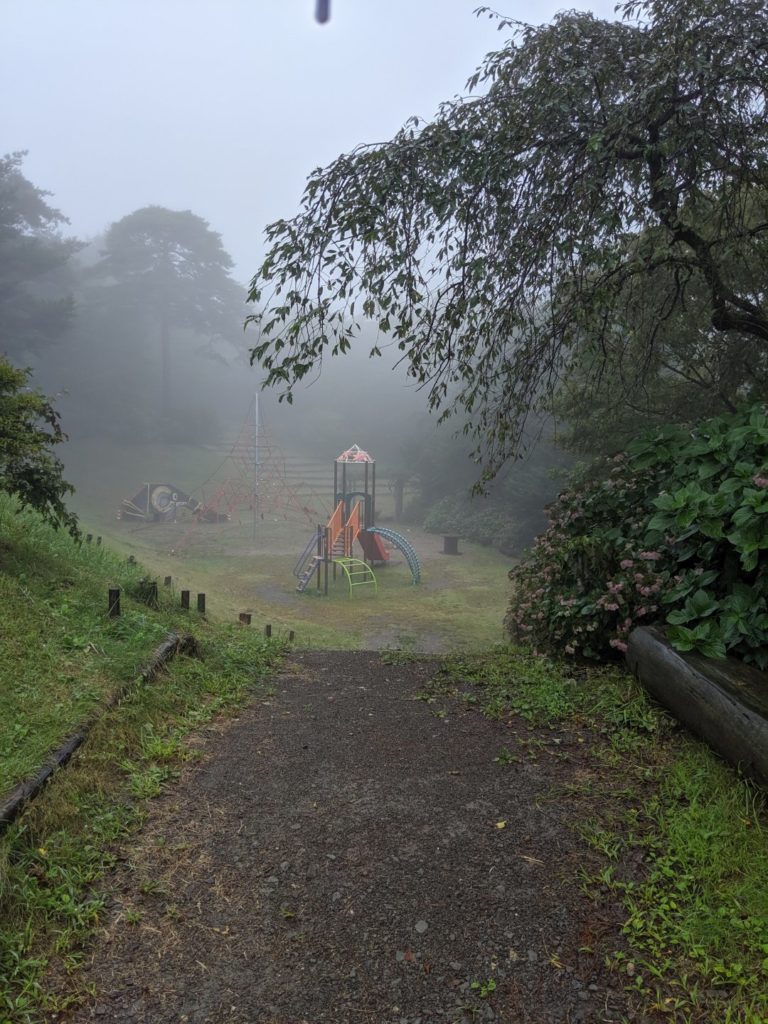 The rain let up eventually, and we had a chill night of playing games on my Sega Mega Drive and on the Nintendo Famicom someone else brought. Dr. Mario holds up, and I’m very bad at Puyo Puyo.

The trip was short, and then we headed back to Tokyo, then to Tokyo-Haneda International Airport. That’s right, the trip was over. Japanese security is way more chill than American, and I was on my plane before too long for a 10-hour flight back to Minneapolis. On the way, we had some of the worst turbulence I’ve ever experienced. We had one bump big enough to make the whole airplane scream! That was fun.

If I went back to Japan again, I’d be happy to revisit Tokyo. But if I had my choice? I’d love to see Hokkaido in the deep of winter when it’s covered in snow. Or Okinawa when it’s so humid that you can swim through it. I’d love to go to Osaka and eat. I’d love to go to any of the smaller cities and try their local specialty foods. It’s all there, and I hope I can get back before too long.