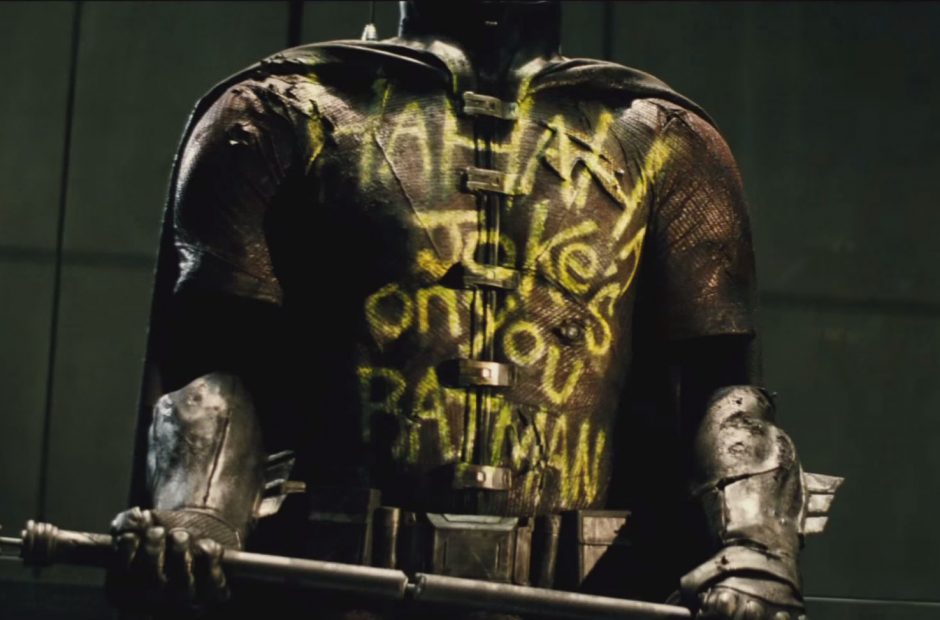 At long last, Zack Snyder has confirmed the identity of the murdered Robin hinted at in Batman V Superman: Dawn of Justice.

As we all remember, Bruce Wayne (Ben Affleck) pauses to look at a Robin costume that has been spray painted with “HAHAHA Joke’s on you Batman” in Batman V Superman: Dawn of Justice. Following the comic books this should have been the costume of the second Robin, Jason Todd. In the comics it was Todd who was taken down by the Joker.

Adding fuel to that theory is the fact a Nightwing movie is in the works. In the comics, it is the first Robin, Dick Grayson who goes on to become Nightwing later in life.

Now, thanks to a previously unseen bit of footage, director Zack Snyder appears to have cleared this up. A VFX artist that worked on Suicide Squad released a reel of their work which included unseen footage from the film. In it, Batman speaks to Harley Quinn after rescuing her from drowning and says, “Joker took something important from me, now I’m gonna take something from him.” Omer Kamal on Vero posted this line and simply asked “… Jason?”

Richard is the full name for Dick Grayson. So following this line, it was Dick Grayson that was killed by the Joker and not Jason Todd. What does this mean for the Nightwing movie? Will Warner Brothers just ignore this as it was never said on film? Could the Nightwing movie exist in its own universe like the upcoming Joaquin Phoenix Joker movie?

Snyder uttering one word actually appears to lead to more questions than it answered.