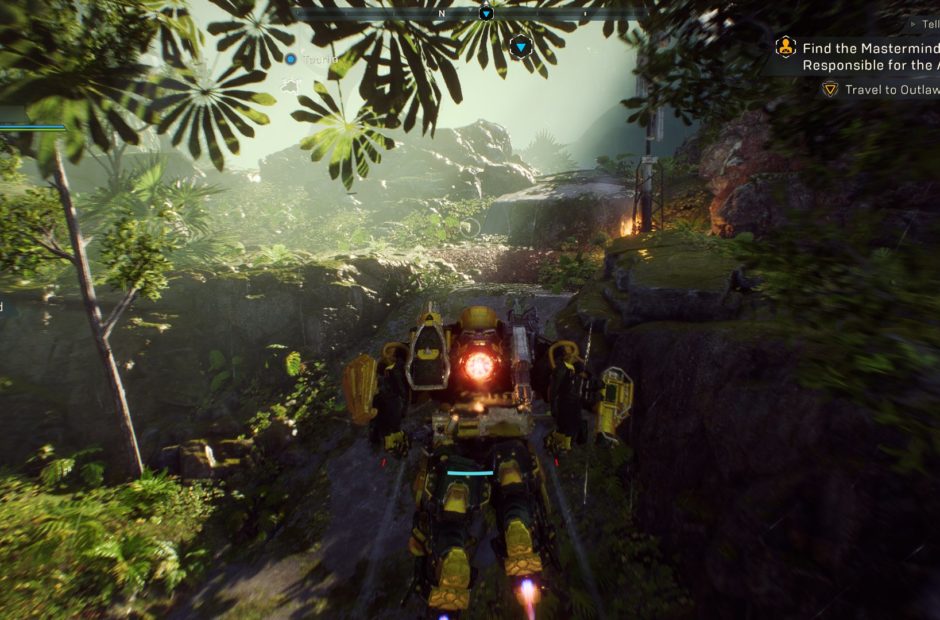 A quick glance back at 2019 would seem to suggest that it wasn’t a terribly interesting year for games. 2020 will see two new consoles and a pile of hotly-anticipated games like Cyberpunk 2077 and Ghost of Tsushima. Last year brought us Red Dead Redemption II, God of War, and Spider-Man. By comparison, we didn’t have any massive blockbusters, really, in 2019. We had big games, but we didn’t have any huge games. We had piles and piles of good and great games, though, and we spent the year mining them for some of the best gaming moments. Here are the moments from 2019 that made us stop and say “Hell yeah.” Expect spoilers for the following games: Control, Star Wars Jedi: Fallen Order, Sekiro: Shadows Die Twice, and maybe Death Stranding if you think that game makes enough sense to be spoilable. (Spoiler alert: it doesn’t.)

Electronic Arts’ Anthem had lots of problems. It still has lots of problems. I can’t think of a game that has landed with a thud as loud as that of Bioware’s service-game shooter. But for all it got wrong, it got perhaps the most important part right – so right that I enjoyed this pretty bad game for almost 40 hours before I finally fell off of it. 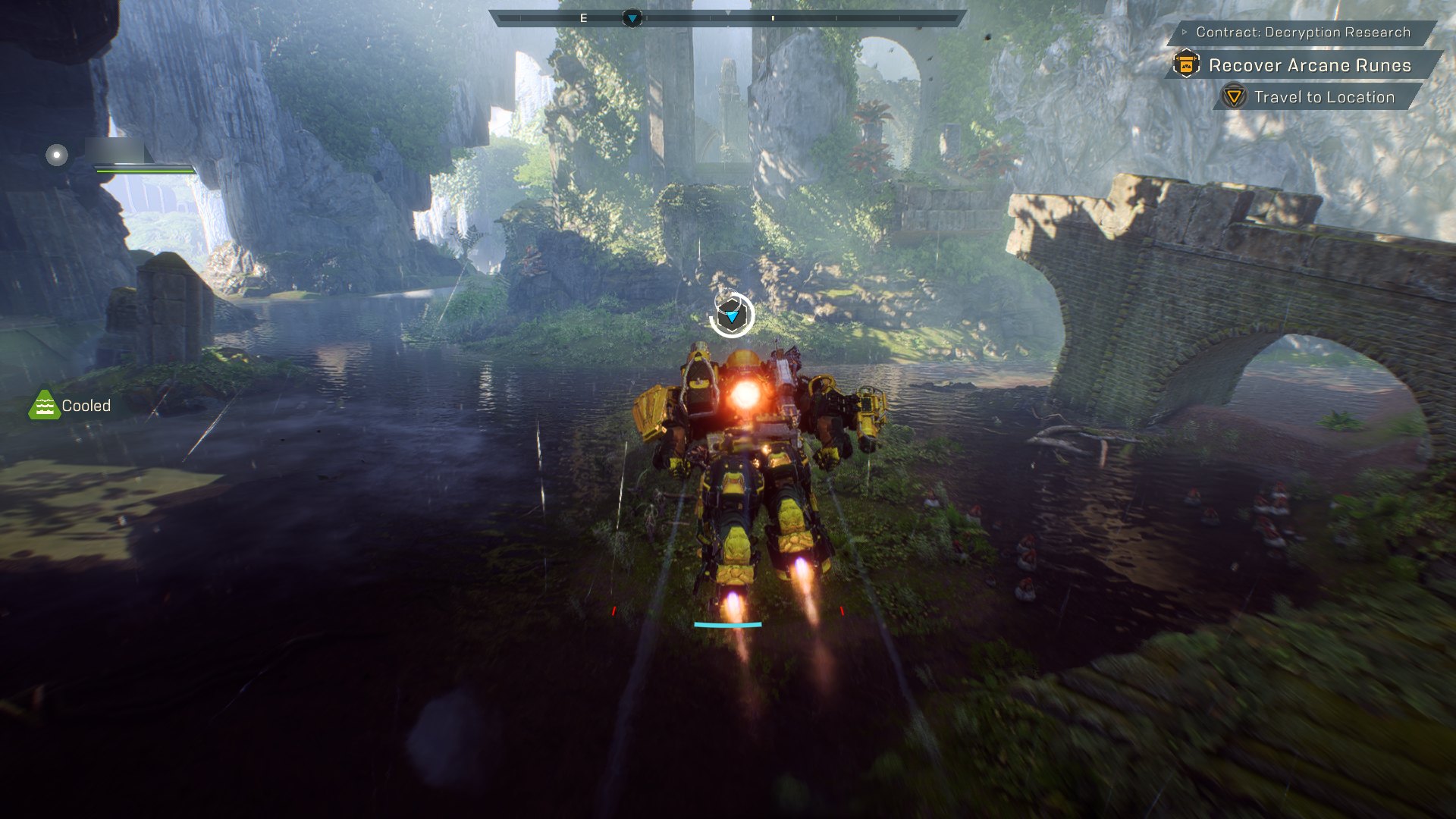 In short, Anthem is the fantasy of being Iron Man turned into a sci-fi fantasy game. I’m not going try to sum up the plot because I legitimately can’t remember a single part of it. Anthem lets you pick from one of a few different mechs and then take on monsters and humanoid enemies with all manner of ranged and melee attacks.  Getting around is done by flying, but you can’t fly forever. Your Javelin suit is constantly heating up, forcing you to land for a few moments to let it cool down. And so Bioware filled its world with bodies of water you can buzz and waterfalls you can dip into to cool off, sharp drops so that you can let gravity do the work. The whole world is an obstacle course challenging you to maximize your flight distance and do some cool stunts along the way.  Any single moment of flight in Anthem is worthy of this list.

Control is, without a doubt, my favorite game of 2019. Just months later, I’ve already played through it again. One moment stands out above all others, though: the Ashtray Maze. On the upper-most floor of the Oldest House’s research wing, there’s a side wing called Dimensional Research. If you venture in, you’ll find an unnavigable ring of rooms that look like an endless Lynchian hotel lobby. No matter how quickly you move, hallways close over with shifting walls. 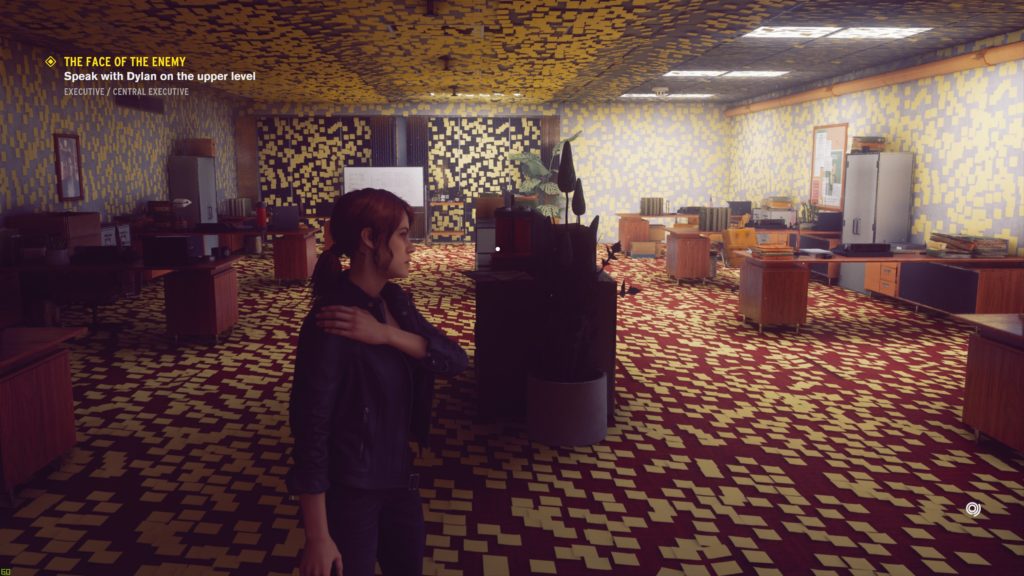 It’s not until much later that it starts to make sense why. The Finnish janitor, Ahti, who always seems to know more than he’s letting on, gives you an old Walkman-style portable music player. It even looks like a classic Sony with the yellow plastic body, wire-frame headband, and yellow earpads; it’ll help you make it through the maze, he explains. You re-enter Dimensional Research, and put on the headphones and shit starts popping off immediately. A song by the in-world band Old Gods of Asgard starts playing–the same Old Gods of Asgard that are featured heavily in Alan Wake–and the maze begins to shift.

This is absolutely wild amounts of change to the level design. It’s one of the best magic tricks I’ve seen in games not just this year, but ever. It perfectly caps off the strange place you’ve been wandering around for the last 20 or so hours with an exciting full-sensory action sequence. 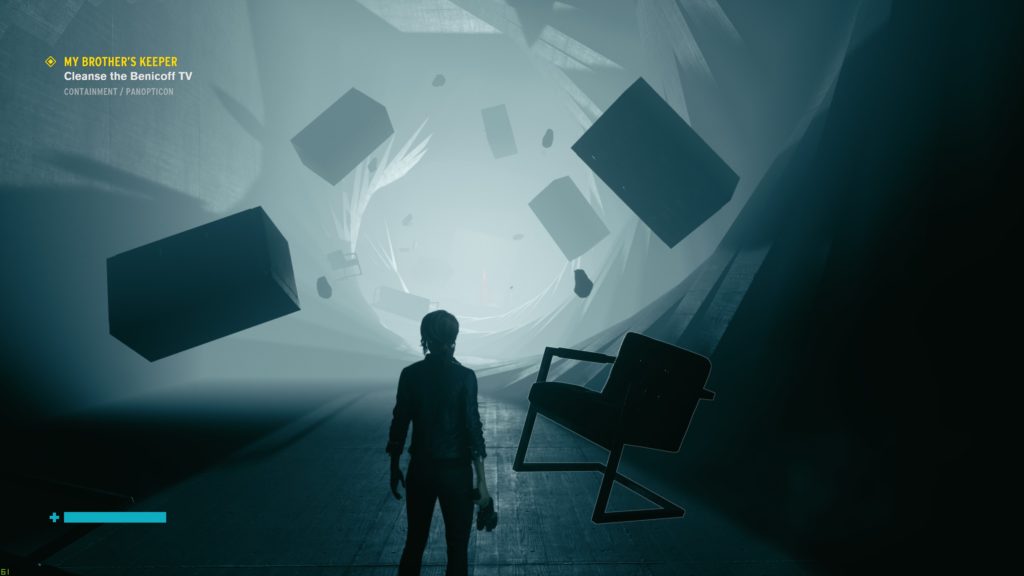 I have tons of issues with SWJFO (pronounced Swijiffo), but all the work is worth it for this moment in the story. After battling your way to a Sith base, you fight the Second Sister. Cal Kestis is able to get through to the Second Sister and make her re-think her commitment to the Dark Side of the Force. 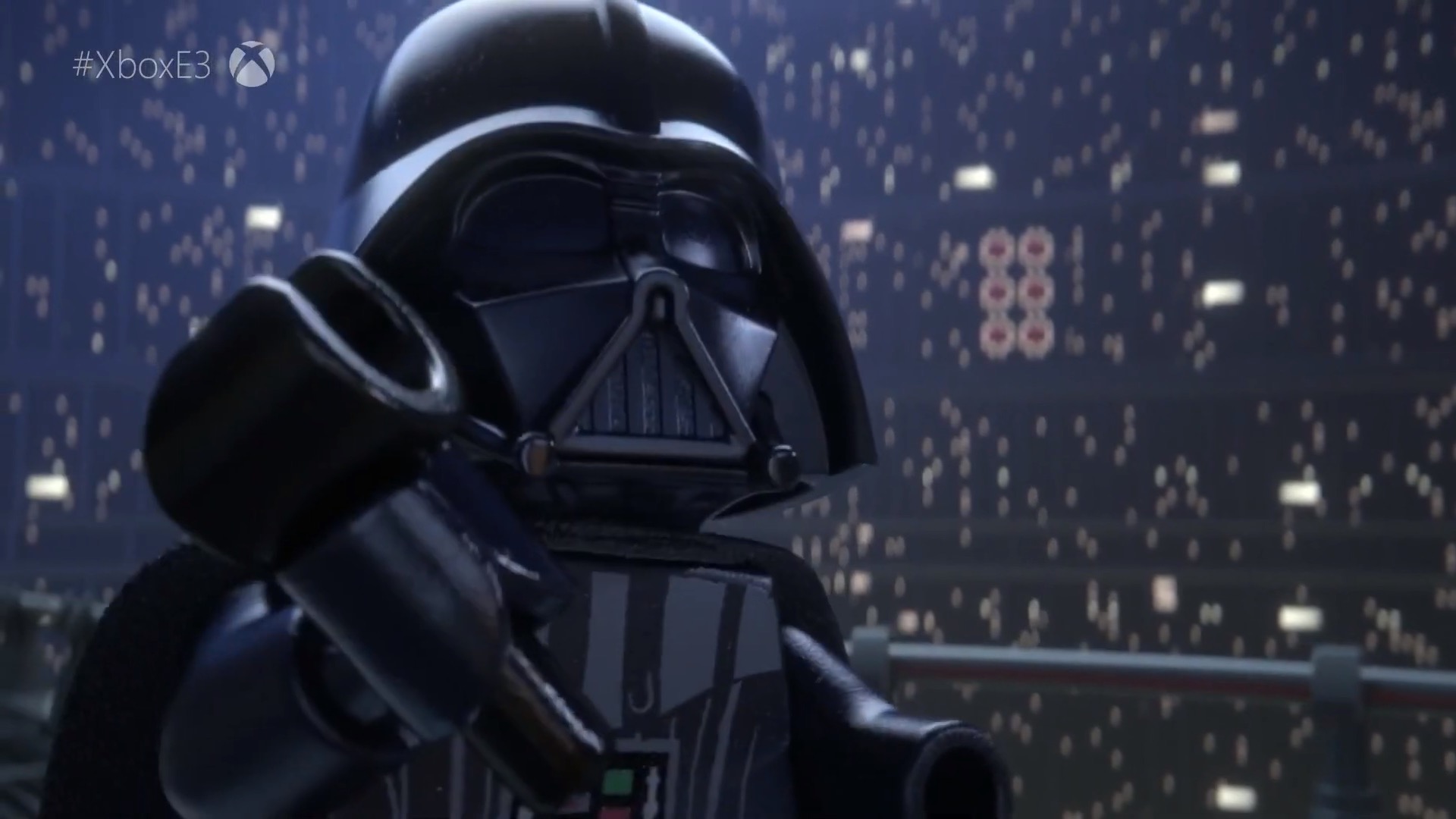 Okay, it wasn’t this Darth Vader…

And that’s when Darth-flipping-Vader bursts through the door like a nightmare Kool-Aid Man. This isn’t a fun cameo battle, though. This is like Jason Voorhees slamming through a door to a room full of teenagers doing drugs and having sex. Cal tries to put up a fight, but it goes badly and Cal is forced to run for his life. Vader tearsup the base behind Cal as he runs, and for once Vader isn’t just a Cool Evil Guy. He’s a terrifying monster. He’s a horror show. This is the Darth Vader we were promised but have really only ever seen in Rogue One: A Star Wars Story. It’s awesome. I’m just glad I hit that scene before EA dumped it into an advertisement for the game.

Leon S. Kennedy and Claire Redfield, the twin protagonists of Resident Evil 2 (check out our review), have one goal: survive. Nothing is ever that simple, though, and they’re soon pulled into the Umbrella Corporation’s sprawling web of intrigue in the name of simply seeing the next sunrise without any bite marks they didn’t start the day with. 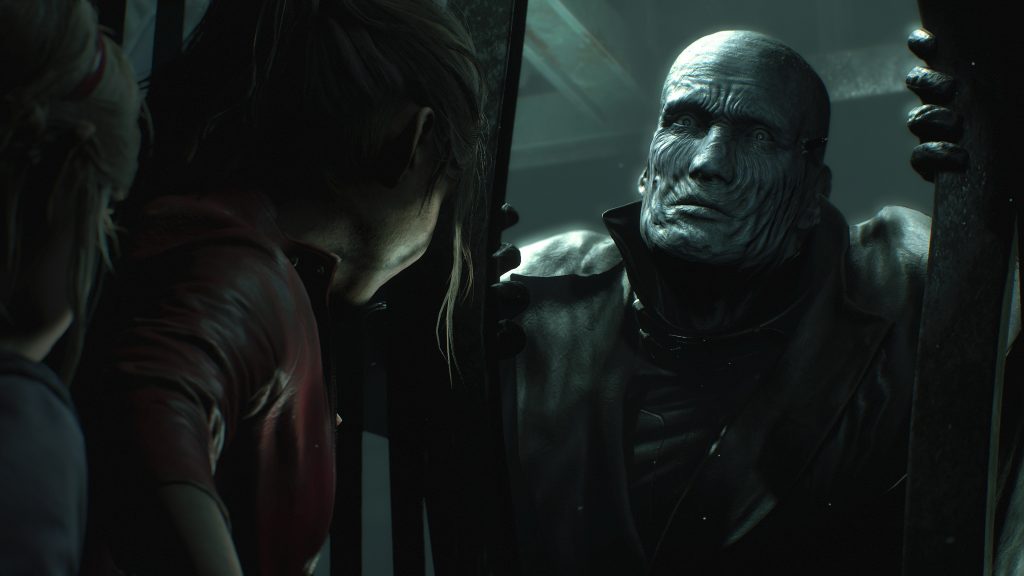 Umbrella, however, has a vested interest in no one finding out that they, whether accidentally or not, unleashed a bioweapon on Raccoon City, and so our heroes find themselves pursued by Mr. X, a terrifying giant with porcelain-white skin and a dapper fedora and trenchcoat.

Mr. X is unstoppable. He’s utterly unkillable without the intervention of a powerful explosive or some construction gear. All you can do about Mr. X is run. And so for hours, you run. He pursues Leon or Claire through the Raccoon City Polic station and beyond. The whole time, though, you can hear him. From the floor above, from the next room, you can hear Mr. X’s heavy footsteps pounding into the sturdily-constructed floors of the old police station. He’s ever-present and inescapable. Even when he’s not in the room, he’s only minutes away.

The audio design of Mr. X’s footsteps echoing through the police station alone is great, but the way it ramps up the tension of exploring the mostly-abandoned, zombie-infested fortress is pure art. The whole game is an exercise in perfected notalgia, but this stands out as some of the team’s best work. 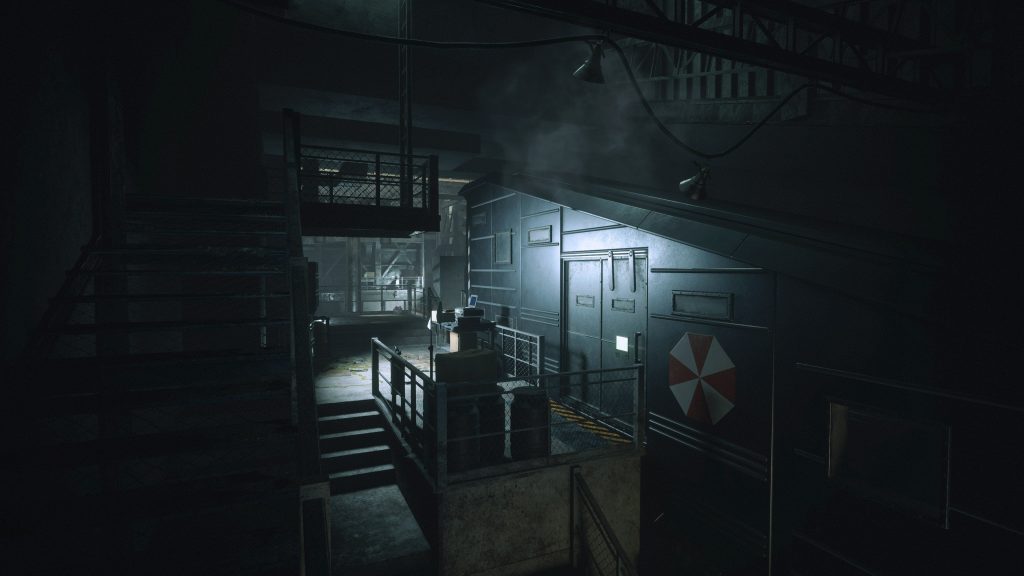 Yo, Sekiro is a fiercely difficult game. Even if you have the skill to beat it, you still need the patience and temperament. While I’ll freely admit that I didn’t have the patience or temperament to finish the game completely and see the credits roll, I put up a good fight and made it through one of the game’s most challenging fights. After ascending to the top floor of a Japanese castle, you find yourself face to face with Genichiro Ashina. This multi-stage fight has you blocking brutally-damaging arrows and clashing swords with the samurai. If you work hard, you might make it to the second stage of the fight, where you find out that Genichiro can summon lightning in an utterly devastating attack.

The counter is a simple one, but timing is key. Missing it results in a swift and merciless death; nailing it send a bolt of lightning down the end of your blade and into your opponent, hurting and stunning them. Getting the reversal right is the difference between winning and losing this difficult battle. Getting it right feels exciting and satisfying and powerful. It’s a major moment in one of the toughest battles of the game. Almost as tough as that horrible ape that throws its poop at you.

Hideo Kojima’s Death Stranding was met with a mix of fevered excitement and wary skepticism. The Japanese game director is known as much for nonsensical stories as he is for deep gameplay. In that way, Death Stranding might be the most Hideo Kojima game that Hideo Kojima has ever created. It’s endlessly playable and has a nonsensical story that makes even Metal Gear’s story look pretty straight-forward by comparison.

It’s the playability that matters, though. Death Stranding has you walking through the post-apocalyptic but still verdant and mountainous countryside of the former United States. As Sam Porter Bridges, you deliver packages to the small outposts humanity has put up in the face of certain extinction. The veil between life and death has torn open and stranded beings called Beached Things hover invisibly. You can avoid them, but eventually, you’ll stumble across one by accident. When your, oily, pitch-black hands rise from the ground, pulling you down and dragging you across the map. There, in a sea of this pitch, you battle a huge BT with the meager resources you have while trying not to get dragged down into the mire.

The first time I got dragged down startled me. Eventually, fighting BTs would stop being scary and become something I sought out, but the time the hands pulled me down and dragged me was startling and intense and a great way to kick off one of my favorite games of this last year.

Those were some of our favorite gaming moments of 2019. What were yours?