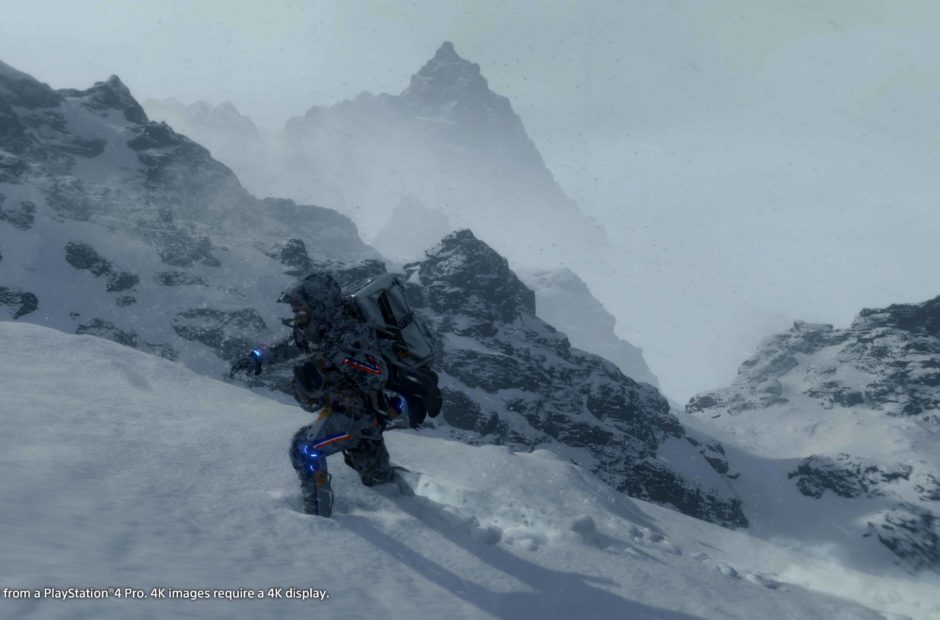 Getting around is the most important part of making an open-world game feel good. We laud games like Spider-Man for making traversal fun and exciting, and we bemoan the necessity of fast-travel options in games like Skyrim. And now comes Death Stranding. If Death Stranding is about anything–mechanically speaking–it’s about walking.

The gaming community has developed the term “walking simulator” to describe low-interaction games; games without combat, acrobatic movement, or puzzle work. Death Stranding, however, is a walking simulator in that it simulates walking. 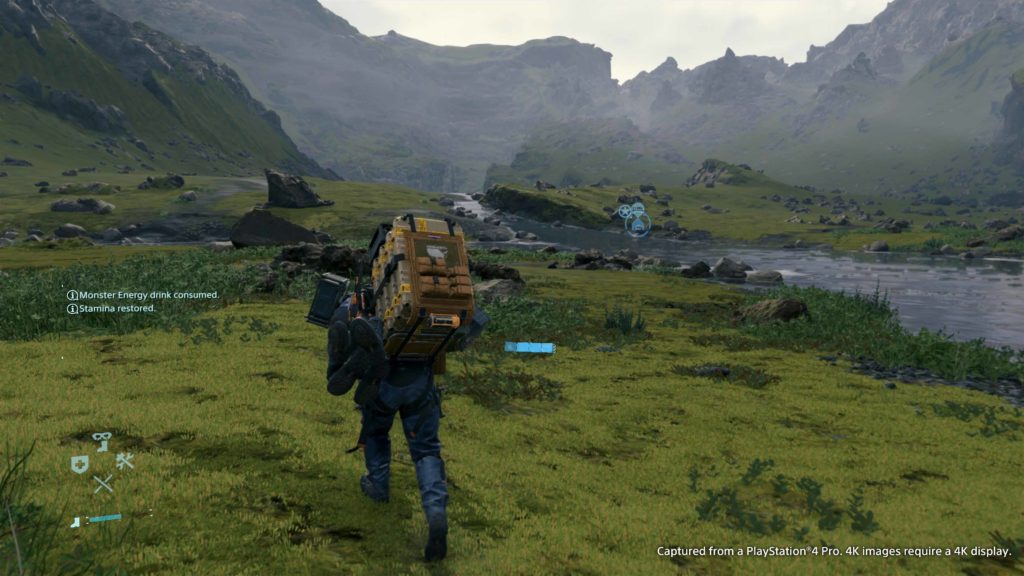 In other games, walking is the last thing you want to do. In fact, simply pressing your control stick forward puts you into a full run. In Death Stranding, though, walking is everything. It really is about the journey rather than the destination, just like the cliché says. Walking in Death Stranding isn’t just about holding forward on your analog stick. It requires active engagement, planning, and problem-solving.

Our protagonist, Sam Porter Bridges, has his occupation right there in his name. He’s a porter, meaning that he carries and delivers packages. Wherever you go in Death Stranding, you’re weighed down by the packages left in your care, sometimes to the tune of hundreds of pounds. Like a backpacker, every movement you make as Sam has to take that load into account. 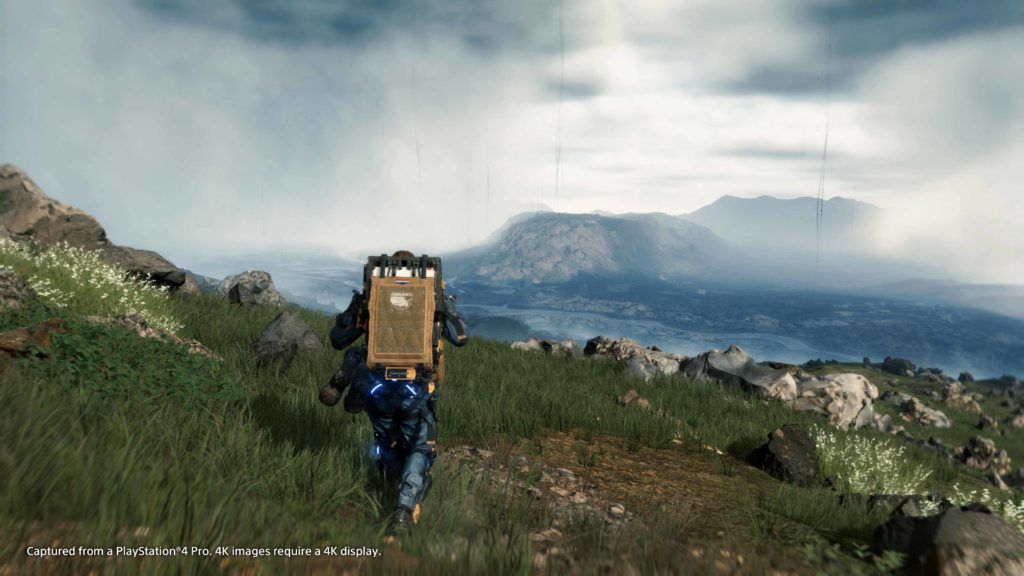 The center of gravity you’re used to trusting as sitting somewhere in the middle of your torso has moved back and up into your cargo. Walking in a straight line is about all you can do without throwing off your balance so badly as to make it nearly unrecoverable. Some planning–arranging your cargo efficiently, scoping out your route, checking weather reports–can mitigate some of the struggles, but going down a hill can quickly turn into a chaotic tumble if you don’t maintain balance and watch your every step.

A cataclysmic event destroyed most of the civilized parts of the world of Death Stranding. The world that remains is unrecognizable and is littered with the rocky debris of the world before. To walk in a straight line for more than a few seconds will almost certainly have you climbing over knee-high rocks at the very least. That displaced center of gravity makes even these small rocks into huge obstacles. The hills, mountains, and cliffsides that you also have to help Sam over become gargantuan. Spider-Man can whip up and over entire buildings in a few easy movements, but Sam has to plan his way up a gentle slope. Even the vehicles you can eventually build are not a fix-all answer to this problem. Eventually, you’ll have to get out and walk again. And, weirdly, this works. It’s fun to plan these treks out and to usher a package to its destination. 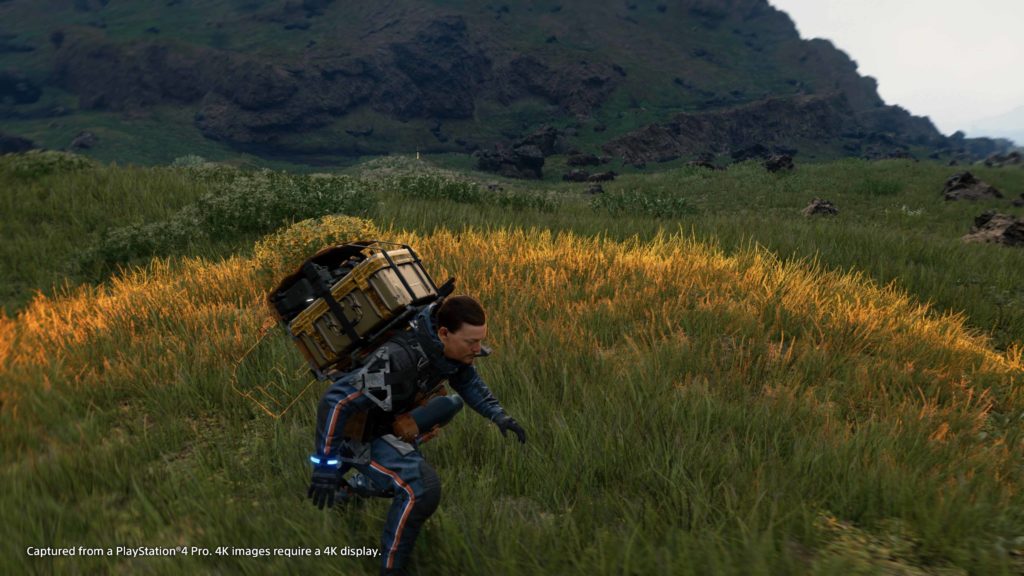 Death Stranding‘s map offers yet another way to turn the idea of simply walking between two points into an adventure. Death Stranding doesn’t stop at giving you a map, because its world is too complex for an overhead 2D map to work on its own. While most games stop at letting you assign waypoints on your map, Death Stranding lets you plan out the entire route and lets you keep other routes.

In addition to building bridges and highways in the actual game, Sam acts as a cartographer of sorts, building his own map of optimal paths between frequent destinations. This is assisted by the game’s first-person view, which layers an AR-style compass over the map. Successive waypoints are given alphanumeric names (A1, A2, etc), and these waypoints are then visible on this map. You’re not just picking out a point and running straight toward it. You know that you have to turn north at A1, and then west at A2. Even elements like weather can be accounted for in this mapping as you progress through the game. Where you go how you go about getting there are both entirely in your power.

The term ‘Walking Simulator’ is used as a pejorative in gaming, but Death Stranding makes a good argument for why a true walking simulator makes for a fully-featured game all its own.