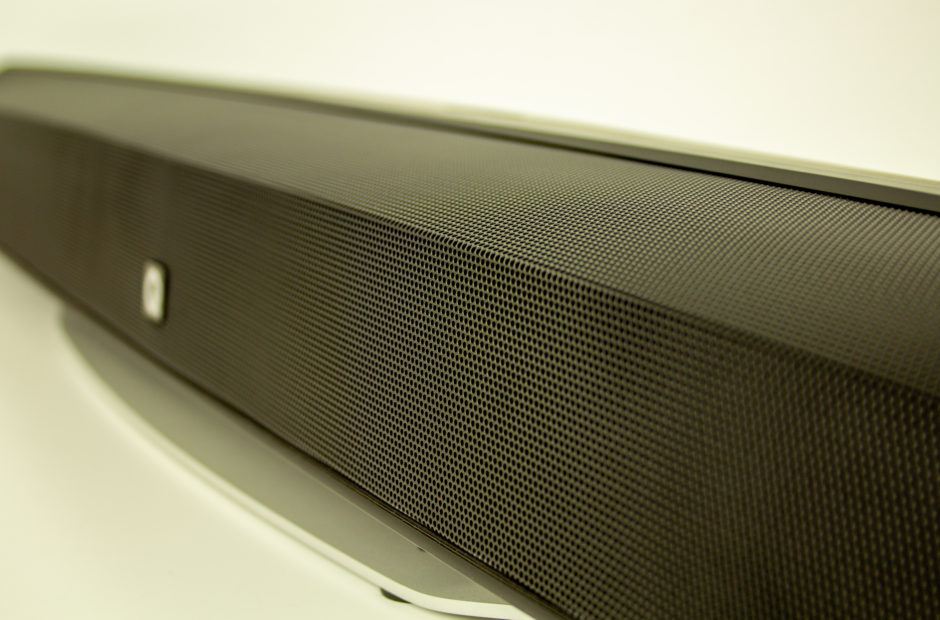 Is it possible to love a piece of tech and loathe it at the same time? It must be, because that’s the best way to describe how I feel about the Q Acoustics M3 Soundbar, a great piece of audio technology with some truly annoying glitches. After easy setup, I was treated to consistently enjoyable sound, and inconsistent behavior. Let’s look at what what works and what doesn’t.

The M3 Soundbar is a pleasure to setup and use in general. It’s better looking than a lot of soundbars thanks to a simple but angular styling. It’s not the boring rectangle that most soundbars are, but it’s not over the top, either. 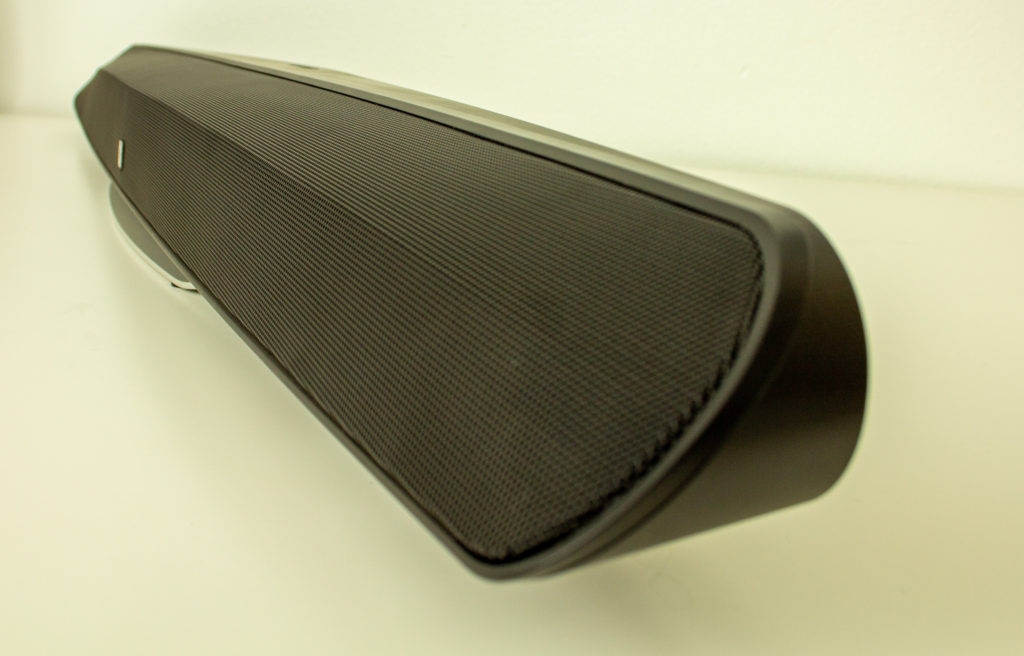 The front simply has the Q Acoustics logo, while the top features just three buttons: power/input, volume up, and volume down. The power button is the only light on the whole thing, and serves to indicate both whether the device is on or not and to what input it’s currently set (pink for HDMI, Blue for Bluetooth, etc.)

On the back, you’ll find an Audio Return Channel-compatible HDMI port, optical, RCA, and 3.5mm ports. There’s of course Bluetooth connectivity, and that features the aptX codec for relatively good quality sound, and NFC-based paring – one of my favorite features for a Bluetooth speaker these days. While there are a ton of ports, though, Q wants you to use HDMI; it’s the only cable aside from power included in the box.

Q Acoustics wants you to be able to put this soundbar wherever you want, so it also has a switch to toggle based on whether you’re putting it on a cabinet, in a cabinet, or wall mounting it. I had mine on my glass-top cabinet for the duration of the review period. How you set the switch will determine which sound EQ the bar uses for ideal sound.

Thanks to the number of connection options, setup is a breeze. Just set the switch and plug in the cord you want.

Also in the box is a small remote. It’s the worst, and I hate it.

The small remote includes power, volume, mute, and input buttons. The remote is small and easy to lose, and mind-numbingly slow to use. It also seems to take laser-precision aim to get it to hit the receiver. I often was lifting my arm up and firing the remote downward to get it to change inputs. 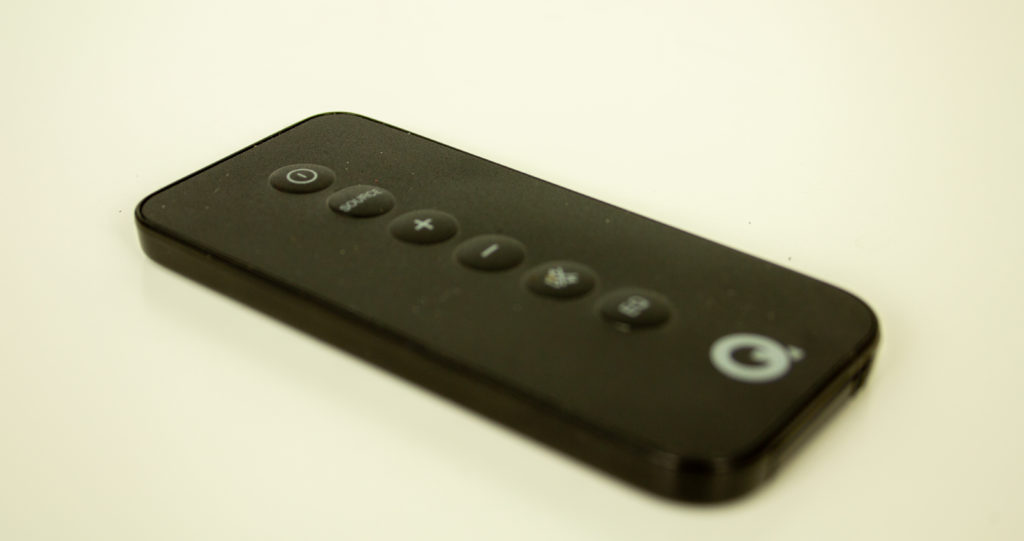 This is mostly mitigated by the presence of HDMI ARC. The soundbar does a good job of detecting when you activate an HDMI port. It turns on and sets to HDMI ARC mode and sound plays seamlessly. Because it’s ARC, you can use your TV remote to change the volume and mute it.

But that’s where we get to the very noticeable glitch I experienced. I want to offer the caveat that this could be a simple matter of incompatibility between my Samsung KS8000 UHD TV and the soundbar, or a glitch with the TV itself. I don’t have another ARC-compatible TV to test with, so I can’t say for sure.

With that said, here’s my experience.

Generally, when playing stuff directly off my TV, my Roku box, or my Xbox One X, the soundbar was responsive. However, when using my PlayStation 4 Pro, the soundbar would often not output sound despite showing the correct output on the soundbar’s LED. If you have this particular television (which is a relatively common one, all told) or are rocking a PlayStation Pro, you might want to think twice about buying this soundbar.

Putting the glitches and the terrible remote aside, I actually really liked using the M3 soundbar. The soundbar packs everything you need right into the bar rather than breaking the subwoofer out into a separate box. There’s a 100x150mm subwoofer pushing noise out of the bottom of the thing, joined by a set of 58mm drivers.

The M3 does a great job of filling the room with sound. If you’re looking to rattle your windows, of course you’ll want to pick up a soundbar with a separate subwoofer – or just go with a full home-theater-style setup. But for apartment dwellers looking to get the most out of the TVs or a slightly more subdued home theater, the M3 is a great choice. It goes quite loud without distorting and delivers audio clearly across the board. I played dozens of hours of games on it, from PS4 games Spider-Man and Resident Evil 2 to Xbox games like Dragon’s Dogma, Sea of Thieves, Sekiro: Shadows Die Twice, and more. 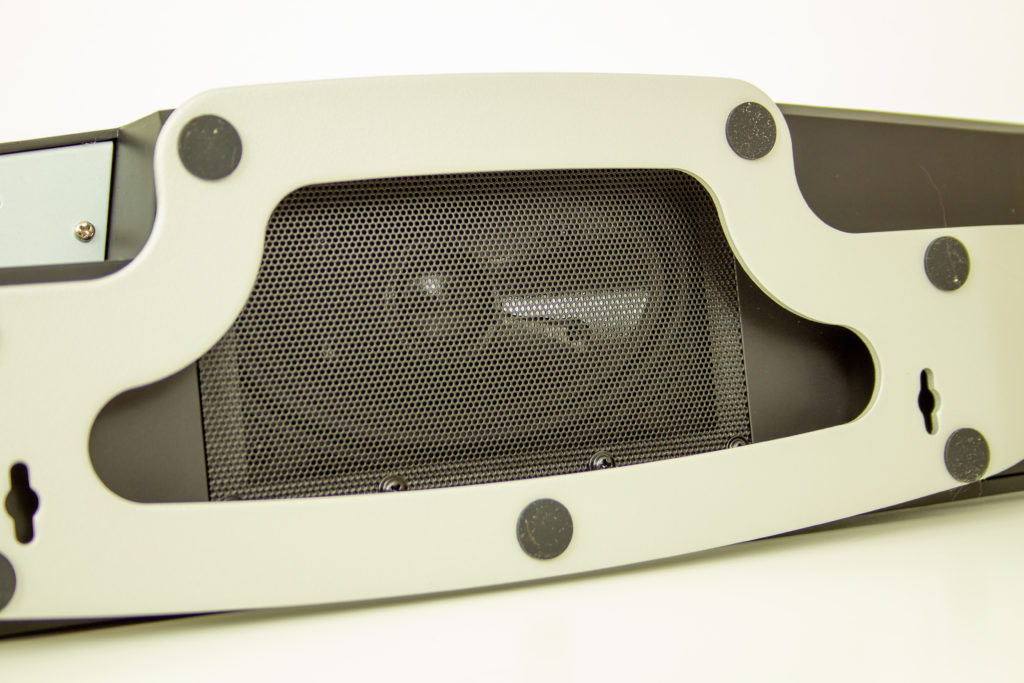 Dialogue-heavy games like Spider-Man sounded great, while action remained crisp and clear. Games that focus less on dialogue and more on action were satisfying as well, with the sword clashes in Sekiro coming across loud and clear.

I want to give the M3 accolades without condition, but I just can’t overlook the quality of the remote, especially when taken in conjunction with the glitch I experienced. The ARC compatibility means that the vast majority of the time you’ll be able to control the M3 with your remote, but if an issue like mine pops up, you may find yourself reaching for the included remote more than you’d like.

Setup is easy. The soundbar itself is flexible in terms of positioning, and you can plug tons of different stuff into it. But if you’re going to pick it up, make sure to really give every device in your home theater a workout while it’s still in the return period – just in case.

DISCLAIMER: We spent hundreds of hours watching television and movies and playing games before starting this review. We received a review unit from from the manufacturer for the purposes of this review.