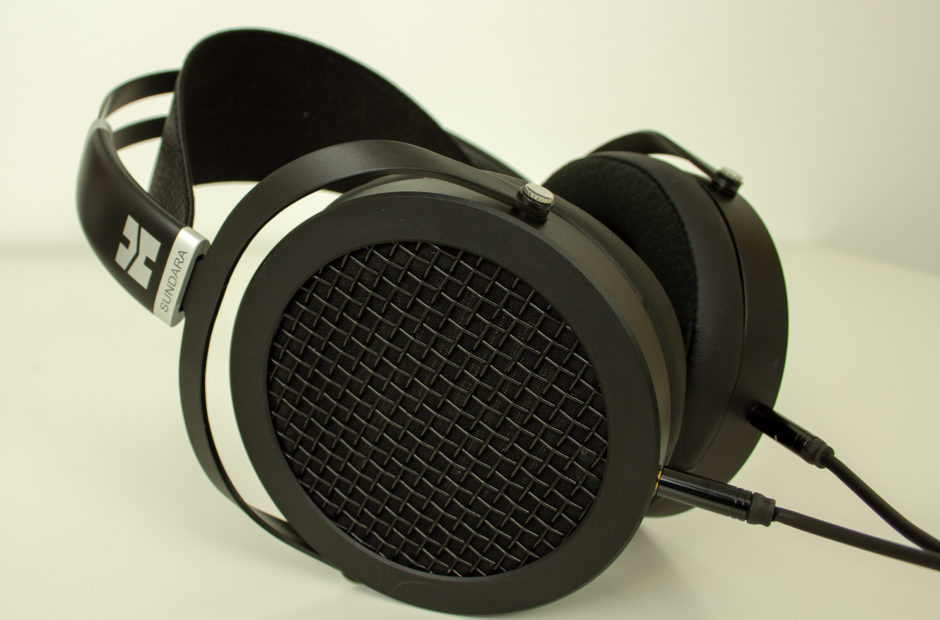 While lots of technologies – microchips, screens, wireless signals – have raced ahead, one has stayed pretty static. Headphones are more comfortable and attractive than they were 20 or 50 years ago, but the technology inside still works on largely the same principles of an electromagnetic coil causing a diaphragm to vibrate when electricity runs through it. It’s stayed that way because, honestly, it works well and it scales up and down pretty well. But there’s a new kid on the block in the last few years that wants to have a word: planar magnetic drivers. It’s still pretty new tech, but it has the capacity to be stunning if you’re willing to pay the right price. One such example is HiFiMan’s Sundara headphones. These open-back, planar-magnetic headphones go for $499. How do they measure up to traditional headphones? Are they worth that pricetag? 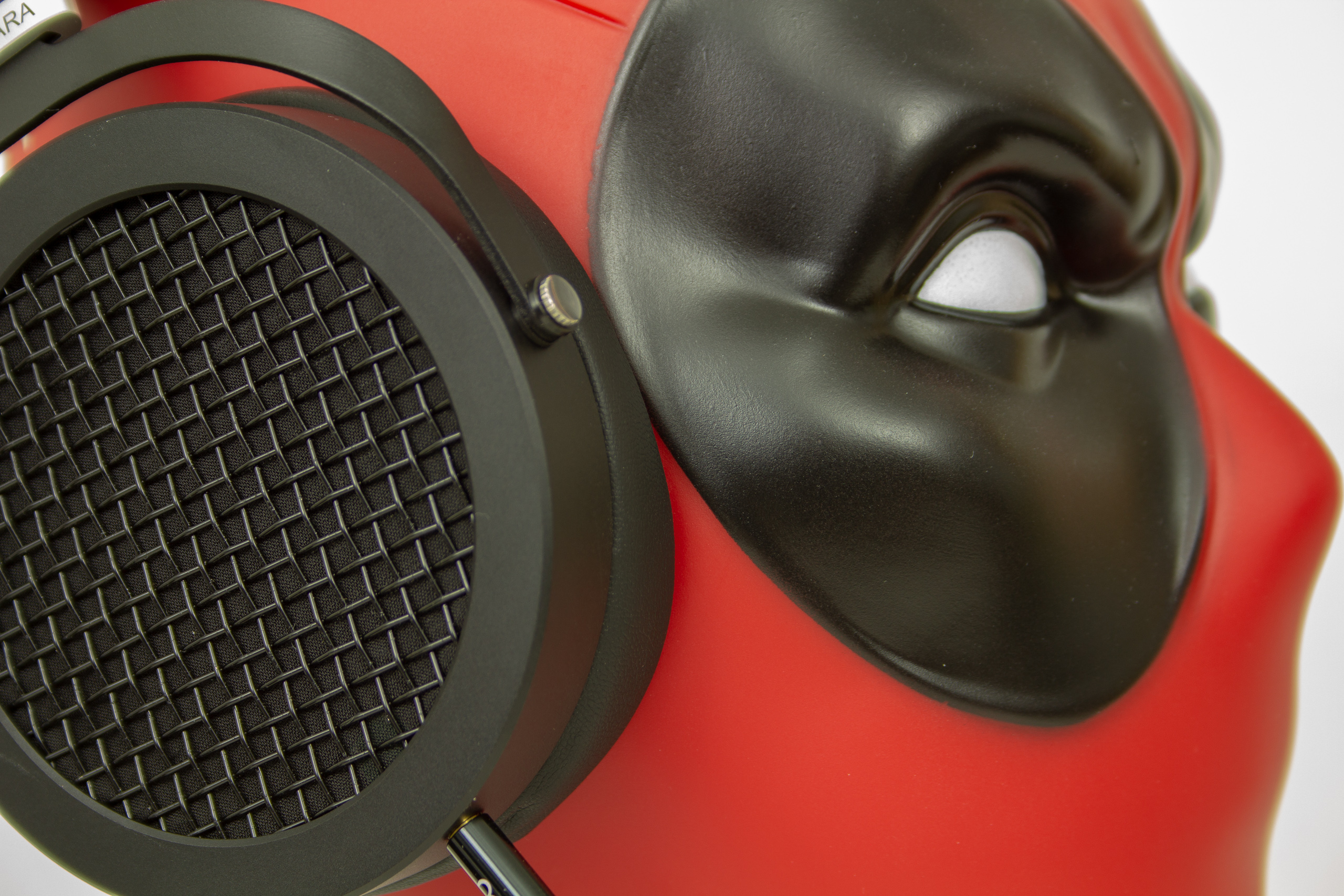 Dynamic drivers work as we described before: an electromagnet pulls on a coil that causes a diaphragm to vibrate, which lets us hear Carly Rae Jepsen’s smash hit, “Call Me Maybe,” on speakers, headphones, and earbuds alike. They’re super common and the chances that you have a set of these are near 100% if you’re reading this. Planar magnetic drivers still have the diaphragm, but they don’t have the cone. Instead, the diaphragm is moved by a pair of magnets on either side. Planar magnetic drivers are bigger than dynamic drivers, in general, and consume more power, because the magnets have to cover the entire surface of the diaphragm.

The result is supposed to be that planar magnetic headphones offer better bass response compared to headphones of a similar caliber, and are supposed to in general offer a better soundstage. They are also supposed to offer lower distortion. They’re harder to manufacture and harder to keep consistent, so they’re more expensive and, thus, aimed at the kind of people who sit and listen to music and do nothing else.

Knowing that going in gives us a baseline by which to judge the Sundaras. For me, these are my first pair of planar magnetic headphones that I’ve had a chance to spend a lot of time with.

With all that laid out, let’s talk about the Sundaras themselves. 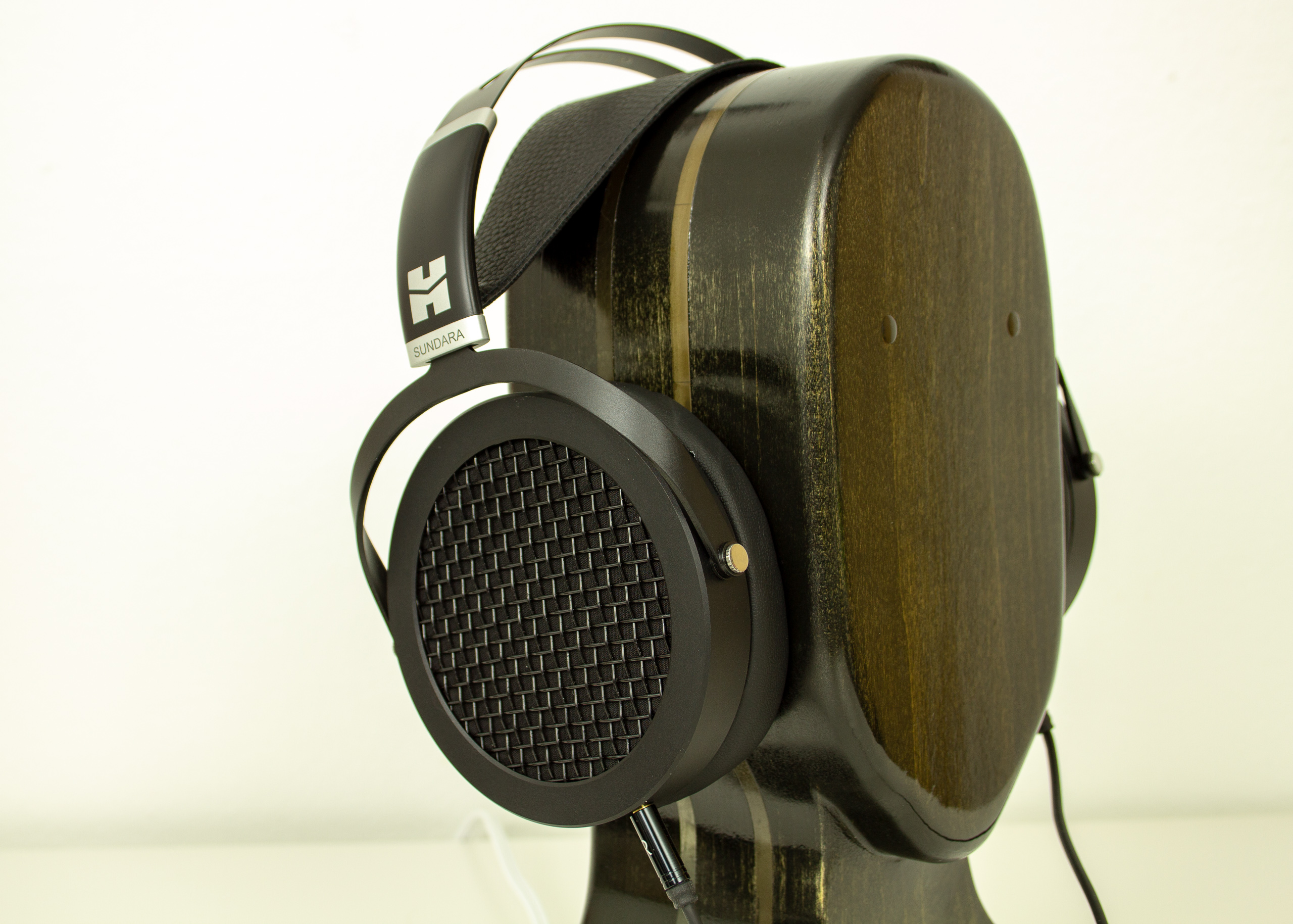 Generally speaking, I love the way the Sundaras look and feel. They’re big, simple, open-back headphones. Everything that isn’t black aluminum is black faux leather, with a few spots of plastic here and there.

The overall look is “matte black,” though a few silver-grey highlights adorn the sides, along with the HiFiMan logo.

The big earcups fit over my pretty average-sized ears easily, and the Sundaras sit comfortably on my head for hours of wear. There’s enough room for my ears and, of course, there’s plenty of air movement. The leather strap suspends the headphones comfortably, and adjusting the length of the headphones is easy. The cups rotate vertically a full one-eighty, but they don’t swivel from side to side in the yokes at all. This seems like a major oversight and it’s pretty disappointing. 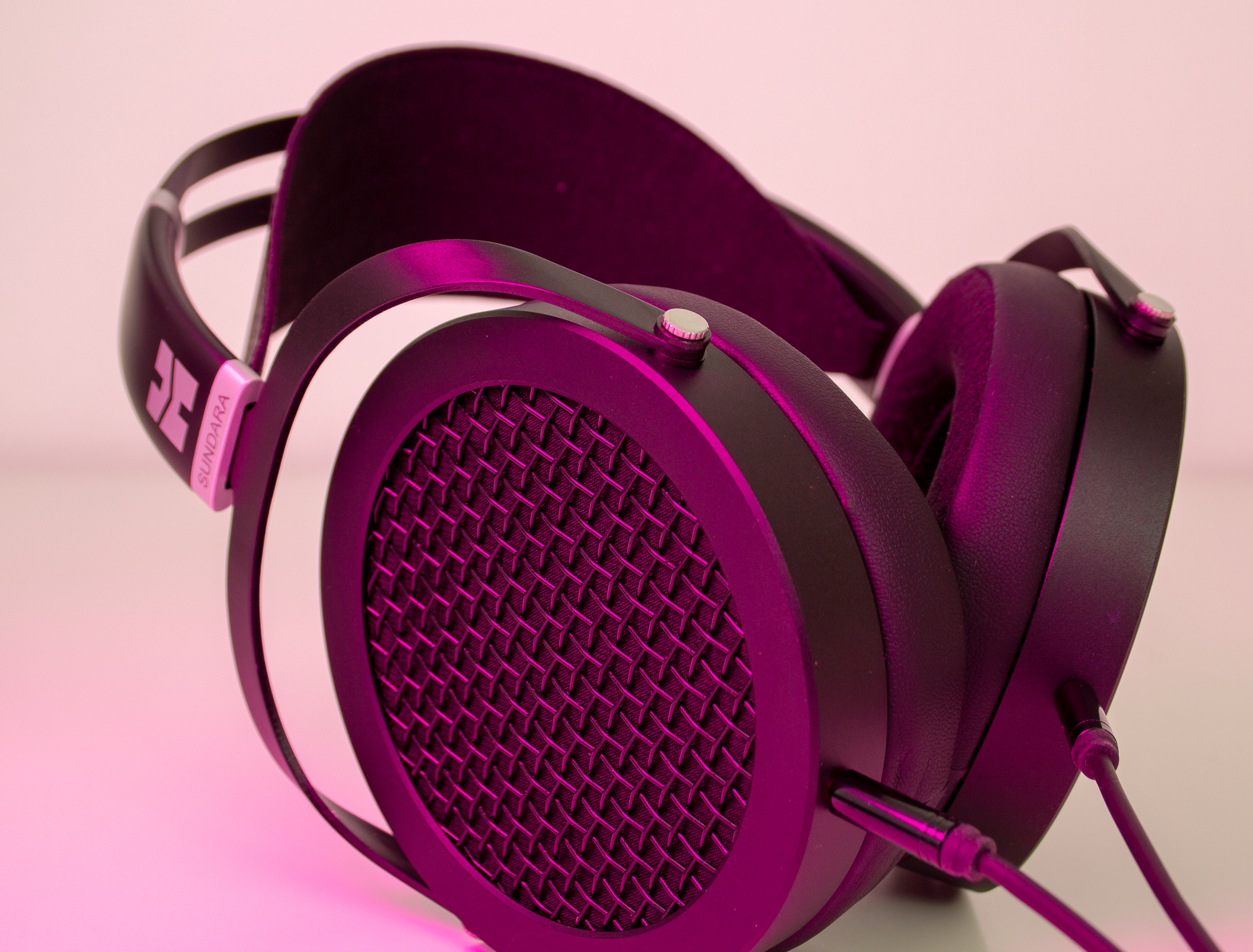 Where my impressions of the Sundaras take a tip is the cord. The cord is detachable, which is a must at this price. The cord itself isn’t terrible, but it’s not my favorite. It’s a bit under 2m long and terminates in a gold 90-degree 3.5mm jack. It has a springy feel that makes it feel like it’s moving on its own rather than resting where I put it.

On the headphone side are a pair of 3.5mm jacks that plug into the headphones. These are labeled left and right for easy assembly, but that’s about all I like about them. They’re not terribly attractive and, worse, they feel really weak compared to the overall sturdy headphones themselves. They feel like they could snap off. 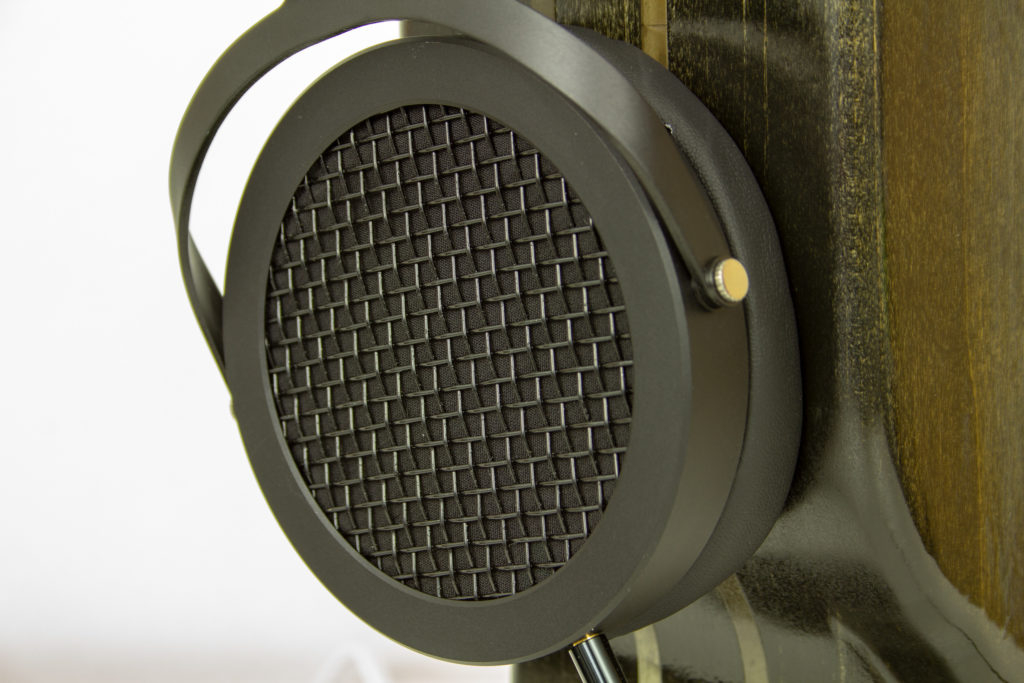 The Sundaras are open-back, over-ear headphones, so they don’t seal out sound at all. In fact, I’d say they’re less headphones and more like head speakers. They’ll be noticeable to others like second-hand smoke. 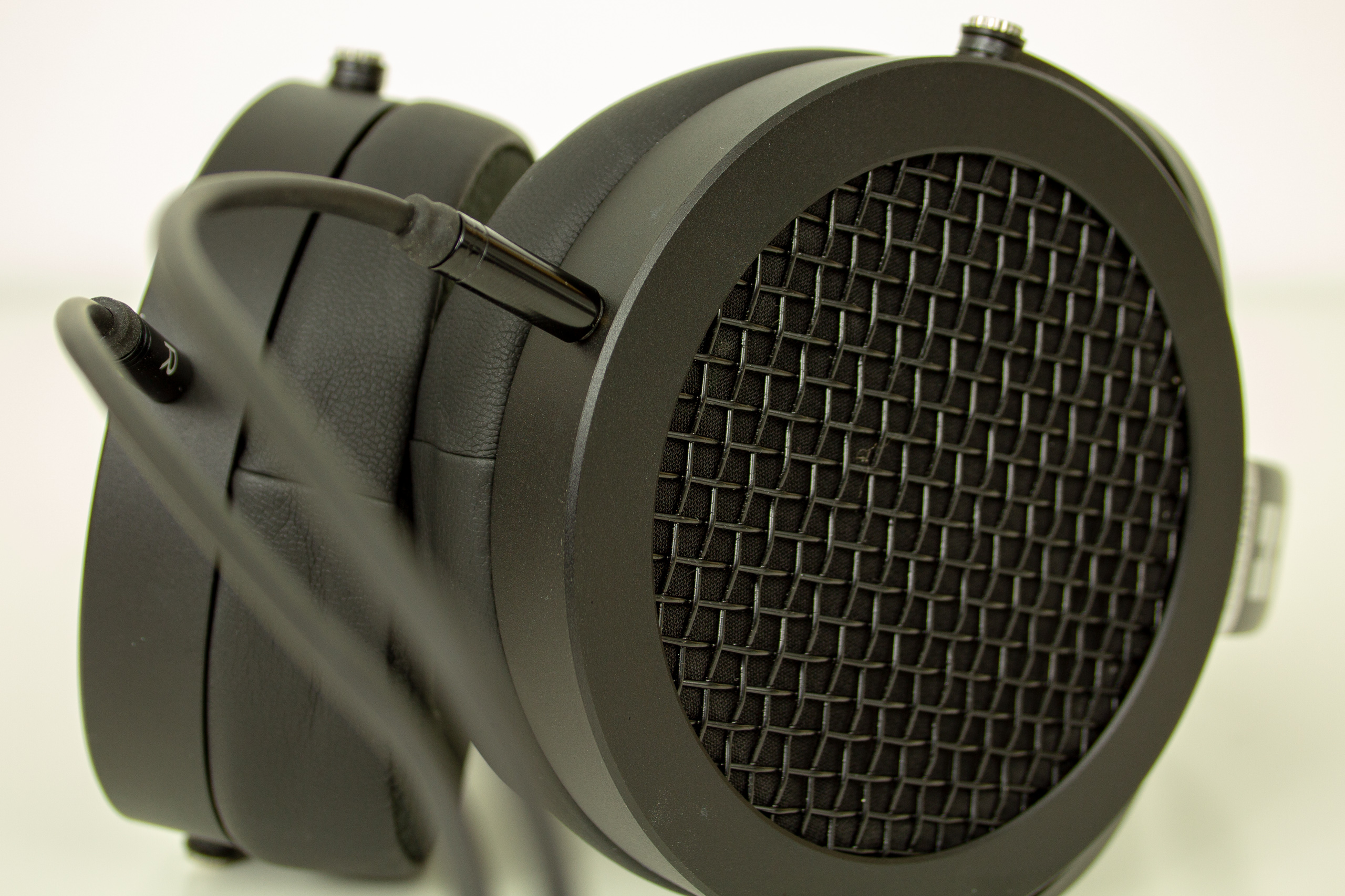 That alone is going to severely limit their appeal if the price hadn’t already. They’re also open-back, which means that not only do they not keep sound from getting out, they let sound in. The click-clack of my keyboard is plain as day. I actually like that; it lets me get the benefits of wearing headphones while still being able to hear doorbells and phones.

What if you have the amp to drive the Sundaras and the privacy to enjoy them, though? They sound really nice.

The Sundaras have a smooth feeling to the overall sound. I have louder headphones, but even headphones I generally enjoy feel harsh in comparison. I would describe the overall sound profile as “accurate.” The highs and lows are present, but the Sundaras don’t lean super hard on either. The bass is absolutely there – and impressively so for open-back headphones – but it isn’t emphasized.

Picking out some specific tracks, I was really thrilled with how the drums sounded on Alice in Chains’ “No Excuses” and Metallica’s “Of Wolf and Man.” The drums that punctuate the opening of each track are crisp and clear on the Sundaras. Listening to Calexico’s “The Ballad of Cable Hogue,” I was impressed with how much each instrument stood out and how the soundstage placed the different instruments around me. The vocals on just about any Thee Michelle Gun Elephant song – but let’s pick on “Revolver Junkies” – often sound clipped and harsh, but the high ends of the harsh vocals and guitar are smoothed out by the Sundaras. Switching to Kyuss’ “Space Cadet,” the bass isn’t quite as heavy as I’m used to, but it’s still satisfying. It leans more neutral, and I tend to like that more even feel even if it doesn’t slam quite as hard. It’s still very much there.

Regardless of what I listened to, everything was exceedingly clear. These are the kind of headphones that will get you to start re-ripping your CD collection in FLAC format because they point out the flaws in your existing rips with great precision. 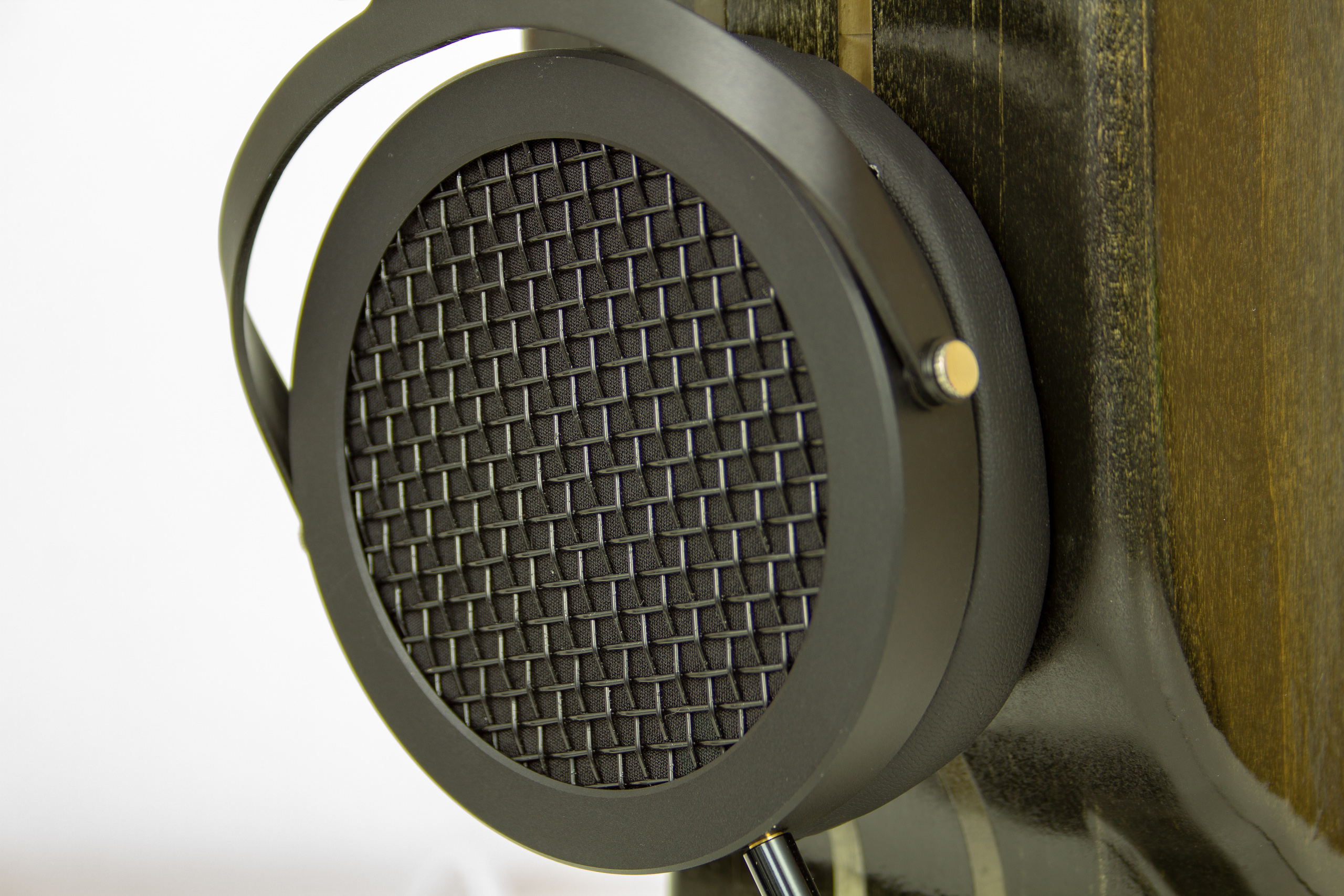 Overall, I really dig the Sundaras. They’re great-looking, comfortable headphones with a neutral, clean, and satisfying sound. I loved wearing them for extended periods and often found myself getting giddy listening to familiar songs. I wish they had a better cord and better jacks on the headphones. I’d love to see the next version – because I think HiFiMan will nail them. Right now, you’ll simply have to settle for “very, very good.”

Disclaimer: We received a loaner unit from the manufacturer and listened to them for 20-plus hours before writing this review.