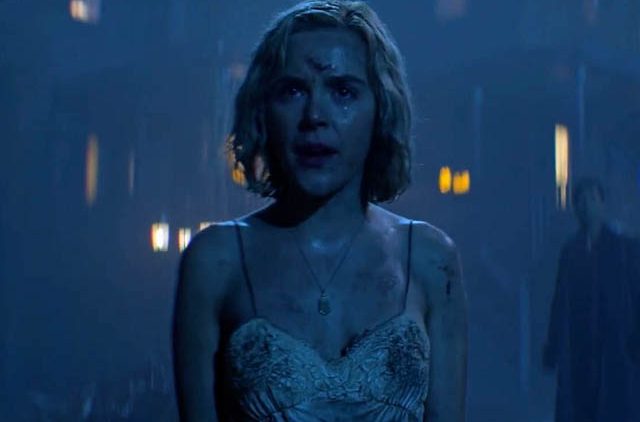 It was hard to know what to expect from Chilling Adventures of Sabrina. Based on the saccharine comic character of Archie Comics lore, and best remembered for the teen comedy on ABC starring Melissa Joan Hart, who knew where this series would go.

And the short answer is: It goes dark. It goes really dark.

The series hasn’t shied away in promotional materials from showing you darker images of hanging women and a goat-headed monster of some form. Well, we’re here to tell you none of that is some nightmare cop out. There are people hanging from trees. There is a goat-headed monster. There is death. There is necromancy. There are inverted crosses. This series doesn’t pull any punches in embracing a darker side of the story.

And yet, it is full of hope and lightness. Sabrina – expertly played by Kiernan Shipka – is a witch/human offspring, and she fully believes that mortals are worth far more than just being blood sacrifices for various incantations. As has been made very clear in the trailers, she rejects signing the Book of the Beast which will give her her full powers because it will mean leaving behind her mortal friends, and, most importantly, her boyfriend Harvey Kinkle (Ross Lynch).

That’s where the season begins, and where it ends is a very different place altogether. No one comes out of this season unscathed. All of them have seen and experienced things that will forever change them. And it’s very clear that season 2 – which is already filming – is going to have a lot of pieces on the board when it picks up.

As much as we enjoyed season 1 of Chilling Adventures of Sabrina, it is not going to be for everyone. Despite a TV-14 rating, this show makes no bones about dealing with the occult, sacrifices, death, murder, and a host of other topics.

It also may not be the most visually pleasing series for some people. The series is shot with what seems to be a single focus lens meaning everything but the primary topic of the shot is in a bit of a fuzzy haze. The edges of the screen constantly look distorted and odd. It completely suits the series and the subject matter, and while we enjoyed it, we could see where it may wear on some people’s nerves.

The series, especially early in the season, seems to be a bit torn to its topic matter. The first few episodes have some very “high school is tough!” storylines running through them while at night Sabrina is going before a tribunal of hell judges for breaking her promise to the Dark Lord. It’s clear that part of this is to show the difference in her the two sides of Sabrina’s life, but it also leaves you with a bit of tonal whiplash at times as a viewer.

Overall, Chilling Adventures of Sabrina is a fun series and we anxiously await its season 2. But to most viewers, we would say try one to two episodes first before committing to all 10. The tone may simply not be for you, but if it is, you’re in for a heck of a good time.