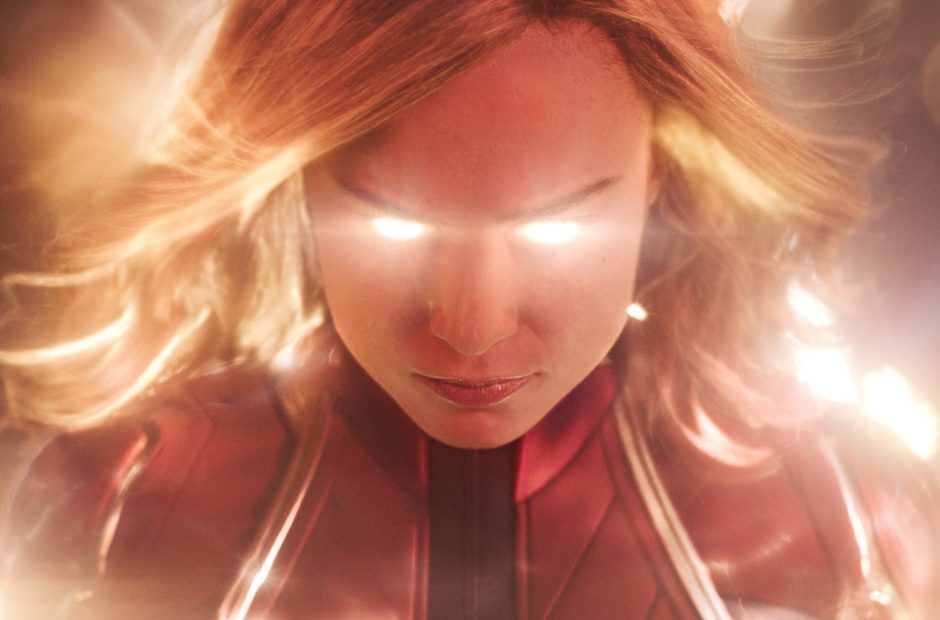 If you’d told me even 5 years ago that Captain Marvel, of all of Marvel’s characters, would be headlining her own movie, there’s no way I would’ve believed you. But the power of the Marvel machine is such that not only is the movie happening, it’s an enjoyable movie worthy of the MCU, despite some frustrating baggage keeping it from being truly great.

While Guardians of the Galaxy were Marvel’s first venture into the “cosmic” side of the Marvel universe, Captain Marvel is the connection that brings earth and the cosmos together. Carol Danvers (Brie Larson), a test pilot on experimental aircraft, finds herself living among the Kree on their homeworld of Hala as a warrior fighting in a war against the shape-shifting Skrulls. Only she doesn’t remember that she’s Carol Danvers from Earth, not the Kree warrior called Vers.

A mission gone sideways lands Danvers right in the middle of a Blockbuster Video in the 1990s, without a way back to Hala. From here her journey begins – one of self-discovery and self-actualization.

Right from the start, Captain Marvel had a lot of work to do. In one movie, we have to get through Danvers’ origins, her time with the Kree, her return to Earth, and her becoming Captain Marvel – as well as formally introducing the Kree and Skrull alien races. That’s a lot to fit into one movie.

All that info-dumping, which is necessary to introduce Danvers herself and quite possibly parts of the next batch of MCU movies, threatens to drag down the movie. We spend a lot of time in flashbacks and explanation before finally getting to the good stuff.

The whole story is built like a mystery not just for us by for Danvers herself. We learn with her who she is, who she was, and what she is. We learn who she’s fighting and why. We learn about her past and her future along with her. It makes the revelations resonate more effectively and the exposition much less tedious than it would be in another movie.

Front and center is her relationship with a younger and relatively inexperienced Nick Fury (Samuel L. Jackson). Putting aside the astoundingly good CG used to enyouthen Fury (and another particular agent of S.H.I.E.L.D.), Danvers’ relationship with Fury is unlike that of Fury and any other character in the MCU. 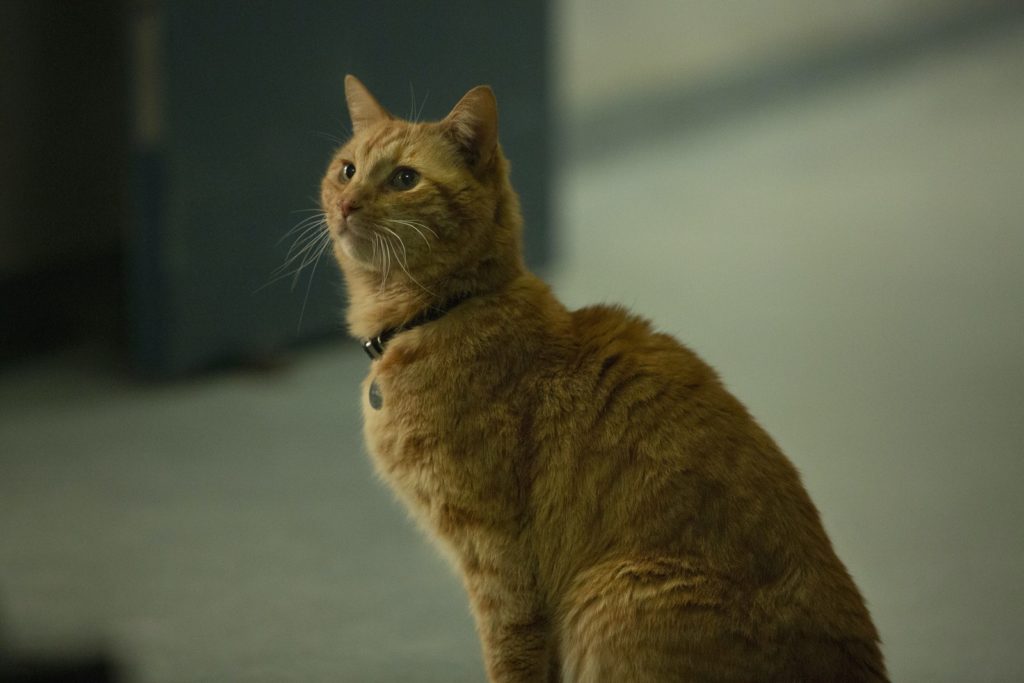 This is definitely Danvers origin story, but it just so happens to be Fury’s, too. In essence, they helped each other become who they are in the modern Marvel world. It’s fun to see Fury off his guard and genuinely challenged by someone, rather than being someone with all the answers and a contingency plan for everything. Larson and Sam Jackson both look like they’re having a lot of fun playing the characters, and the chemistry between the two makes the movie into a buddy-cop type story pretty quickly.

Larson on her own is the other huge grounding element for the movie. She feels absolutely genuine in the role of Carol Danvers. She’s funny and immediately believable. She goes from a trained rookie soldier to a fish out of water and finally to her own person, and is great as all of these. When she’s finally zipping around the sky and whooping and hollering as she fires photon blasts out of her hands, it feels earned.

Perhaps my favorite element of the movie puts us firmly in light spoiler territory. 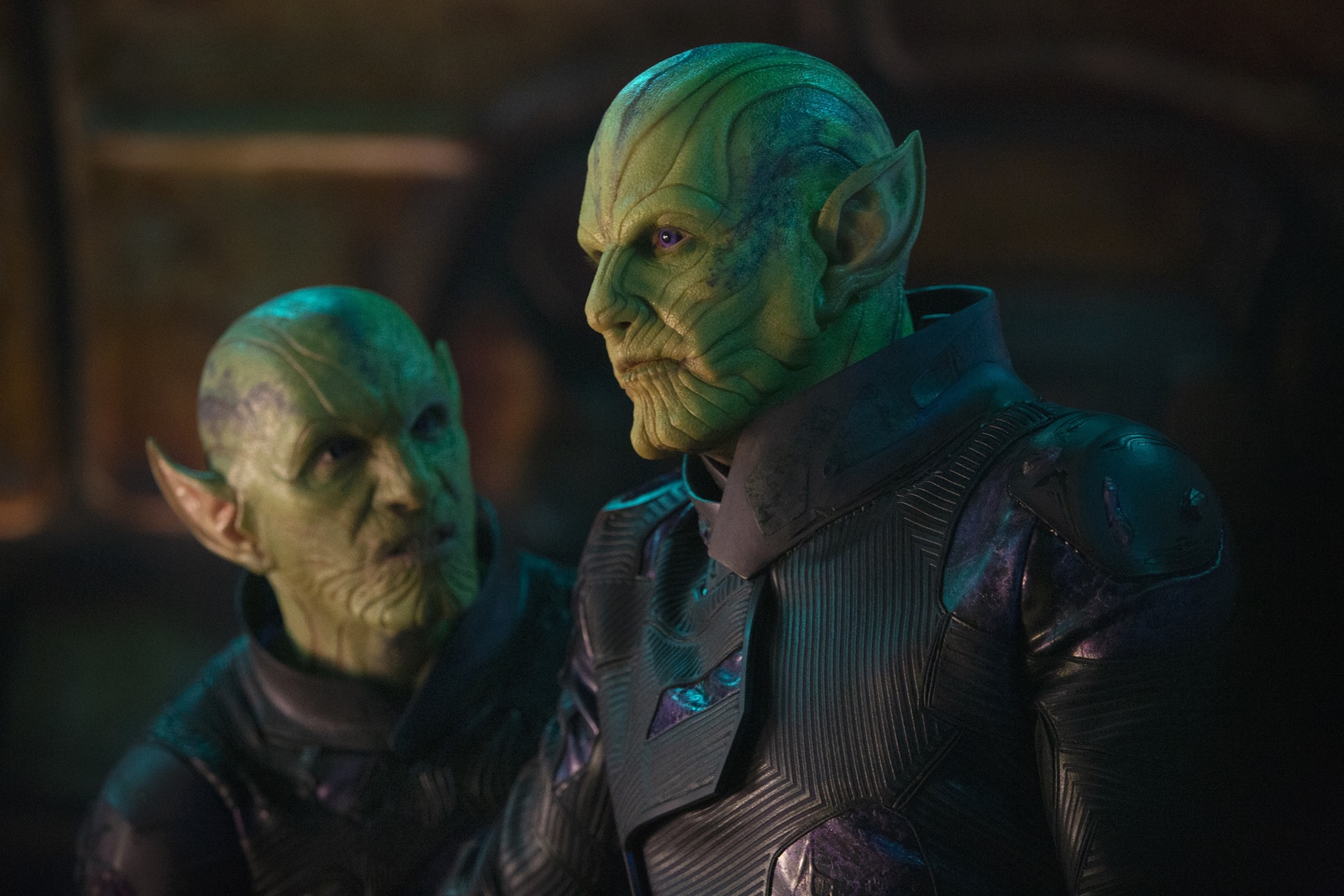 And that’s the way the story handles the Kree and Skrulls. The Kree warriors Danvers begins her tale with are led by Jude Law, while the Skrulls are led by Ben Mendelsohn. Mendelsohn once again plays a villain here as Skrull leader Talos, but he’s a far cry from his villains of Ready Player One and Rogue One. Talos is a complex character whose goals are gut-punchingly sympathetic, once the truth of his mission comes out completely, casting much of the earlier events in a very different light from how they began.

Part of what makes him such a blast is that the movie opted to use traditional prosthetics instead of CGI and Meldelsohn nails Talos. I can’t say whether he had fun wearing a green face for hours at a time, but I can say for sure that he had fun playing Talos and it’s apparent in every scene he’s in, whether as a Skrull or as a shape-shifted human.

Perhaps my biggest complaint about Captain Marvel is the same complaint I had about Aquaman a couple months ago: what’s up with the overbearing music choices?

Captain Marvel is steeped in 90s nostalgia and imagery and I dig that. A lot of setting the stage for that is using music of the time. But along with using diegetic music to place the Captain in the age of Blockbuster and dialup, the movie uses a lot of music from the time as score, putting it behind fights in space. The movie doesn’t spend a lot of time on the fact that Danvers is a woman – though it does acknowledge it and handles the struggles unique to that pretty well – but the soundtrack doesn’t let you forget, with bands like Hole, Garbage, No Doubt, and Elastica in the list. It’s a solid, fun soundtrack, but I found it sometimes overpowering otherwise emotional moments. Mileage on this is going to vary, of course, depending on your connection to the music, and I suspect these moments are going to be fan favorites for many viewers.

Aside from that extremely minor complaint, I had a blast watching Captain Marvel. There are tons of funny moments between Danvers and Fury, with the Skrull characters, and with the movie’s breakout cast member, Goose the Cat. With Fury having been missing from the MCU for so long, it’s fun to see Jackson not just front and center, but playing a different version of the character. This taste of Captain Marvel has me even more excited to see what goes down in Avengers: Endgame this spring, and for an inevitable Captain Marvel sequel – hopefully as a driving force of Marvel’s next phase.