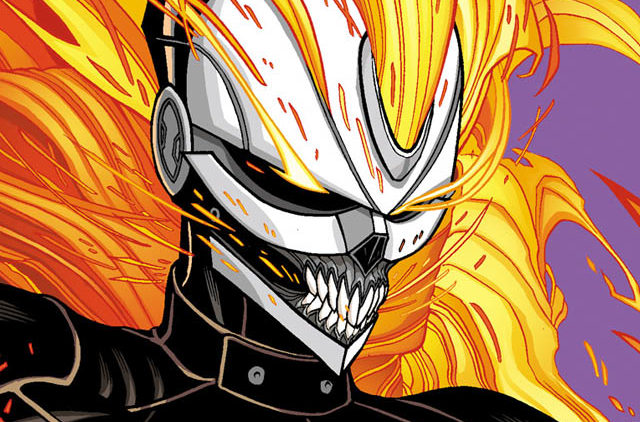 Hulu announced on Wednesday that it will be expanding its association with Marvel with two new live-action series.

The first of two new Marvel series is a live-action Ghost Rider series. The new series will be based on the Robbie Reyes version of the character who has already appeared in live-action on Agents of S.H.I.E.L.D. played by Gabriel Luna. The Hulu description of the series is as follows:

Marvel’s Ghost Rider, also known as Robbie Reyes, is a quintessential antihero, consumed by hellfire and supernaturally bound to a demon. Reyes lives on the Texas/Mexico border and when he unleashes the Rider, Robbie brings vengeance for the innocents he encounters, but struggles to control the power he wields. Marvel’s Ghost Rider is executive produced by Ingrid Escajeda, who will serve as showrunner, Paul Zbyszewski and Marvel’s Jeph Loeb.

Hulu did not say if Luna would be reprising the role, but about 12 hours before Hulu made the announcement, Luna tweeted out, “Chains a’ rattlin’…”.

Then, immediately following the announcement about Hulu, Luna quoted the tweet and included a flaming skull emoji.

This was followed up shortly thereafter by an exclusive report from Variety that Luna would indeed be the main behind the flaming skull once again.

The second series announced by Hulu is Helstrom. The official description of this series is as follows:

Daimon and Ana Helstrom are the son and daughter of a mysterious and powerful serial killer in Marvel’s Helstrom. The siblings have a complicated dynamic as they track down the terrorizing worst of humanity — each with their attitude and skills. Marvel’s Helstrom is executive produced by Paul Zbyszewski, who will serve as showrunner and Marvel’s Jeph Loeb.

This is leading to some confusion as Daimon Helstrom in the comics is also known as the Son of Satan, as in the literal Satan, so we’re not quite sure where this serial killer angle is coming from. Either way, we’re always up for some more Marvel.

The Runaways has already been picked up for a third season bringing the total of live-action Marvel properties on Hulu to three. Additionally, Hulu has five upcoming Marvel animated series,

If this seems like a lot of Marvel for Hulu when Disney is preparing to launch its own Disney+ service, remember that Disney is now the majority owner of Hulu. This came about due to a combination of acquiring 21st Century Fox and buying out the AT&T shares. The only outstanding shares left belong to Comcast and Disney is currently in negotiations to purchase those.

The concept is that Hulu will handle anything Disney deems too adult for Disney+, so think of the darker properties going here.

Both Ghost Rider and Helstrom will debut in 2020.