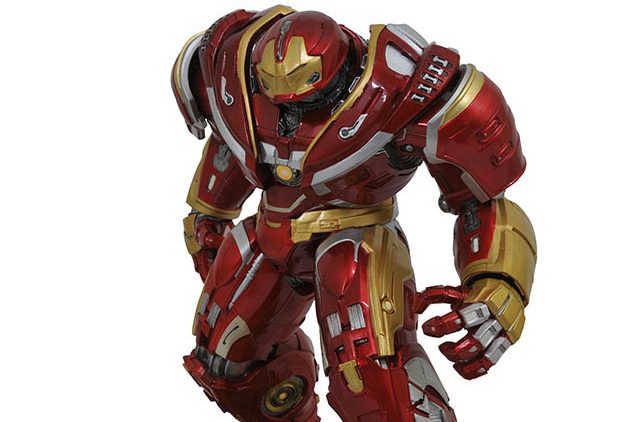 Diamond Select is hitting up New York Comic Con 2018 with a ton of new products for you to take a look at that you can order through your local comic shops or shop.diamondselecttoys.com.

There’s a little bit of everything here, and some of it is just gorgeous. That Hulkbuster is going to cost a pretty penny, but it would look great in anyone’s collection.

Make sure to stop by the Diamond Select booth (booth 1644) during NYCC to check out all of the new items.

This is the big one! The biggest statue ever released by Diamond Select Toys, this nearly 24-inch sculpture of the Hulkbuster MK2 armor from Avengers: Infinity War appropriately dwarfs other statues in the line, making it the centerpiece of any Avengers collection. Limited to only 200 pieces, it is hand-numbered, and comes packaged with a certificate of authenticity in a full-color box. Sculpted by Gentle Giant Studios!

Repulsors to full! This resin statue of Iron Man in his MK50 armor shows him landing on a pile of rubble even as he unleashes a blistering barrage at his target. This statue is limited to a production run of 3,000 pieces, and each statue is hand-numbered, with an accompanying certificate of authenticity in a full-color, hand-numbered box. Designed by Joe Allard and sculpted by Gentle Giant Studios!

Don’t let her cross your path! Or do! Since it’s not your safe she’s cracking in to, you won’t mind seeing this sculpture of the Marvel Universe’s resident cat burglar crouching on your shelf. Caught in the light of the Spider-signal, Spider-Man’s frenemy the Black Cat wears her classic costume, and is cleaning out a safe of cash and gold. This 9-inch-scale PVC Diorama is made of high-grade plastic with detailed paint applications and was designed by Caesar and sculpted by Alejandro Pereira. Packaged in a full-color window box.

Wish you could be hobnobbin’ with the Hobgoblin? Well, now you can, with this 12″ scale resin statue of one of Spider-Man’s greatest foes! Whether you’re a fan of the Ned Leeds, Jason Macendale or Roderick Kingsley versions of the character, this is the ultimate Hobgoblin collectible! Limited to only 3,000 pieces, it was sculpted by Jean St. Jean from a design by Joe Allard, and comes packaged with a certificate of authenticity in a numbered, full-color box.

Thanos triumphant! The mad titan has collected all of the Infinity Gems, and raises his gauntlet in victory in this new statue in the Marvel Milestones line! In scale to other Milestones pieces, this 20″ sculpture can display with the Infinity War Thor statue or on his own, and is limited to a numbered edition of only 1,000. Snap him up before he snaps his fingers! Packaged with a certificate of authenticity in a full-color box. Designed by Joe Allard and sculpted by Jorge Santos Souza!

How spectacular is your Gallery? Spider-Man returns with an all-new sculpt in the Marvel Gallery PVC diorama line! Crouched on a web slung across an alleyway, Spider-Man lives up to his namesake in this all-new PVC sculpture portraying the hero in his element. Measuring approximately 7″ high by 11 ” wide, this detailed sculpt by Alterton is based on a design by Caesar, and comes packaged in a full-color window box. 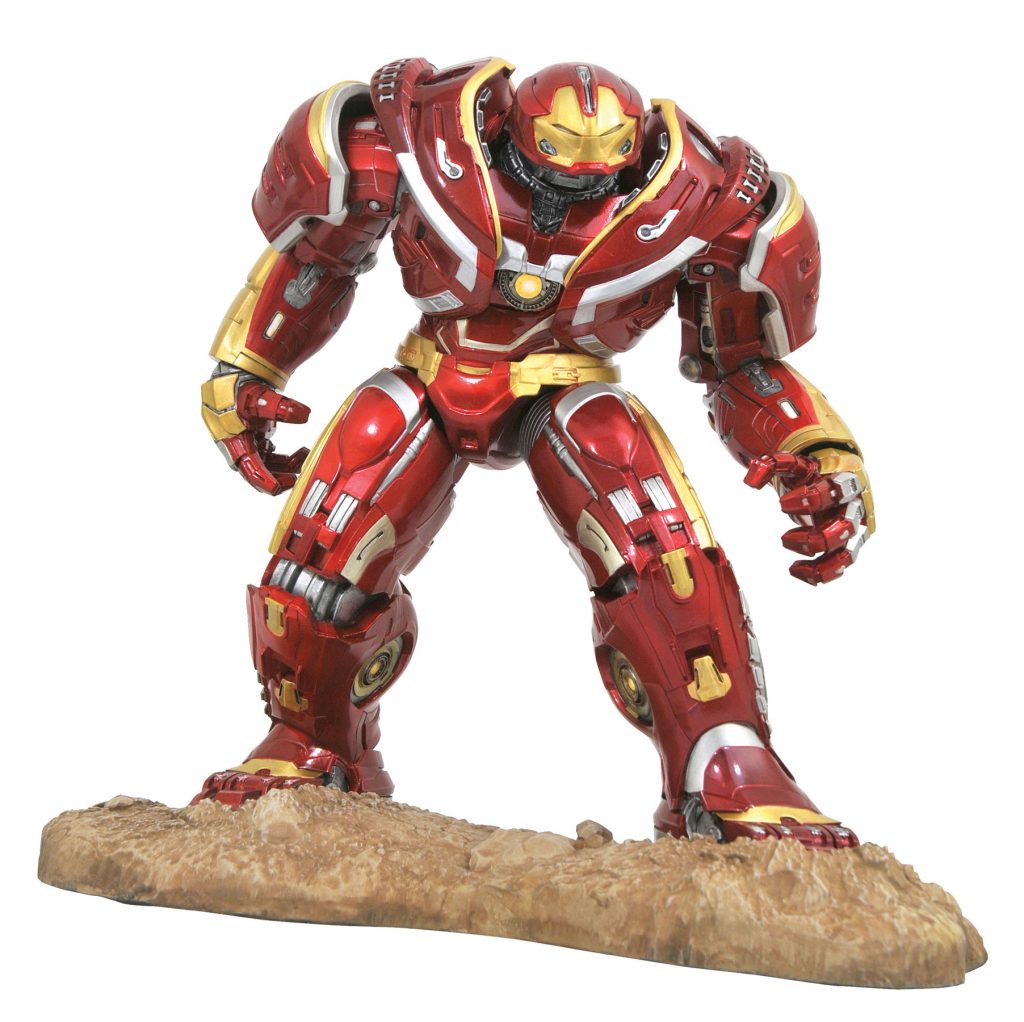 He’s the hero Gotham deserves, and now he’s the latest PVC Diorama in the DC Movie Gallery line! Based on Christopher Nolan’s movie The Dark Knight, this sculpture of Batman shows him examining a playing card amid the rubble of one of the Joker’s escapades. Measuring approximately 9 inches tall, this movie-accurate diorama comes packaged in a full-color window box. Designed by Shawn Knapp, and sculpted by Rocco Tartamella!

Speak of the devil, and he shall appear! The conqueror of Gotham City stands triumphant in this new PVC diorama based on the Dark Knight Rises! Depicting Bane standing on the roof of his camouflage tumbler vehicle, this sculpture by Rocco Tartamella was based on a design by Shawn Knapp. The diorama stands approximately 11 inches tall, is made of high-grade plastic, features detailed paint applications, and comes packaged in a full-color window box.

How deadly is your Gallery? The DC Gallery line of PVC dioramas accelerates with another addition to the Dark Nights: Metal series of sculptures – Red Death! With bat-shaped speed lightning whipping around him as he screeches to a halt, this Speed Force-empowered Batman is the perfect addition to any Batman or Flash collection! The 10-inch diorama features detailed paint applications and comes packaged in a full-color window box. Designed by Caesar and sculpted by Alterton!

How metal is your Gallery? The world of Dark Knights: Metal expands with the latest comic-based DC Gallery diorama – Wonder Woman from the world of Batman: The Merciless! This woman warrior is girded for battle with breastplate and shoulder armor, and has her sword and shield at the ready. Sprinting past a monstrous tentacle, this action-packed 9-inch PVC diorama comes packaged in a full-color window box. Sculpted by Cortes Studio based on a design by Caesar!

How super is your Gallery? The Girl of Steel breaks into the DC Gallery line of PVC dioramas with this dynamic new sculpture of Kara Zor-El! Shattering a set of chains, Supergirl flies out of an explosion and onto your shelf in a 10-inch diorama by James Marsano based on a design by Caesar. This sculpture features detailed paint applications and comes packaged in a full-color window box.

The DC Universe expands with even more Vinimates vinyl figures set in the world of DC Comics! The Flash, Green Arrow and Supergirl are the latest characters to get the 4-inch block-figure treatment, and each appears in their most famous comic-book look. Set in poses straight off the pages of their titles, each comes packaged in a full-color window box and is in scale with other Vinimates vinyl figures. Designed by Barry Bradfield! 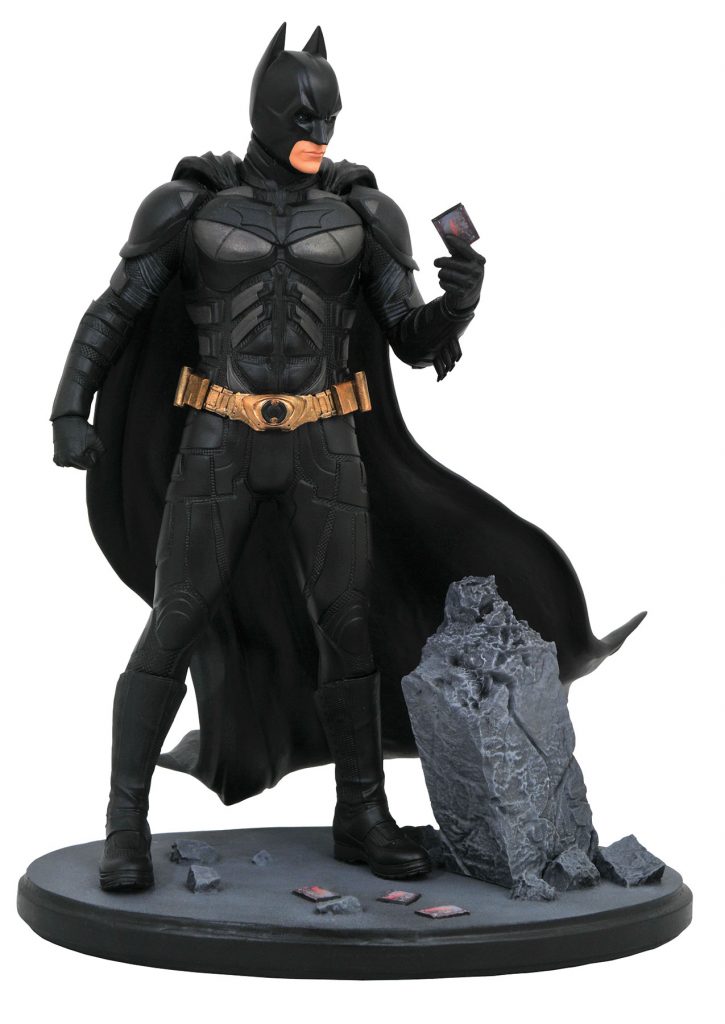 How titanic is your Gallery? The world of Pacific Rim Uprising just got even bigger, with the first ever Gallery PVC Diorama from the hit sequel! Gipsy Avenger stands on guard against Kaiju (and rogue Jaegers) above a diorama of decimated buildings in this 10-inch sculpture, cast in high-grade plastic and featuring detailed paint applications. Packaged in a full-color window box, it was designed and sculpted by BigShot ToyWorks.

The largest-scale Iron Giant collectible ever made is the newest Legend in Three Dimensions! The Legends in 3D line expands to the world of animation with this 10-inch bust of the Iron Giant, star of the animated film of the same name. With his pal Hogarth perched on his shoulder, this bust is the ultimate gift for any fan of The Iron Giant, or of iron giants in general. Limited to an edition of 1,000 pieces, this numbered bust comes with a certificate of authenticity in a full-color box. Designed by Joe Allard!

When you have to kill the boogeyman, you buy a John Wick action figure! This 7-inch Select-scale action figure captures modern action icon Wick as he appears in his first film outing, dressed in a suit and with multiple weapon accessories as well as his faithful dog, whose death spurs the action of the movie. In scale to all other Select action figures, and featuring over 20 points of articulation, this figure comes packaged in display-ready Select action figure packaging with side-panel artwork for shelf reference. Designed by Yuri Tming and sculpted by Gentle Giant Studios

Revenge is a dish best served vinyl! The Vinimates vinyl figure line has captured some of the biggest icons of action movies, and now one of the newest icons joins the lineup! Vengeful assassin John Wick and his former employer Viggo Tarasov are the latest additions, with John striking a walking pose in his first-movie duds armed with a pistol, and Viggo holding a switchblade. Each 4-inch figure has a fully articulated neck for additional posing options and comes packaged in a full-color window box. Designed by Barry Bradfield!

Another Legend is in the making! One of the Muppet Show’s most iconic Muppets, Electric Mayhem drummer Animal, is the first felt fellow to be made into a half-scale bust in the Legends in 3D line! Standing approximately 10 inches tall, this resin bust of Animal was sculpted by Rocco Tartamella from a design by Joe Allard. Limited to only 1,000 pieces, each bust comes packaged with a numbered certificate of authenticity in a full-color, hand-numbered box.

What did you do, Ray? The newest wave of Ghostbusters action figures continues to build the world of the Real Ghostbusters – and the firehouse diorama – with three new figures of Peter, Ray and the Stay-Puft Marshmallow Man! Based on their animated appearances with new jumpsuits, new head sculpts and new gear, Peter and Ray measure approximately 7 inches tall while the first-ever fully articulated Mr. Stay-Puft measures approximately 8 inches tall! Plus, these three figures complete the firehouse diorama started in Series 6, so pick them up and complete the iconic front doors! Each comes packaged in the now-iconic, display-ready Select action figure packaging with side-panel artwork for shelf reference. Designed by Yuri Tming and sculpted by Gentle Giant Studios!

Resistance is futile! No Star Trek fan can pass up the opportunity to own the ultimate Borg action figure! This 7-inch, fully poseable action figure is based on the Borg’s appearance in Star Trek: The Next Generation, and includes multiple interchangeable parts, including human and Klingon heads, various eyepieces, different tool arms and a removable vest. You can create dozens of different configurations and build an army of Borg! With a full 16 points of articulation, this figure comes packaged in display-ready Select figure packaging with side-panel artwork. Sculpted by Patrick Piggott! 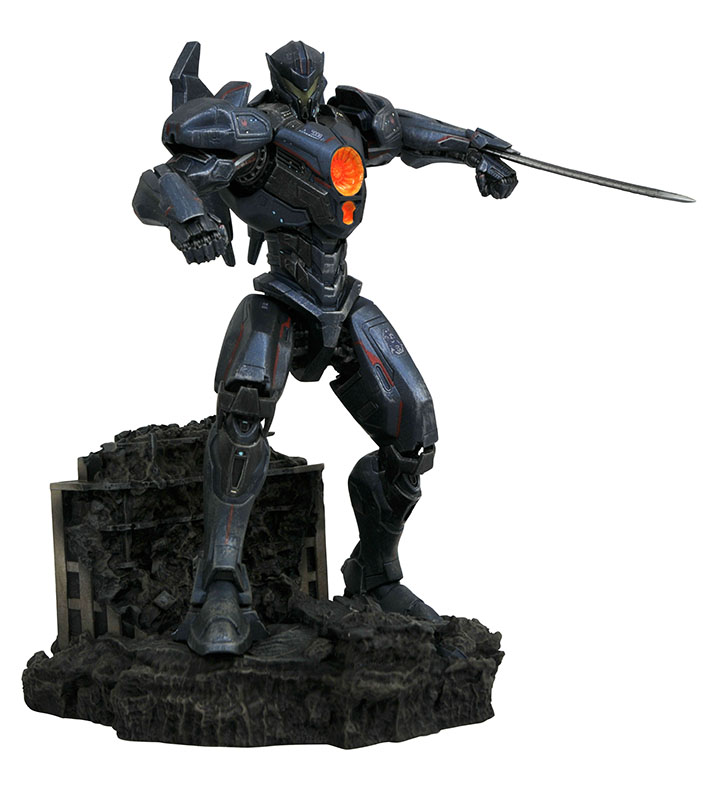