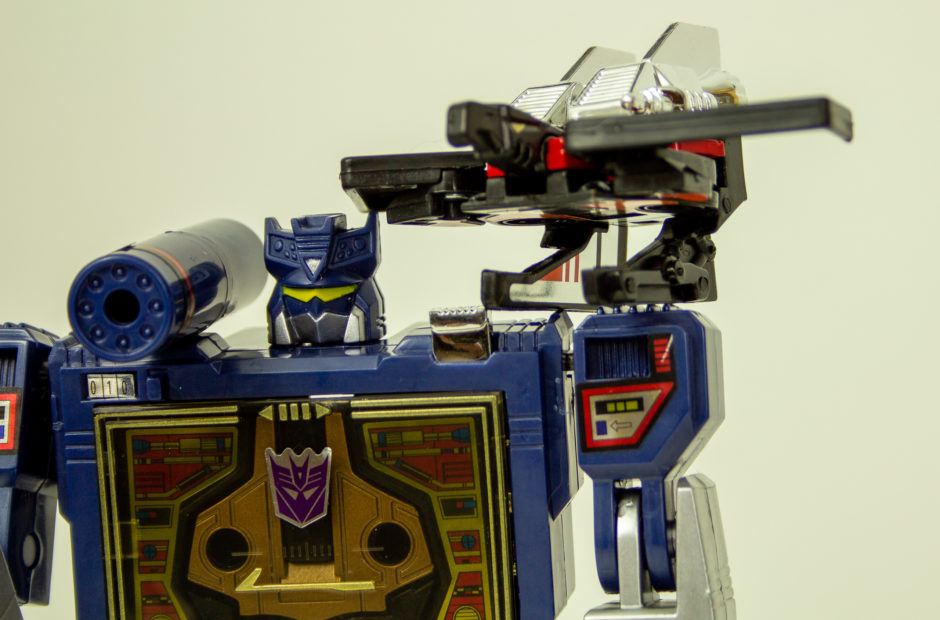 When Walmart announced the return of Generation 1 Transformers toys last summer, it was a topic of much chatter in TheNerdy’s editorial Slack. We all have our favorite Transformers. For me, the big moment came this summer, a year later, with the release of the G1 Soundwave toy. Soundwave has been my favorite Transformer for years and years, and also the one toy I could never get ahold of as a kid.

And now, I have Soundwave. The coolest (and yes, maybe the silliest) Transformer is in my office and on my shelf. And it’s just about perfect. 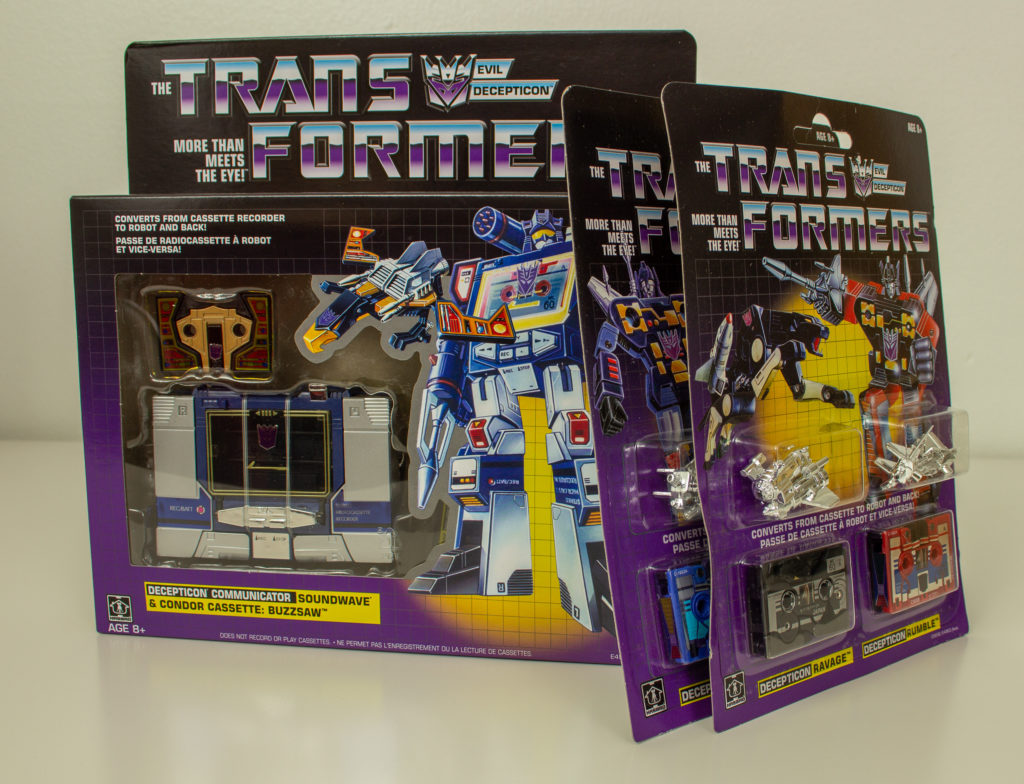 All in all, we picked up 3 packages totalling right around $100. The Soundwave Transformer itself, who comes packaged with the Buzzsaw cassette tape, is in the biggest box. Along with those, we picked up the two cassette two-packs: Laserbeak & Frenzy, and Rumble & Ravage. Soundwave cost about $60 at retail, while each of the two-packs retailed for $20. They’re quickly becoming hard to find, though, and they’re Walmart-exclusive releases, so you might have to pay quite a bit more. In other words, I was lucky.

I don’t have very many criticisms for this toy. The biggest one is that Soundwave comes with Buzzsaw instead of Laserbeak. Laserbeak is the quintessential Soundwave minion. The thing is: it’s a matter of authenticity. The original release was accompanied by Buzzsaw, as well, so the most I can do is offer a shrug. Ravage and Laserbeak are the two cassettes I wanted most, so I’m stuck picking up all three packages. 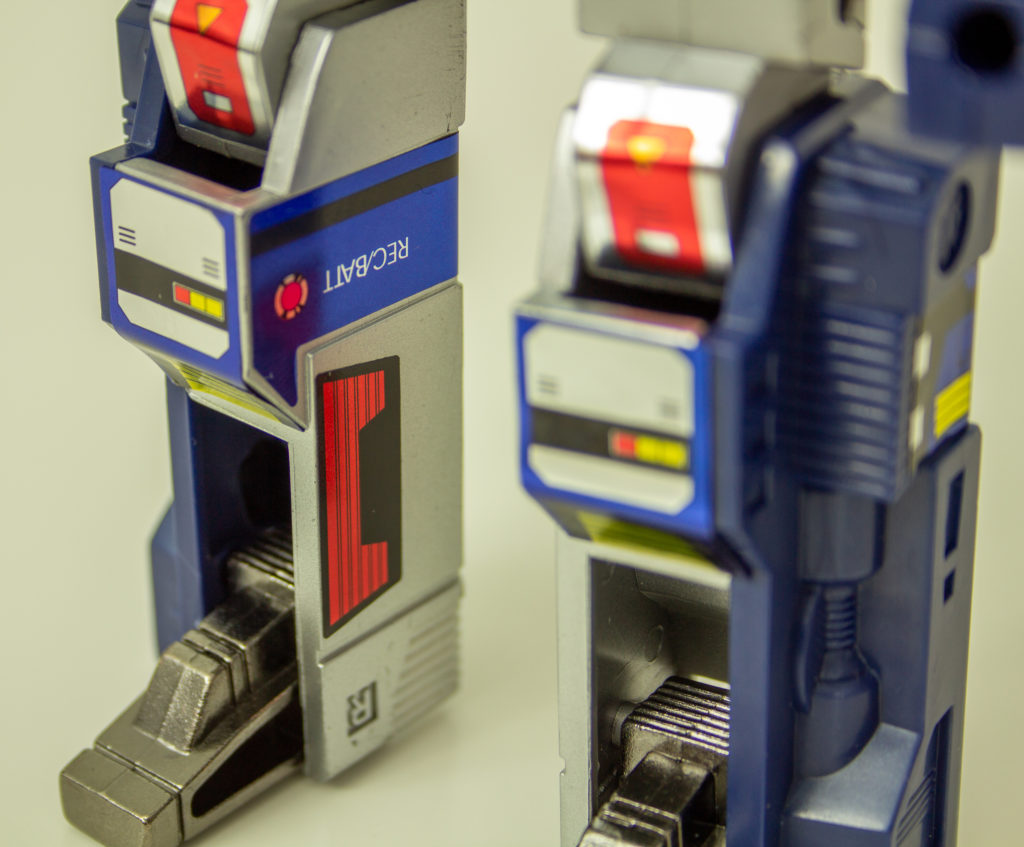 Let’s dive in and talk about Soundwave. The toy looks great. I couldn’t do a side-by-side with the original Soundwave, but it feels very authentic from top to bottom. Looking at the packaging, the differences are minor. Copyright stuff is different, of course, but the only thing that stands out is that the original packaging used styrofoam to cushion my beloved tape robot. Here, we have the standard plastic suspension packaging with rubber restraints. The box includes Soundwave’s gun, shoulder cannon, and a sheet of sticker decals to apply alongside the already-applied decals.

As for the toy itself, it’s a collection of blue and silver plastic and gunmetal diecast steel. The steel is a minority of the material, but the cold feel of the metal gives the toy a nice, premium feel. All the original details are present; the cassette deck flips out with the press of a spring-load button. The heavy steel feet flip out and help ground the toy, while the hands slide out with fairly smooth switches. Even the belt clip is on the back. 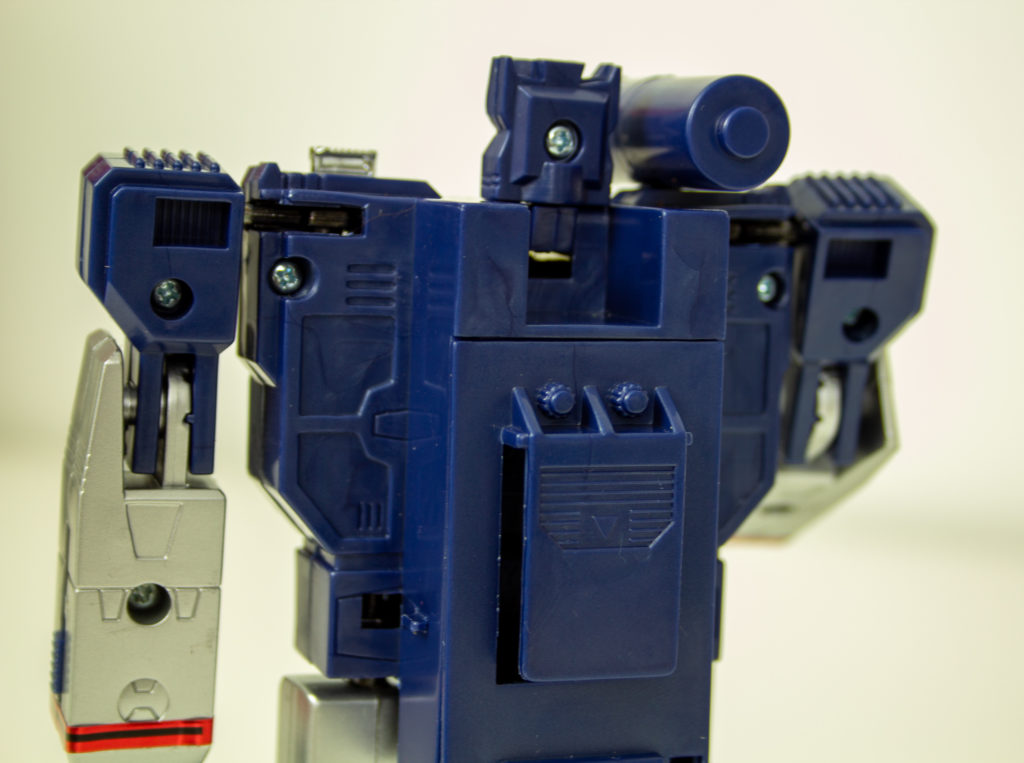 Transforming the toy is a great reminder of just how ingenious these toys are. Soundwave is a joy to transform from deck to robot and back, and everything moves as I expected. Transforming the toy is inuititive. I watched the Netflix Toys That Made Us documentary episode about the toys, which filled in a ton of details I didn’t know even as a longtime Transformers fan. The documentary detailed just how much care the designers put into making the Transformers, and it shows when handling even these re-issued toys. 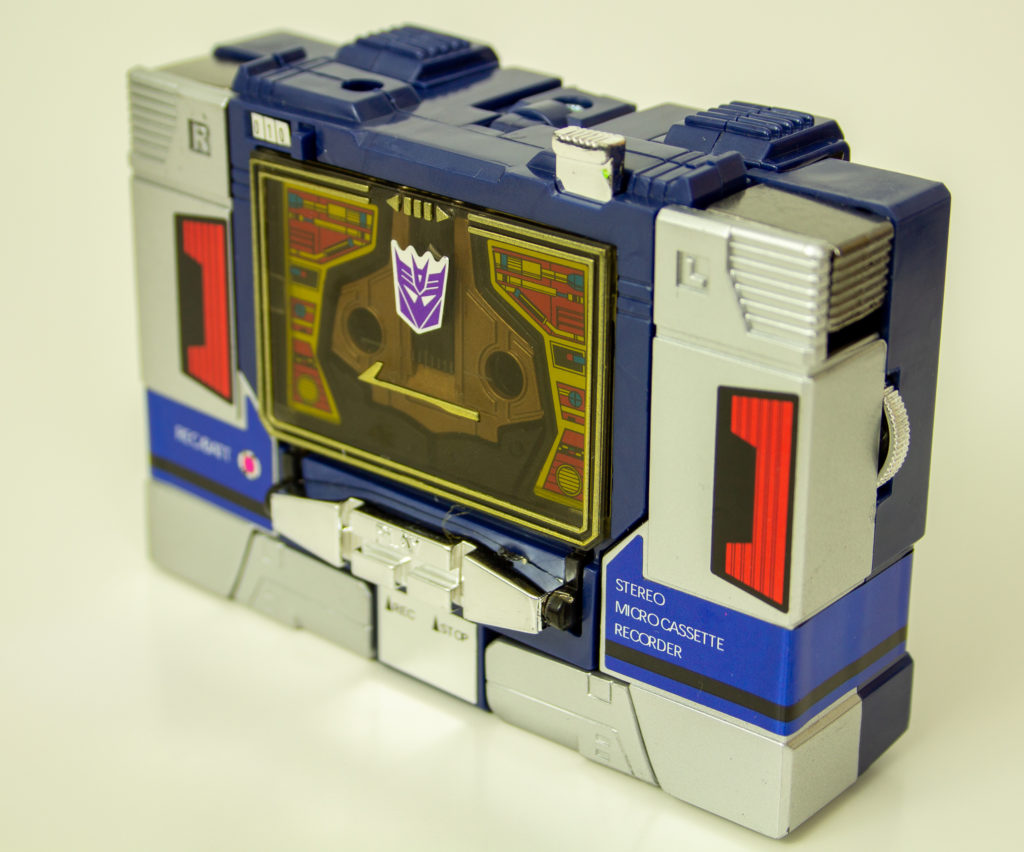 Not only is Soundwave a blast to manipulate, the toy stands up easily. The cabinet it sits in is the tiniest bit unsteady, and one of the very few Funko toys I own is constantly toppling over. Soundwave is rock steady. (But not Rocksteady, that’s a different toy).

Even the cassette tapes themselves are awesome. Rumble and Frenzy have enough detail to them to separate them from the similarly-sized GoBots toys that were also on shelves back then, while Laserbeak and Buzzsaw are great-looking little bird bots that seem to take shape almost magically. Ravage, the panther bot, feels the most two-dimensional. The toy’s flat head stands out as looking especially weird. Despite that, even Ravage still looks great. 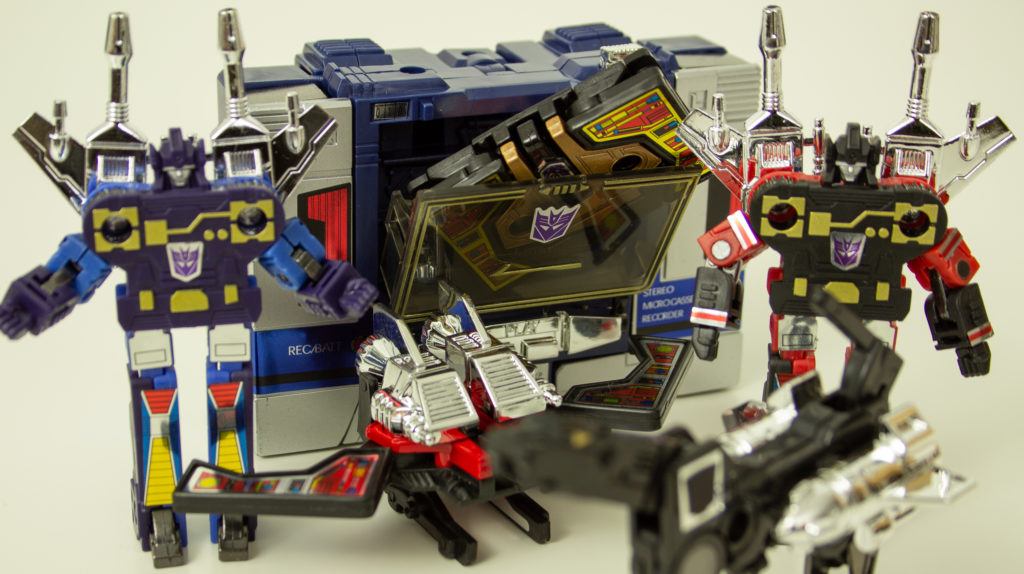 The biggest question is the price. $100 is a lot to spend on a Transformer that fits in my pocket. I can’t see myself doing this for almost any other Transformer; even ones like Hot Rod and Optimus Prime just aren’t as appealing to me. Soundwave is a symbol of the times, both as a Transformer and a cultural signifier of all the retrosynth music that remembers the 80s through a nostalgic lens. Soundwave is the first robot voice I can remember hearing. Even as a character, I have great affection for him as the right-hand man that patiently waits to take quick, decisive action. Starscream makes a lot of noise, but Soundwave is the one to truly fear.

For me, Soundwave is definitely worth the $100 I paid to get the deck and all four bonus cassette Transformers. I’m thrilled to finally add the original, even as a re-issue, to my collection.