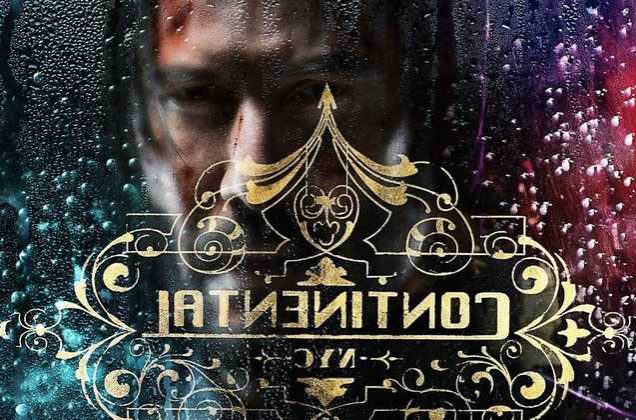 As a boxer makes his way through the ten-plus rounds of a match, there are different stories being told. To the boxer, the fight is a fight for his life, and each punch matters for his survival. To an experienced viewer, each exchange is part of an exciting ballet. To someone outside, it’s an endless flurry of increasingly-bloody punches and meaningless brutality. So then as I watched John Wick fight for his life, three rounds into his bloody match, the question I asked myself was: is this still that deadly ballet, or is it just the dull hum of violence impacting flesh ad infinitum?

Coming out of John Wick: Chapter 3 – Parabellum, I can’t help but think that Wick (and Reeves, of course) is just getting started. Reeves and director Chad Stahleski deliver what we expect in the right way, play with those expectations a little, and engage with the enchanting fiction of the Wickiverse to make sure we know that even a legendary assassin is never truly safe.

Wick 3 picks up where Wick 2 left off. In fact, mere minutes have passed since the ending of the 2017 movie. Having shot and killed a member of the powerful “High Table,” Wick has been given a short window of time in which to prepare or disappear before every assassin in New York City comes gunning for him. There are a lot of them, apparently, which really changes the tone of my recent visit to the city – and they’re all after him thanks to the multi-million dollar bounty on his head. And so John is off and running.

There are three important parts to the John Wick movies. Keanu Reeves’ always-outnumbered-never-outgunned portrayal of John Wick himself is absolutely key to these movies working. Equally important, though, is the world in which Wick lives, the world of assassins that hides just out of sight of our own. The movie wouldn’t work without Reeves hard-driving, often purely physical performance, but without also the cast of perfectly-realized characters he interacts with, it would be just another action movie. Finally, there’s the action that connects Reeves’ performance with the fiction the movie doles out so carefully.

With a F***ing Pencil 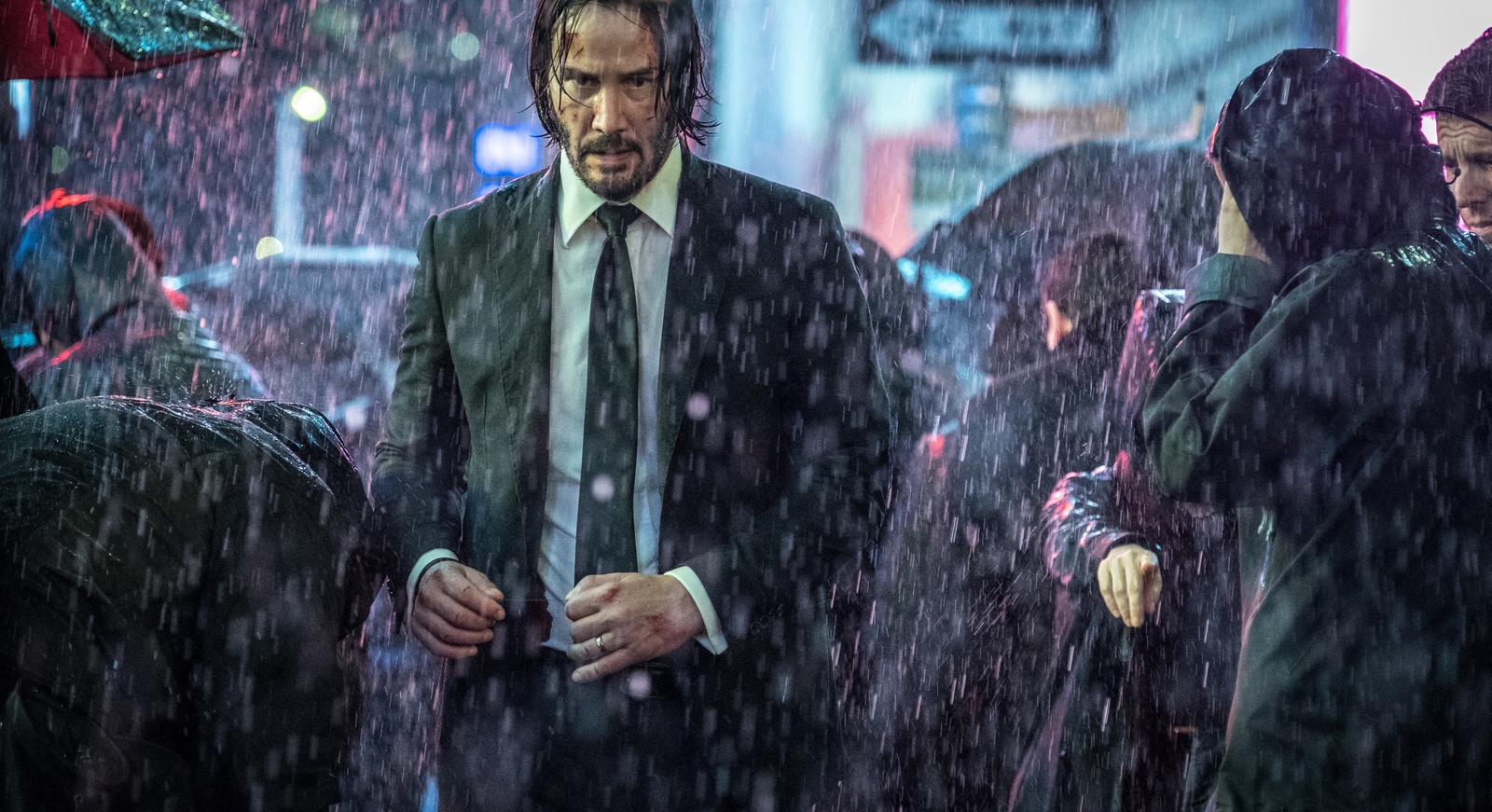 Reeves continues to be magnetic as Wick, and brings the character to life in two vital ways. One, Wick is about action, not words. It’s not just that Reeves does all his own action scenes, which is always a great thing to watch in these CGI-assisted times, but that his action embodies his persona (Note: Keanu does his own action, but not his own stunts; if he’s dishing it out, it’s him. If he’s taking it, it’s the stunt team). When he walks into a room, anything and everything is a weapon if Wick wants it to be in a way only Jason Statham and Jackie Chan can really speak to. But where Chan plays for laughs and Statham’s characters are often showy, Wick’s movements are always the shortest line between two points. He’s ruthlessly efficient, and we see over and over how much work Reeves puts into playing out these scenes. He can go minutes without talking and still be absolutely compelling to watch.

The other thing Reeves brings to the role is a real sense that Wick is hanging by a gossamer thread that could snap at any moment. Reeves lumbers through the alleyways of Chinatown with all the grace of a bear, saving precision for the moments that demand it. I believe this guy is beyond exhausted with every move he makes.

Atop all that is Wick’s aura as a character, emanating out and pulling in the rest of the cast. , This is where the Wick’s world and Wick’s history start to bleed together. The first Wick movie felt like book 10 of a series that we’ve all conveniently forgotten about, and this film continues that flavor. We meet all these characters that know Wick from personal experience or through reputation, and the movie leverages that to make us feel the size of his universe.

In one sequence, the movie expands on both the history of Wick himself and that of his world by introducing us to the Belarusian woman who, it seems, trained him to be the legendary danger he is today. We find her, played by Anjelica Huston, in an opulent but decaying ballet house that exists in the New York of our minds but would’ve certainly been bulldozed or repurposed by the truly unstoppable force of gentrification. She watches ballerinas, criticizing them harshly for minor errors, when Wick comes to her for help. She both seems to resent Wick and feel compelled to lend him her ear, and as they talk, they walk through the greater ballet house, and we see more directly how the house itself likely shaped Wick.

In another, we see how Wick’s reputation has blown out of proportion and become something of a joke. Actor Mark Dacascos, best known by many as the The Chairman on Iron Chef America, is the leader of a gang of ninja assassins. He’s grimly serious, but when the two meet face to face, it becomes apparent quickly that Wick isn’t just another coworker to him – he’s almost a fiction character come to life. An idol of worship given form. The movie plays this for laughs, and the jokes land because we’ve been told over and over what an indomitable force Wick is. The movie knows it’s time to mess with that a little bit. 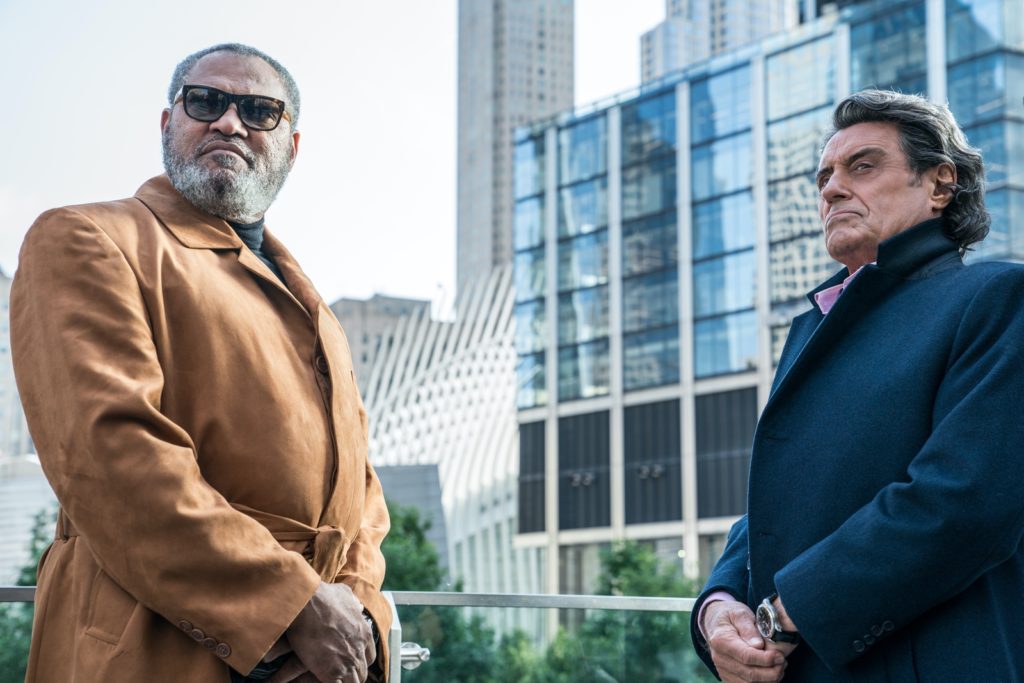 The New York of the Collective Consciousness

Underpinning everything that happens in John Wick is the fictional world of assassins. It gives the world a believable shape that lets it sit between fantasy and reality, making sense, feeling welcoming, and yet being this alien space that we all know we wouldn’t last an hour in.

So far, this world has spun not around Wick himself, but around the Contintental, a hotel in New York City’s financial district where assassins like Wick can find temporary safe haven. The movies feed us just enough information about the Contintental the secret world it represents for us to survive, but never overstuffs us. And at the center of the hotel is Winston, played by Ian McShane, who exists to be the devil and angel on Wick’s shoulders, reminding him of the danger he is getting himself into.

With Wick 3, though, the stakes change as those who helped Wick come under fire for doing so. The High Table whispered about in the previous movies becomes a very real danger to Wick and his friends. By the end of the movie, the Continental is dismantled and is a safe haven no more, and the newly-announced John Wick: Chapter 4 suddenly has a very interesting goal ahead of it of working with the “expert insider” world of the Continental… from the outside. 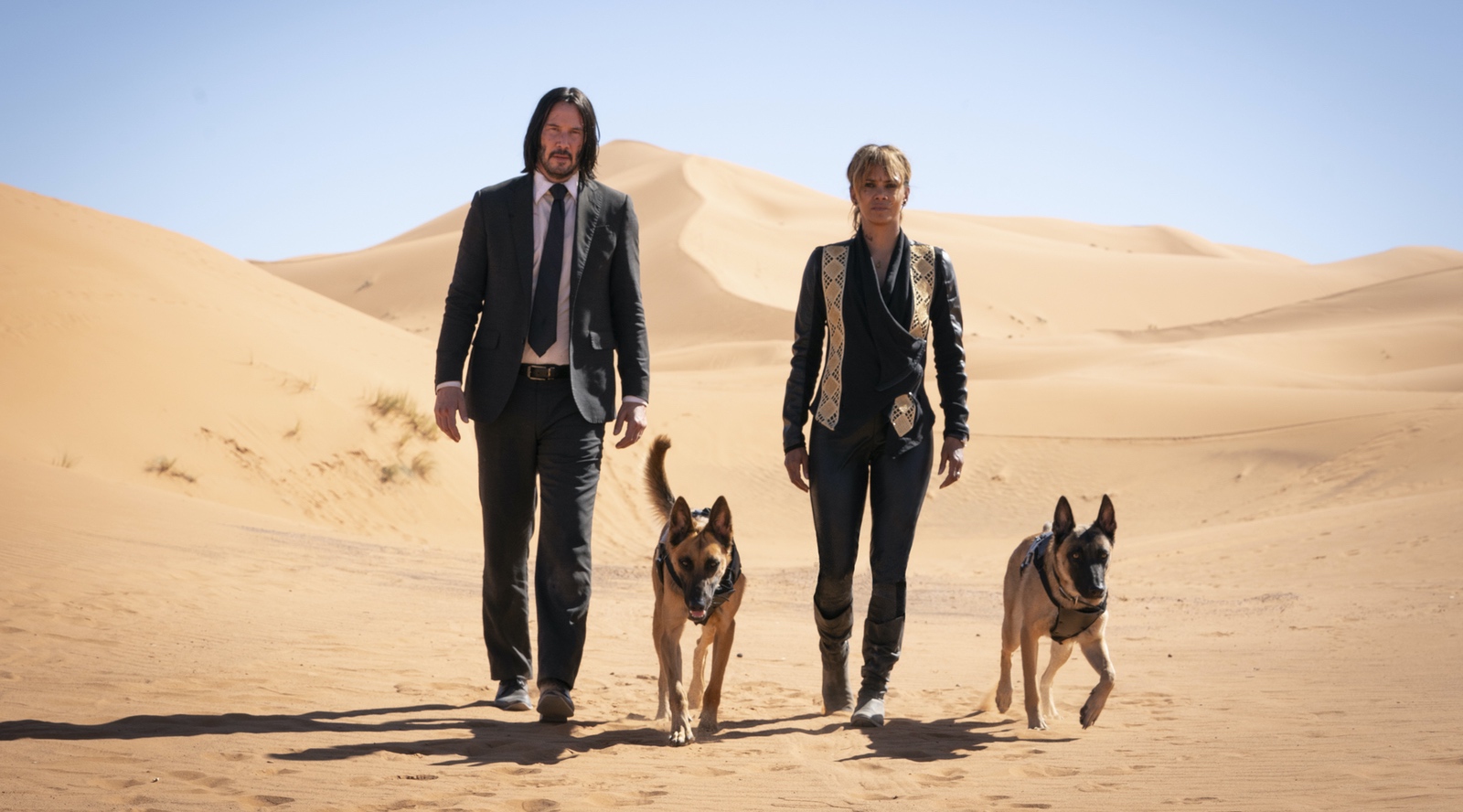 Of course, it’s impossible to talk about a John Wick movie without talking about the action. Wick 3 is relentlessly action-packed. Wick is on the run for almost the whole movie, being pushed further and further into a corner (which is, arguably, the worst thing you can do to Wick if you want to come out breathing at the end). Settings for the action go anywhere from Chinatown to the New York Library to Morocco.

Standing out, in particular, are the scenes featuring Wick teaming up with Halle Berry’s character, Sofia, with her attack dogs. The dogs are a blast on-screen, and are so fierce that they almost feel like CGI at times as they flash across the screen. They steal the extended shootout that has Wick and Sofia downing a horde of assassins after their leader makes the mistake of hurting one of her dogs. It’s not only a great action scene, but a fun callback to the tragic beginning of the first John Wick – this time with some catharsis for the dogs.

And while a lot of the movie’s action is dead serious, some of it is played for judicious laughs. Every scene with Mark Dacascos is, once again, hilarious. But another scene earlier on has Wick stumbling into a sort of weapons museum – exactly the kind of place Wick would end up, of course – and getting into a fight with a trio of men. During the fight, Wick ends up pushed through a display of knives and ends up turning the display on his pursuer. By the time the fifth knife or so sunk into the man, I was laughing aloud, and I’m pretty sure this was intentional. Part of why John Wick is cool is because of this: it knows when, and how, to take the piss out of itself just a bit. 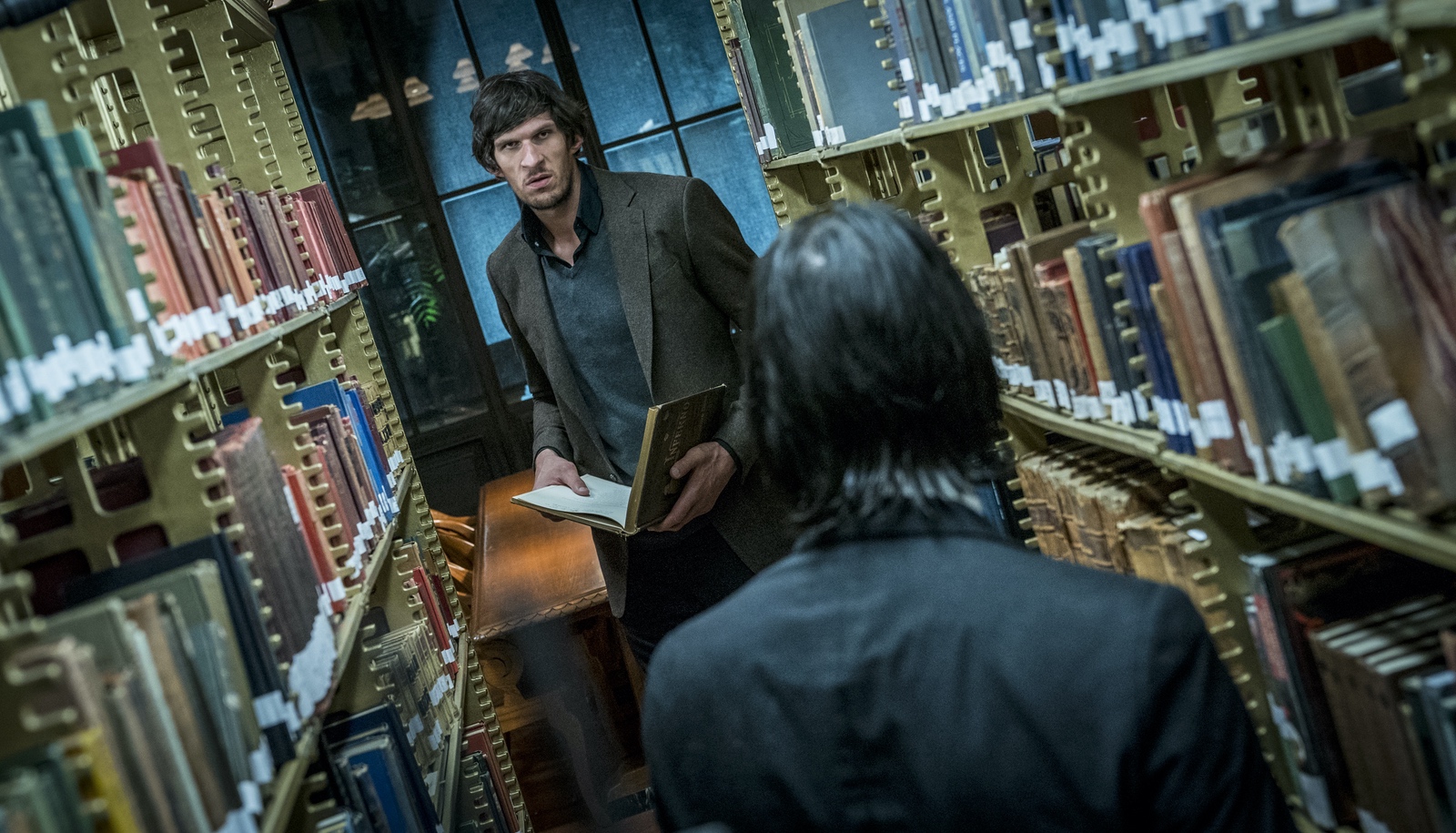 John Wick: Chapter 3 strives to do what many series end up failing at. The core of what makes John Wick so much fun is still there, but enough changes around Keanu’s awesome, close-up performance to keep his work feeling fresh and like something greater than a simple string of action sequences. The world of John Wick is thrumming with life, and all of it wants to kill him. John Wick is exhausted, but he still has more fight left in him.haha