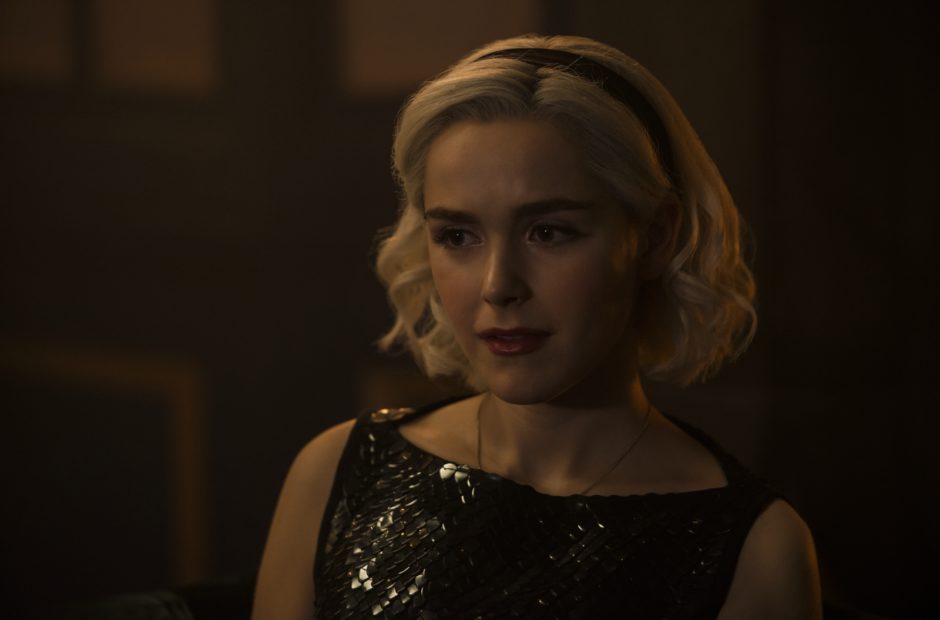 Chilling Adventures of Sabrina part 2 is here, and the witchy world is in turmoil, and so is the show to an extent.

We enjoyed the first half of the first season of Chilling Adventures of Sabrina, and we were super ready for part 2, but it seems the show didn’t know what to do with certain characters. As part 1 explored both the mortal and witch sides of Sabrina, it allowed her to have two distinct sets of friends and she could bounce between the worlds without issue.

From the outset of part 2, Sabrina (Kiernan Shipka) has chosen to spend more time at The Academy of Unseen Arts and only occasionally decide to drop in at Baxter High. This means that her mortal friends – Harvey (Ross Lynch), Roz (Jaz Sinclair), and Susie/Theo (Lachlan Watson) – get pushed very much to the side. While none of these characters are bad, or have stories not worth telling, anytime you see them without Sabrina it feels like wasted time. There is a lot happening in the witch world and you wonder why you’re following any story that doesn’t involve it.

This isn’t to say that a show must involve the main character in every scene. There are many shows that have gotten audiences successfully invested in the side characters, but tat usually needs to be earned with time, and right now it just feels much too soon for this series to be separating the two sides of Sabrina this rapidly.

And then, very early on in the episodes, seeing as Harvey and Sabrina broke up, it’s time for a new relationship to bloom, and Roz enters the picture. As we watch romance bloom between Sabrina’s ex-boyfriend and her best friend you start to think, “Oh, there could be lots of fun conflict here, that must be what they’re building towards.”

Nope. Sabrina says she’s fine with it and the world moves on.

What could have been one of the best storylines of the mortal side of things just gets completely laid to the side and nothing major ever comes out of it. And the end of the season makes it pretty clear that Sabrina has truly moved on from Harvey.

This isn’t to say that the mortals don’t play any important roles in Part 2, but it is clear they were completely unnecessary for about half the episodes. 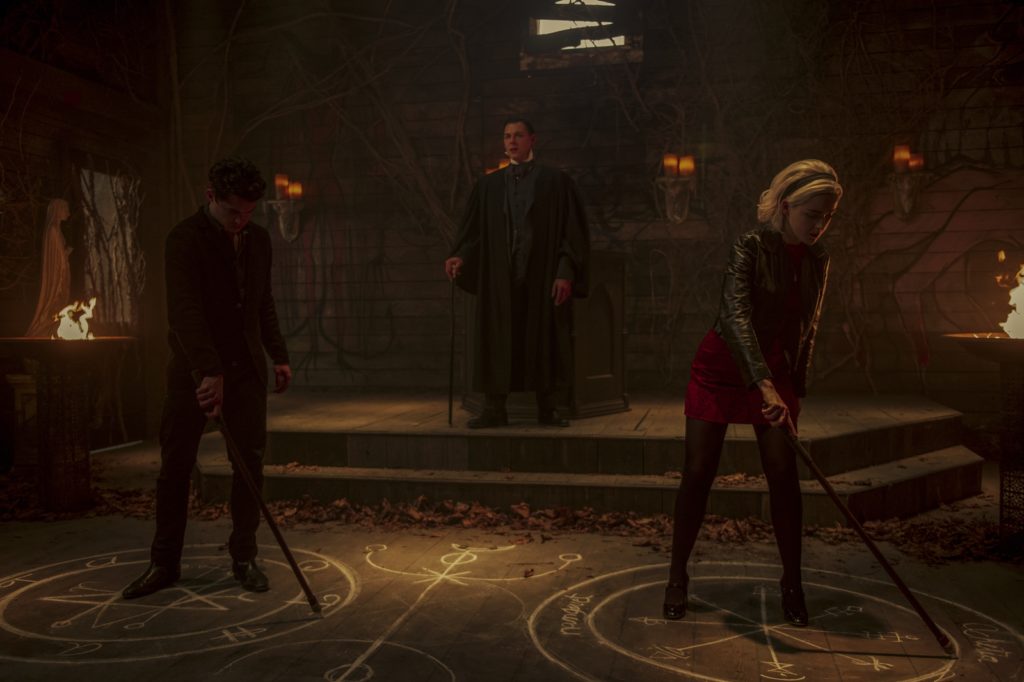 On the witch side of things is where these episodes thrived. The world building hits new highs as we learn more about its rituals, history, and general structure of the Church of Night.

The only possible drawback was now that Sabrina signed the Book of the Beast at the end of part 1, it seems the Dark Lord can’t leave her alone. He shows up so often in his goat form that you begin to wonder if the series should be renamed to “The Adventures of Sabrina and Goat Boy.” He is everywhere in this half of the season, and that’s fine, but with those horns of his he does tend to take up a lot of screen real estate in scenes.

By the end of the season, it does become a bit clear that you almost have to wonder why you root for the witches. Despite Sabrina trying to be a good person, everyone around her – even, yes, her aunties – will succumb to the Dark Lord when he asks them to complete tasks. Father Faustus Blackwood (Richard Coyle) is very clearly not a good person on any level and all the witches around him – especially the warlocks – are not to be trusted.

While series such as The Sopranos or Breaking Bad have given you reasons to root for the anti-hero, these characters are just clearly selfish, and that is what motivates the majority of them. As they come into Sabrina’s orbit you will begin to see some good come out in them, but in general, these aren’t anti-heroes, they’re just plain evil.

As the season draws to a close, the status quo has changed for nearly everyone, and it’s clear season 2 will kick off with a drastic shift in the power dynamics of the witch realms.

Despite its flaws in part 2, the ending already seems to address some of the issues I’ve gone over. It’s clear that Sabrina’s three mortal friends will be far more involved in her life going forward and that will eliminate some of the confusion why we spent time with them. The board has also been cleared of threats and reset a bit.

If you liked part 1, part 2 is essential viewing, just expect a few more bumps than you had last time. If you’ve been debating jumping in, well, maybe wait and see what we think of the start of season 2.