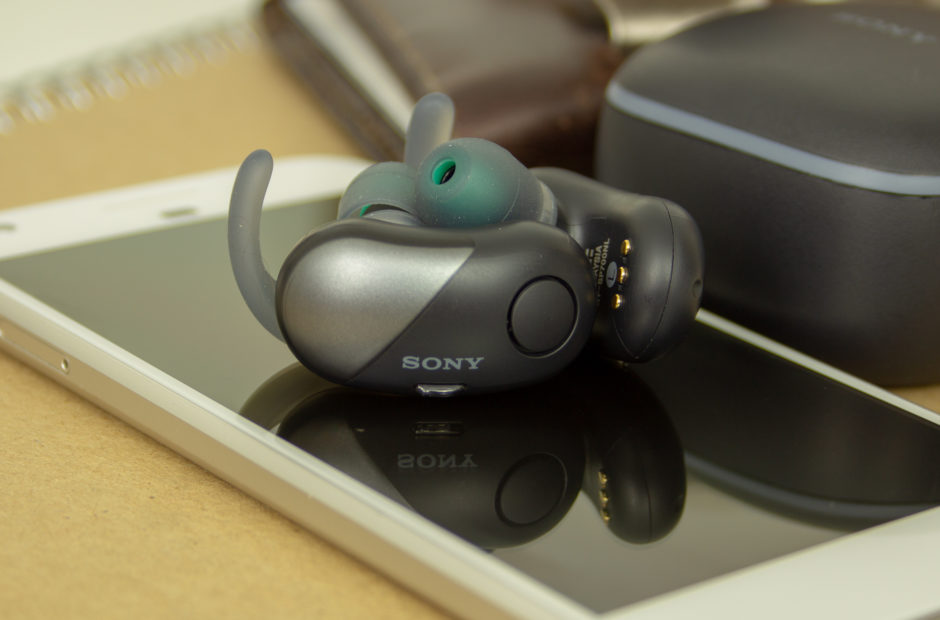 We’re finally at a point where truly wireless earphones are a viable piece of tech if you’re willing to pay the right price. But we’re also at a point where the baseline still hasn’t risen high enough that grabbing any set of is going to be a reliable experience.

Dig around enough, though, and you’ll find earphones that are both reliable and affordable. One such example is Sony’s WF-SP700N “truly wireless noise-canceling earbuds,” which offer a great feature set and solid sound without too many compromises for the surprisingly acceptable price of $149.

One of the problems I have – even with truly-wireless earbuds that I like – is that they often feel like they’ll fly out of my ear if I make a wrong move, and either end up in a puddle or be lost forever. Right out of the box, the SP700N earphones take care of both of those concerns with a great fit and sturdy build.

The look of the SP700Ns is pretty simple and says a lot about the intention. These are designed with an active lifestyle in mind and are a great fit for someone like that. They’re small, but light, and feature a single button and a single LED light on each earphone. They have enough design to look good, but not enough that they’re meant to be a fashion statement.

The light build means that when they’re in my ears, they don’t move around, but that’s also helped by the included silicon support fitting. The support does an amazing job of keeping the SP700Ns in my ears without ever feeling like they’re adding to the weight. These are legitimately some of the most comfortable earbuds I’ve ever worn, and I’ve worn them through entire 100-to-0 charges throughout my time testing them. More on that battery life later.

These earbuds are also IPX4 certified, so sweat is no problem. That aforementioned puddle might be a tougher situation, but there’s at least a chance these could survive that, even if it’s unlikely they’ll fall out to begin with.

The included charging case is more of a mixed… case. On the plus side, the earphones fit snugly into the case and I don’t feel like I have to jimmy them into place to get them to light up and start charging. The battery inside the case gives the earphones two full charges, which is super nice, and the case also offers NFC pairing, a feature I’ve come to really appreciate on the few headphones where it’s been implemented.

Now for a couple of downsides. One is that Sony has gone with a microUSB charging port for these instead of USB Type-C, which just means that I’ll have to carry an extra cable with me for that much longer. It’s not a huge problem, and is really more of a nitpick. The other problem, and a bigger one, is the lid of the case. When you first crack into the box, the case has a sticker on it demonstrating how to open it. Instead of flipping open clamshell style, it twists around. More than once, I handed these to people and watched them start to open it clamshell style, though, which tells me that the design isn’t intuitive. If I hadn’t been watching, I really feel like one of those people would’ve broken the top off. That top also doesn’t close very snugly, and that makes me worry about putting them into a backpack without having them in a dedicated pocket. Compared to other truly-wireless cases I’ve used, it feels a little fragile and it looks a little cheaper than I’d like, despite the other genuinely good design elements. 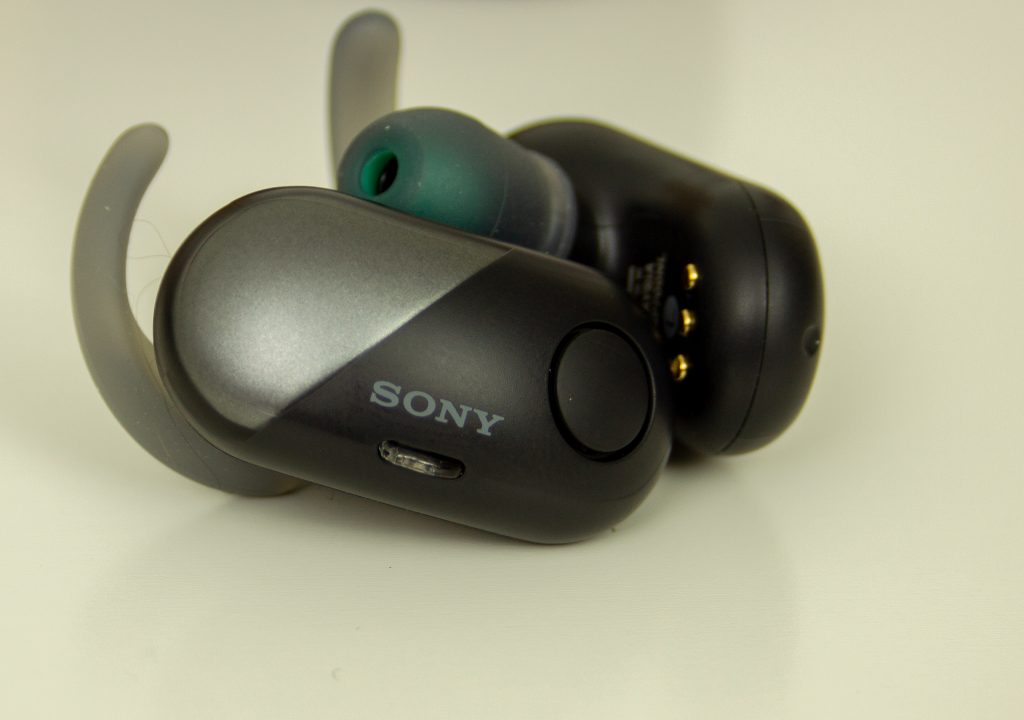 The SP700Ns have some stellar features, but there’s one big compromise made for the sake of weight and size that I can’t help but be frustrated with.

One appreciated feature is the inclusion of active noise cancelling. While I don’t really trust noise cancelling in cheaper headphones, Sony has found a nice compromise between the seal of the silicone eartips and the amount of noise cancelling. It actually improves the experiences of wearing the SP700Ns in a meaningful way.

If you download the Sony Headphones app, which is compatible with Sony’s 1000XM3s as well, there are a ton of settings available for toggling in there. I messed around with different sound profiles, modifying noise cancelling, and switched easily between sound quality and connection quality options. The buttons on the ears are okay for toggling between play/pause and isolation/ambient sound from moment to moment, but I liked using the app to get the settings I wanted.

The biggest compromise with the SP700Ns, though, is the battery life. They’re definitely on the lower end. Sony rates them as providing three hours of battery life, and my testing reveals that to be pretty accurate. Battery life is often tough to gauge without keeping notes, but more than once I sat working with the SP700Ns through an entire battery cycle. I just wish that wasn’t such a short time. A few times I got as little as about two and a half hours, so it varies depending on volume and such, but the range is from “pretty short” to “very short.” Even for true wireless headphones, it’s already on the lower end.

Another really minor gripe is that updating the firmware on the SP700Ns just plain sucks. You need to upgrade the firmware when the battery is full because they have to be out of the charging case, and the whole process takes about half an hour of time where the headphones and the phone handling the upgrade are unusable.

The noise-canceling feature and the relatively good seal provided by the SP700Ns meant that, for me, I had bass response that felt surprisingly good for true wireless headphones without having to cram them into my ears.

The bass has a little more reverb than I’d like, but it’s far from overwhelming. The guitar in Kyuss’ “Space Cadet” sounds deep and satisfying on the SP700N headphones, and I was surprised by how much punch Metallica’s “Of Wolf and Man” had in the opening drums. The bass is a little overwhelming in Miles Davis’ “Blue in Green,” but again, not so much so that I didn’t enjoy listening to it. The mids, in general, are solid across the board and I never felt like they were over-emphasized or like they receded into the background.

On that same track, though, I did notice the trumpets sounding a bit brighter than I’d like. When listening on “stable connection” mode instead of “sound quality” mode, the audio quality, in general, is significantly degraded, and that makes me worry about how they will perform in the long term for athletic use. Admittedly, if I was running, I don’t think I’d be listening for the detail in songs so much as the primary beat and melody, so switching to stable connectivity for running isn’t the worst compromise in the world.

I asked a friend who enjoys running to give the SP700Ns a run for their money. After a long run on her verifiably loud treadmill, here’s what she had to say:

“I played Zombies, Run while using the headphones because it has a combination of music and characters talking like a podcast. While I used noise-canceling, about 95% of my treadmill sound was gone with the music on, and about 85-90% when the characters were talking. It made it so much nicer to run with the treadmill drowned out. They definitely improved my focus and my enjoyment of a normally boring treadmill run. My last inner-ear [headphones] fell out when I ran from jostling, and these didn’t move – and were actually very comfortable.”

The SP700Ns are for a specific audience. The short battery life means these aren’t great for use in the home or office where you’re likely to wear them for long periods. Even though they’re more comfortable than I can possibly describe here, you’ll never be able to wear them long enough for them to become uncomfortable. Instead, they’re meant for athletes and commuters. These headphones will stand up well to daily abuse, and the ambient sound options mean that it’s easy to let in the outside world when you need to and block it out when it makes more sense. They’re good for a couple of hours in the cafe or the to-and-from bus ride between home and work. If you’re a runner and want some true wireless earbuds, these could be the best in the relatively small pack, especially at the sub-$200 price point, which makes them all the more appealing. They sound great, they feel great, and they’re pretty sturdy – totally worth a look.

Disclaimer: We received a review unit from Sony and used these for about 15 hours and lent them to a runner before starting this review.