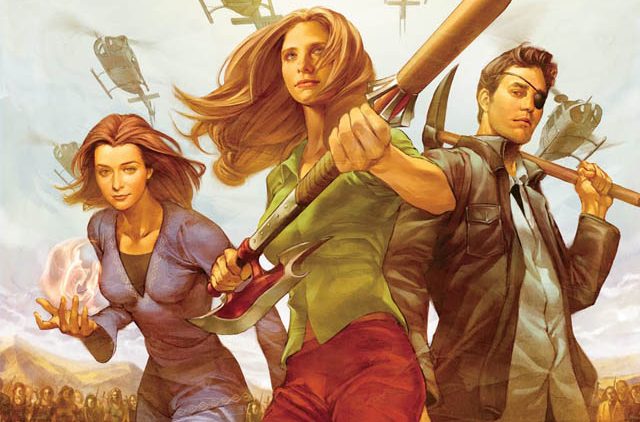 Buffy has just about slayed her last at Dark Horse as the rights to the comics are about to revert to the ownership of Fox.

Speaking with CBR, Buffy creator Joss Whedon confirmed what many suspected that Buffy comics will no longer be a part of Dark Horse. “Fox is taking the Buffy license and the Firefly license back. And Dark Horse has shepherded these licenses for decades now.” Whedon went on to add,” Similar to the show, we’re not going to close it all off in the sense of “Everybody’s dead!” Though we did think about doing that. [Laughter] But when I sat with Chris Gage, it was with the intent that after everything we’ve been through we wanted to have something to say that mirrors and rounds off where we started this comic [run]. And then they said, “You have four issues,” and it was like “Ohhhh. That’s all the time we have.”

There is, however, a gray area that apparently hasn’t been worked out quite yet. Before Buffy continued in comic book form, Whedon created a series set 300 years in the future about another slayer named Fray. Because she was created for the comics, but also ties into the end of the Buffy comics, things could get a bit sticky. When asked, Whedon stated, “I don’t know what’s going to happen with [Fray], actually. I mean, legally. I heard about all of this after the fact. It’s like Disney taking Star Wars over to Marvel. All the sudden we realize this is happening. So I’m writing this from a position that will leave everybody in a position where you feel some closure, but it’s definitely not, “Oh, I know I wont’ ever want to read about them again.”

With Disney’s purchase of Fox a foregone conclusion at this point, it seems inevitable that Buffy will end up a Marvel Comics series at some point. It’s not difficult to imagine, however, that the creative team will probably change. Will the already published seasons be removed from canon? It’s just too early to tell at this point.

If the exit of Buffy follows the Star Wars model of departure from Dark Horse, the comics will soon go out of print. If you’ve been putting off picking them up for your collection, you may want to act sooner rather than later.