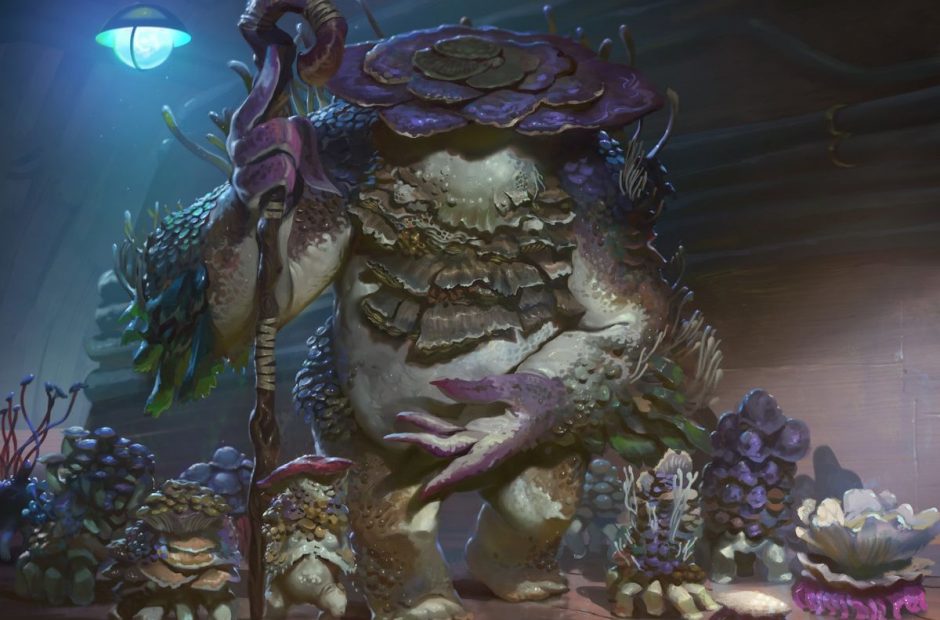 Slimefoot the Stowaway emerged as the fan-favorite of the uncommon Legendary creatures in Magic the Gathering’s Dominaria expansion. His color pairing of Black and Green, as well as his supported theme of Saproling tokens, have been a runaway success in both Draft and Sealed formats. Most professionals and everyman players alike are in agreement that when it comes to Limited play, Slimefoot and his army of 1/1 minions are exactly where you need to be at every Friday Night Magic table. 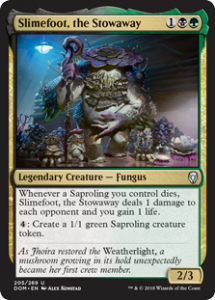 In Standard, however, Slimefoot hasn’t had nearly the same impact that Wizards of the Coast wanted. The emergence of Tendershoot Dryad as a Limited-superstar-turned-constructed-stud, a cheap Saproling lord in Sporecrown Thallid, and excellent common and uncommon ways of generating Saprolings all account for nothing thanks to a single little Goblin that has rendered entire decks useless with his overpowered ability.

Until Goblin Chainwhirler gets himself banned for his utter dominance for the format, Brawl appears to be the most prevalent place for Slimefoot to turn up as a staple. Slimefoot’s life-draining ability is easily exploited with a fair dose of ramp, sacrifice outlets, and of course, Saproling generation, All of these themes combined grant him the long-game strategy to hang with several of the slower, all-powerful Mythic Rare generals of the format.

Not bad for an uncommon. 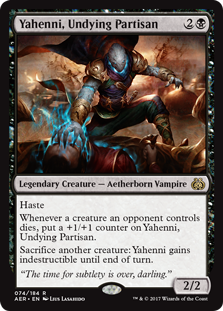 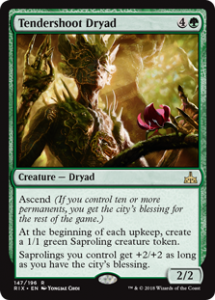 Now, I believe in the future of Brawl, but I am also aware that its announcement has came at a bad time. Nobody is really ready to invest in the format just yet thanks to a huge Standard rotation coming up later in the fall. Four sets, Kaladesh, Aether Revolt, Amonkhet, and Hour of Devastation, will no longer be playable, and they’ll be taking a good many powerful cards along with them.

Unlike EDH, which allows for cards from any era to be used, many cards you love to use in your Brawl decks will no longer be legal from this October, turning the young format on its head. Why bother taking it so seriously when it’s going to be completely different just around the corner?

Consider Dominaria’s release and healthy dose of Legendary creatures to be a test run, one that gauges interest in the new style of play and helps work out any kinks. When Core 2019 comes out next month and the rotation occurs with yet another return to Ravnica in October, we’ll have a good solid year or two to turn Brawl inside out and find out what really works.

And luckily, Slimefoot the Stowaway’s deck will emerge from the 2018 rotation relatively unscathed. Many of his cards stem from the Dominaria expansion, and only two or three essential cards will need to be replaced with newer ones. Today, we’ll be looking at several of these important cards and any alternatives that might already exist or have been spoiled.

However, it is the method of properly utilizing these Saprolings efficiently that might be taking a hit. Attacking a horde of 1/1 creatures rarely gets the job done since opponents would rather soak up their damage rather than block them, kill them, and still take damage while you gain life from Slimefoot’s ability. Not very efficient.

Sacrifice outlets are the best way to pick off your own Saprolings, and it is here we lose a superstar of the deck. 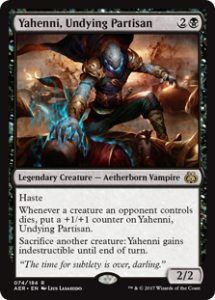 Yahenni, Undying Partisan is Slimefoot’s absolute best friend. I doubt even Nick Cassavetes could write a proper book to capture the love these two share. With Slimefoot and his buds cranking out Saprolings every turn, killing Yahenni becomes a mounting task. Each Saproling on the board gives him the potential to become indestructible, and when Yahenni uses his native ability to become indestructible, you gain life and pick away at your opponent’s life total. Symbiosis defined!

If you’ve played BG Saprolings in Limited, you know this life loss really piles up. And if you’ve ever played with Yahenni, you know he only gets bigger and bigger!

What also separates Yahenni from the rest of the sacrifice outlets is that this can be done for free and at instant speed. This combination of cheap cost and abrupt speed can save your life total in a pinch, disrupt up an opponent’s combat, and win you the game on the spot if their life total falls low enough. 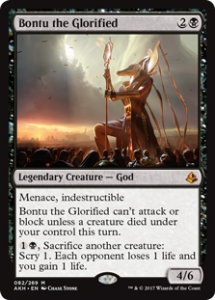 Other sacrifice outlets rotating out include Bontu, the Glorified, who allows for instant speed sacrifice but costs mana to do so, and Defiant Salvager, which allows for free sacrificing but can only be enabled during your turn at sorcery speed. Razaketh, the Foul Blooded also can sacrifice Saprolings efficiently but requires your own life points to do so. Slimefoot’s drain effect makes his ultra-powerful ability cheaper, but it also can’t be used infinitely.

Be careful not to kill yourself in the process! 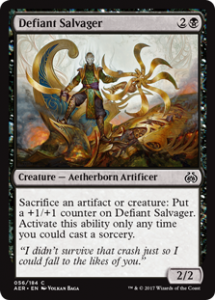 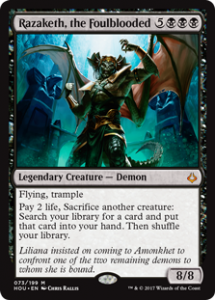 All three are excellent sacrifice outlets but fall in the face of Yahenni.

With the Legendary Aether Vampire rotating out, he’ll be replaced by the likes of Ruthless Knave, Thallid Omnivore, Thallid Soothsayer, and Togaar, Famine Incarnate, all of which require mana payments to sacrifice. Fungal Plots is also an efficient sacrifice outlet but requires two Saprolings, meaning you’re stuck if only a single one is on the board, and Whisper, Blood Liturgist only allows two to be sacrificed a turn.

Again, these all get the job done but not nearly as efficiently as Yahenni. Only if something like Nantuko Husk gets reprinted in Core 2019 can he be properly replaced. 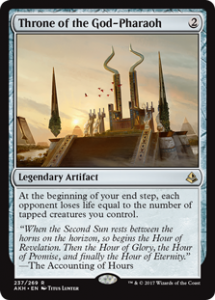 Throne of the God-Pharaoh would have been an overpowered card in Standard had quick aggro decks or bulky mid-range decks not dominated “go wide” decks in Magic for the past year or so. With dozens Vampires, Merfolk, and Saproling tokens running around the battlefield, this dangerous card can close the game on the spot at the end of a turn if left unchecked.

With Slimefoot’s ability, it becomes twice as dangerous. This card can be combined with Song of Freyalise, using Saprolings to generate mana for big creatures, or any Vehicle, which allows any number of Saprolings to crew and safely tap, creating huge loss of life for opponents at the end of a turn. After the loss of life, simply follow up with Yahenni or Fungal Plots to sacrifice the tapped Saprolings, doubling the damage you take.

With just five Saprolings on the battlefield, the combination of Throne of the God-Pharaoh and Yahenni can create a 15 point life swing. Not bad for an artifact that costs two mana to cast.

Other cards – Wipes and Removal 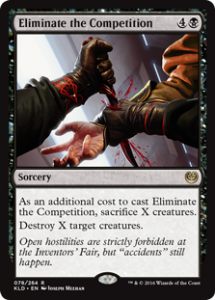 Board wipes aren’t as efficient as sacrifice outlets in Slimefoot’s deck, but you can’t argue with the power that Eliminate the Competition brings to the deck. Not only can you sacrifice Saprolings to it, you also don’t have to lose your best creatures in the process! Trade five Saprolings for five powerful creatures and create a 10 point life swing, all while protecting your board state and leaving an opponent wide open for attack?

Bontu’s Last Reckoning can be a game-ender if you kill off enough Saprolings, but it’s not the safest way to clear the board. Neither is Yahenni’s Expertise, which can easily kill off your Saprolings as well as any small creatures opponents have. The problem with these cards is that they will kill off our slimiest footed general, who needs to stay alive at all costs for the deck to work. 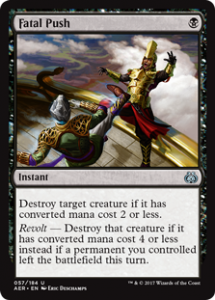 Removal isn’t essential with Slimefoot’s game plan either, but it’s always best to be prepared for the worst. Fatal Push does a lot of work in any sacrifice deck, and it will sadly be leaving us this October. With no more one-mana removal spells, killing off early plays will be come much more difficult.

Vraska’s Contempt is the cleanest removal spell in Standard at the moment if you are down for the cost, both mana and financially, and Vicious Offering not only kills off a Saproling for life drain, it also can remove anything smaller than The Hulk himself.

If the stars align, Yawgmoth’s Vile Offering also acts as a game-changing removal spell, as well. 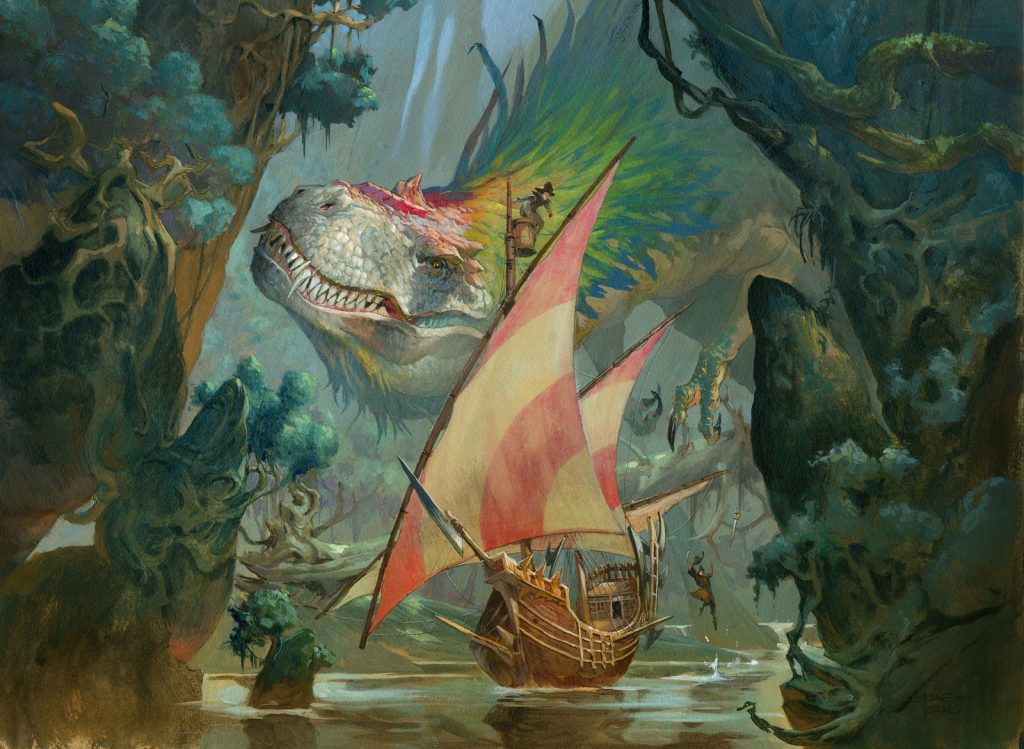 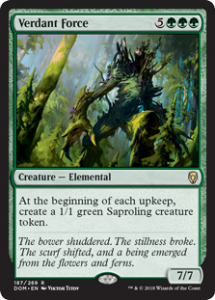 As you can see, losing only two or three back-breaking cards, one of which has plenty of nearly efficient replacements, means that the Slimefoot Brawl deck is going to be a contender once Standard finally rotates this coming October. Core 2019 is still slowly being spoiled, and while I don’t see any “must haves” among their ranks yet, you can bet that Slimefoot is going to be the focal point of any Brawl deck I slap together in 2018.

I mean, his name alone is enough to inspire me.