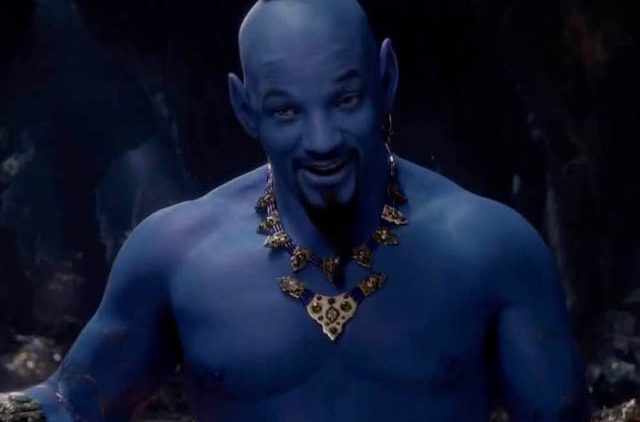 Walt Disney Pictures released a new First Look on Sunday night for Aladdin. The one minute spot finally shows us some actual action as opposed to some general location shots as we saw in the previous teaser. The big moment, however, was we finally got a look at Will Smith’s Genie in blue.

In some previous images that were released, the Genie looked like Will Smith and there was no blue to be seen. The actor then promised that he does indeed spend a good portion of the movie in the classic color. The problem now, however, is that fans still aren’t thrilled with the look.

Starting a support group for everyone who can’t unsee Will Smith’s genie.

I'm a huge Will Smith fan but this…….

A thrilling and vibrant live-action adaptation of Disney’s animated classic, “Aladdin” is the exciting tale of the charming street rat Aladdin, the courageous and self-determined Princess Jasmine and the Genie who may be the key to their future. Directed by Guy Ritchie, who brings his singular flair for fast-paced, visceral action to the fictitious port city of Agrabah, “Aladdin” is written by John August and Ritchie based on Disney’s “Aladdin.” The film stars Will Smith as the Genie; Mena Massoud as Aladdin; Naomi Scott as Jasmine; Marwan Kenzari as Jafar; Navid Negahban as the Sultan; Nasim Pedrad as Dalia; Billy Magnussen as Prince Anders; and Numan Acar as Hakim.

Aladdin hits theaters on May 24.