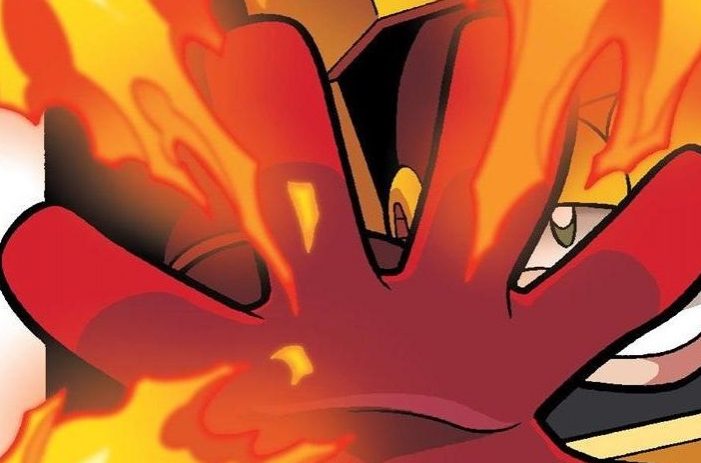 The inclusion of Torch Man in Mega Man 11 really got me thinking. Man, Mega Man has had to deal with a lot of fire over the years, hasn’t he? Almost every time Dr. Wily rampages through the town on one of his maniacal meltdowns, his brain cranks out yet another metallic creation that burst into flames in some way or another.

Today, we’re going to celebrate these distinguished robots by ranking them. How cool (or hot, I should say) they are, how iconic they are, how much they inspire the inner pyromaniac inside all of us.

These are the best of the best (or worst of the worst) fire-themed Robot Masters that Mega Man has had to douse the years. 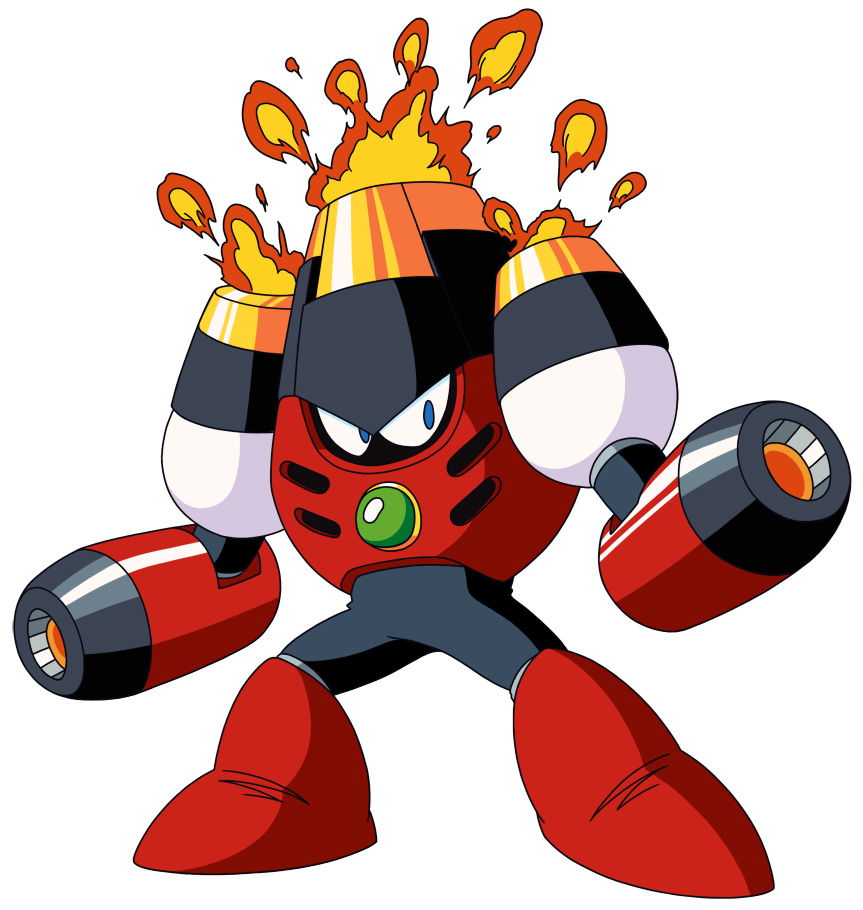 What is this? Magnet Man went out for drinks one day after his daily, dastardly deeds and woke up with a party foul. Poor dude lost his magnet!

For those who don’t know, Mega Man 3 for DOS is one of the worst video games off all time. I know it’s an internet joke nowadays, like the Star Wars Holiday Special, but I actually bought that game and lived through it. Don’t bring it up with me and expect a nostalgic chuckle. I didn’t own an NES until later in my childhood, bought this game so I could play it on my family PC, and felt my soul shatter once I fired it up. Awful, awful game that doesn’t deserve an ounce my humorous cynical sentimentality.

The developers of this unfortunate misstep in Mega Man’s history were so lazy that they didn’t even create their own Robot Masters. The simply remodeled ones that already existed, hence… Magnet Man without his magnet.

There is no character art, thank goodness, so I’ll go ahead and post a video of his fight with Mega Man. How pathetic.

Ehhh, I’m not buying it. Magma Man’s design screams of “look at me, I’m a Robot Master, too!” He stands solo as the uninspired dud in the otherwise fantastic line-up of baddies in Mega Man 9. You’d think having a volcano bursting from your skull and shoulder blades would be impossible to mess up, but somehow, the artist wasted such potential with a generic armor design.

Sorry, not a fan of Magma Man. I get that Mega Man 9 was supposed to look like the older games, but I don’t have the same complaint with his compatriots. All of them turned out just fine. 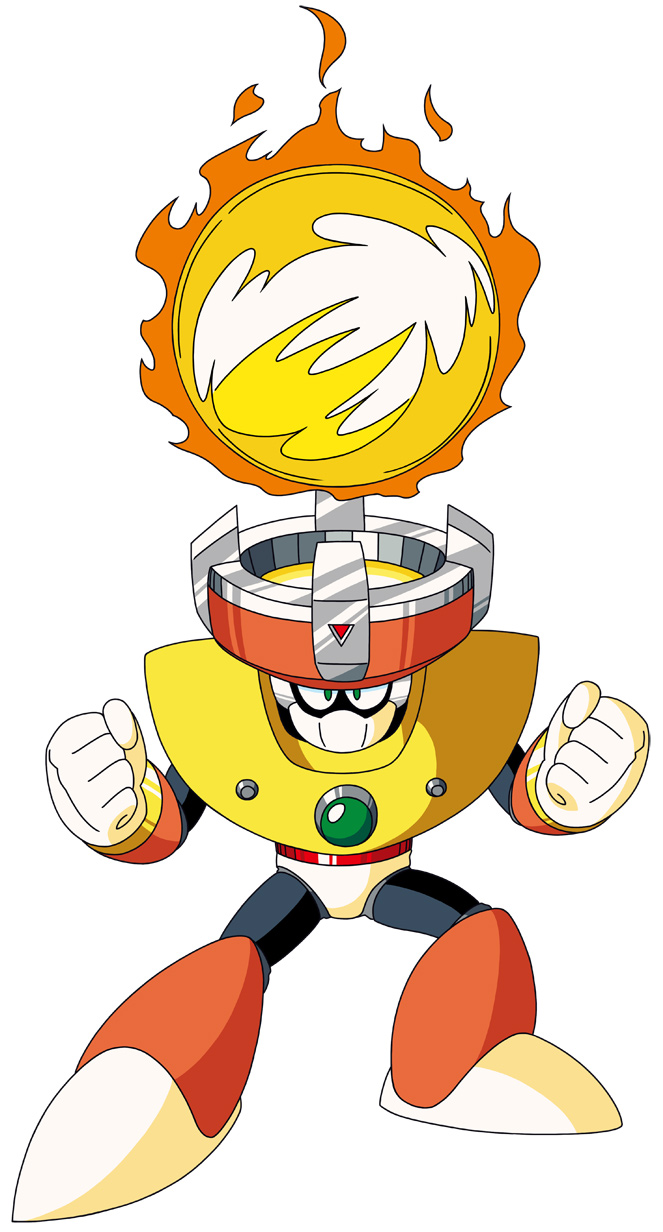 That’s a little better if inspiration is what you’re looking for. Solar Man has a supernova exploding from the kingly crown propped on top of his dome, and he’s ready to hurl it at Mega Man with a flick of his… neck?

Too bad that orb hovering over him makes him look like a total goof. He doesn’t even get full points for originality since he’s in direct competition with Mega Man 10’s Sheep Man. You lose that battle every single time! 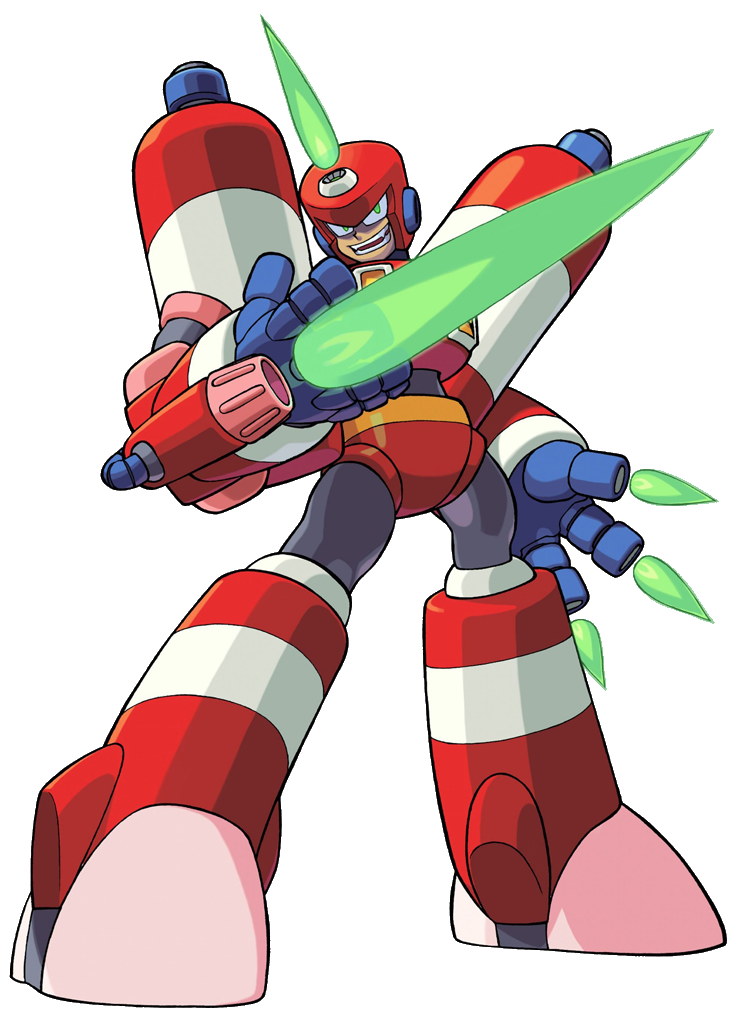 We’re crossing over into the designs that I actually like, so I’m going to have to start nitpicking to separate them from one another. We all remember our first campfire experience, tossing wood into the fire and watching the flames leap before our eyes, comforting us in the cold, dark, expansive night. Then, some genius in your group decides to toss in a candy wrapper or cookie box into the pit, and the flame turns green!

That’s a memory that Burner Man invokes. The dude has green flames blazing from his fingertips, wrists, and forehead! One can only imagine what chemicals those huge tanks on his shoulders contain. Plus, he’s the first fire-themed Robot Master we see who shows his face, and we can see the maniacal desire to burn everything in his eyes and smile.

Why is such a cool design so low on this list? Well, he was designed after Bunsen burners, which burn blue, not green, unless you’re burning something copper-based. Simple scientific oversight, like featherless dinosaurs. You don’t support that nonsense, do you? 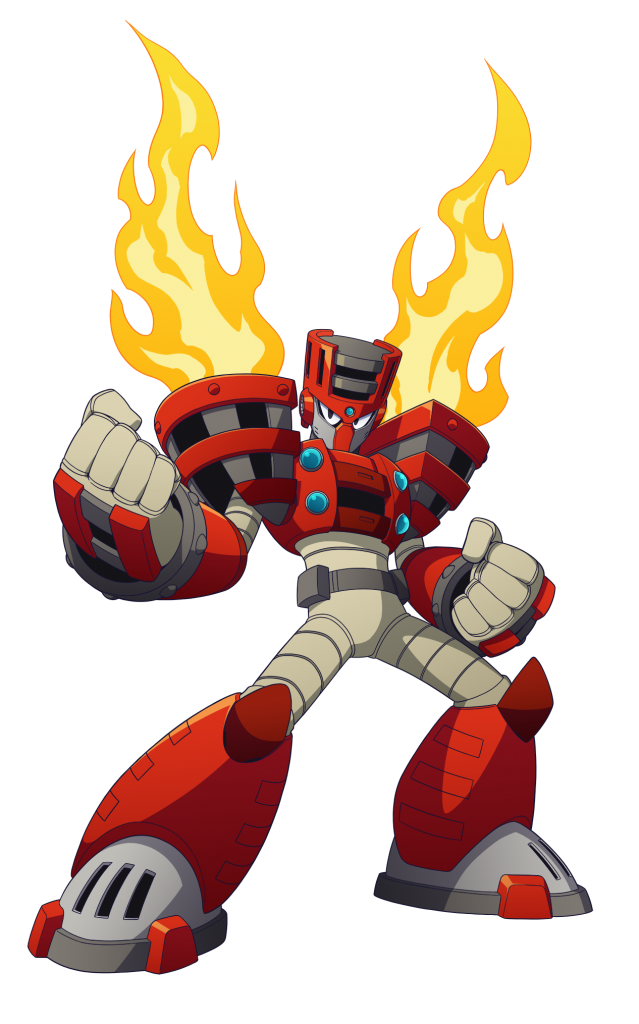 Now, this is cool!  Capcom has a winner with Torch Man, a character that is able to dodge the pitfalls of Magma Man and overcome some generic decision choices, like flaming shoulders, with some inspired, badass armor. The grated boots that look like furnaces, the pipe legs, the face-mask that divides his face into two halves, and those rockin’ shoulder pads that live up to his name. 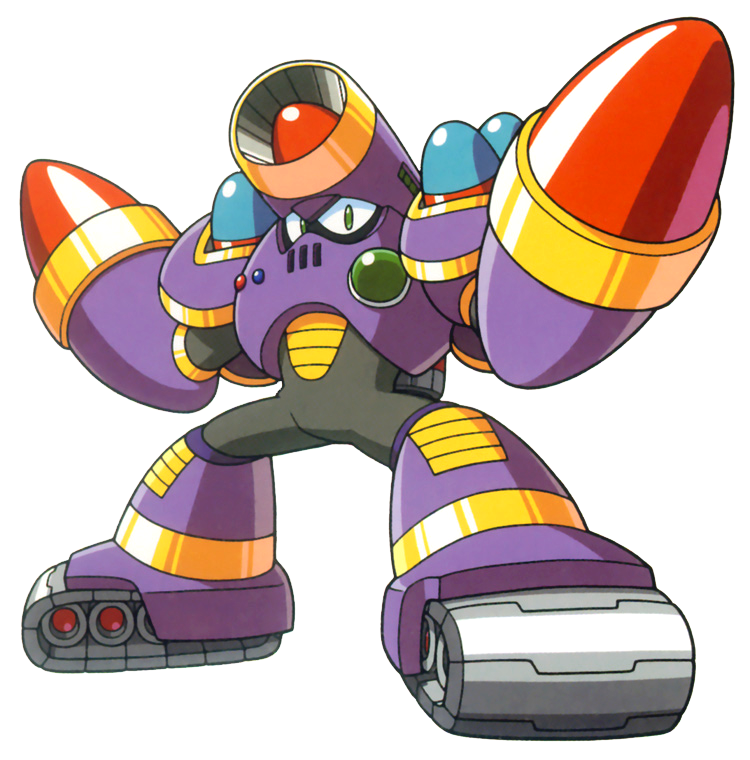 Napalm Man, a walking, talking weapon of mass destruction all on his own. He rocks with those rocket arms, bombing shoulders, tank-tread feet, and destructive, menacing eyes. Capcom wanted a Robot Master so evil that it didn’t even give him a mouth to smile, just a trinity of lifeless slots that resemble a mouth.

Again, what holds him back? Napalm Man suffers from one downside beyond his control. He’s a Robot Master in Mega Man 5, ugh. 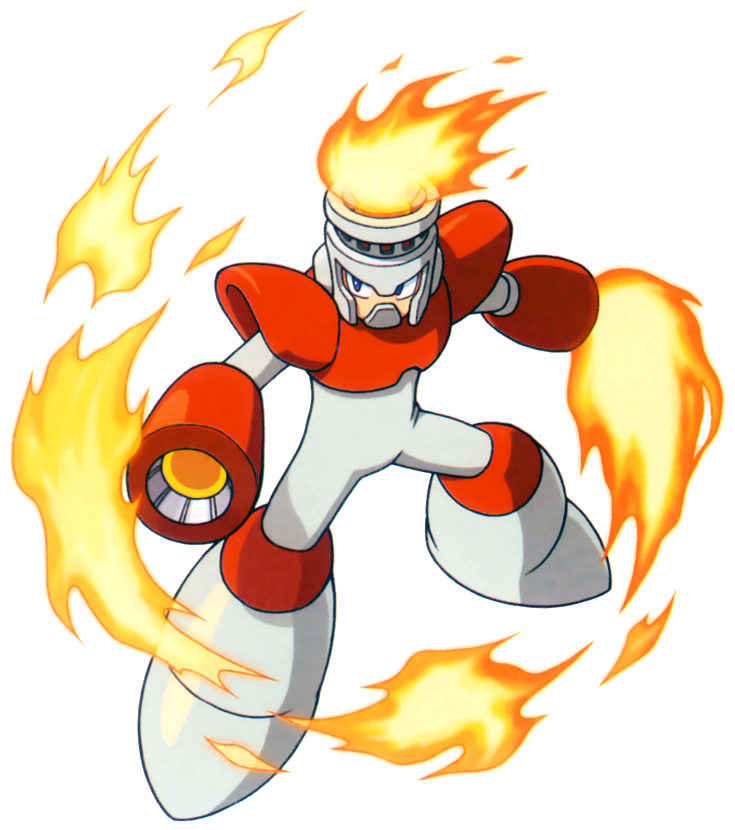 Clean, efficient, classic. Each of the original Robot Masters holds up, especially Fire Man, whose torch cap is rad enough to make Torch Man feel insecure and inspire Solar Man want to rethink some life decisions. Fire Man was the first Robot Master to sport two arm cannons, and he was the first to dawn a face mask to hide the emotions of his mouth.

Is he enjoying his role as a Robot Master? We’ll never know since his “bad man behind” blue eyes are not enough to tell by themselves. For all we know, he’s really sad under there.

Are we cheating with this one? Well, those are purple flames behind him, are they not? Robot Deity of the Undead here resides in a submerged oven of a tomb under the burning hot desert, and he give players a charging fireball as a weapon after being destroyed.

I don’t think it’s a big stretch to call him fire-themed. He’s even got a face mask!

Either way, Pharaoh Man is one of the most inspired Robot Masters in the series’ history. Just look at this guy and try not to fall madly in love with him. You read the name Pharaoh Man, you become both curious and excited about what you’re going to see, and one you see the design, you’re not let down one bit.

Pharaoh Man excels at what you would expect to find in a Egyptian themed Robot Master, and that’s all we can really ask for. Shame his level is just so hard! 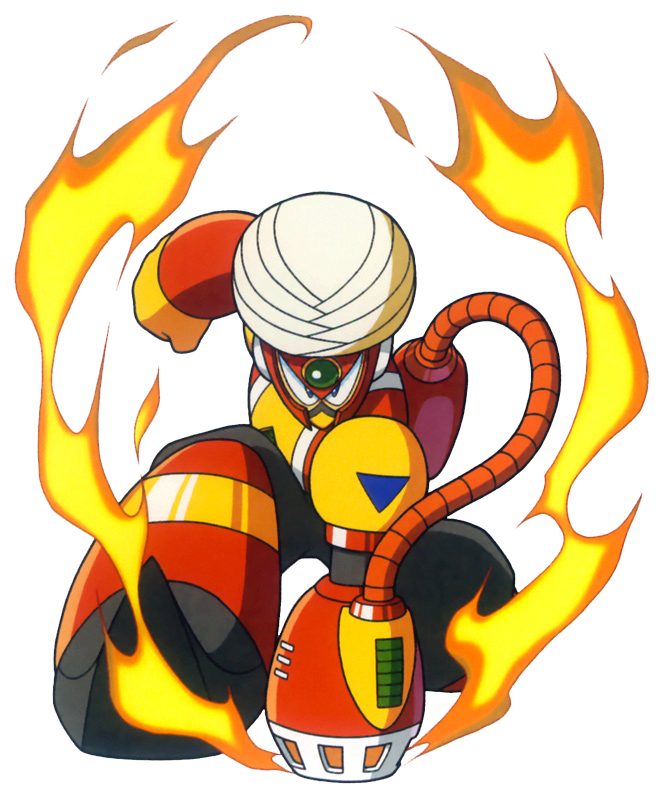 I’ve always thought Flame Man was a killer design choice. The turban is cool, but even more impressive is that sweet tube that runs from the tank on his back into the charging meter on his arm cannon, a unique design choice I’m surprised hasn’t turned up in more Robot Masters.

I also like his pointy shoes. Reminds me of The Prince in Prince of Persia: Sands of Time. 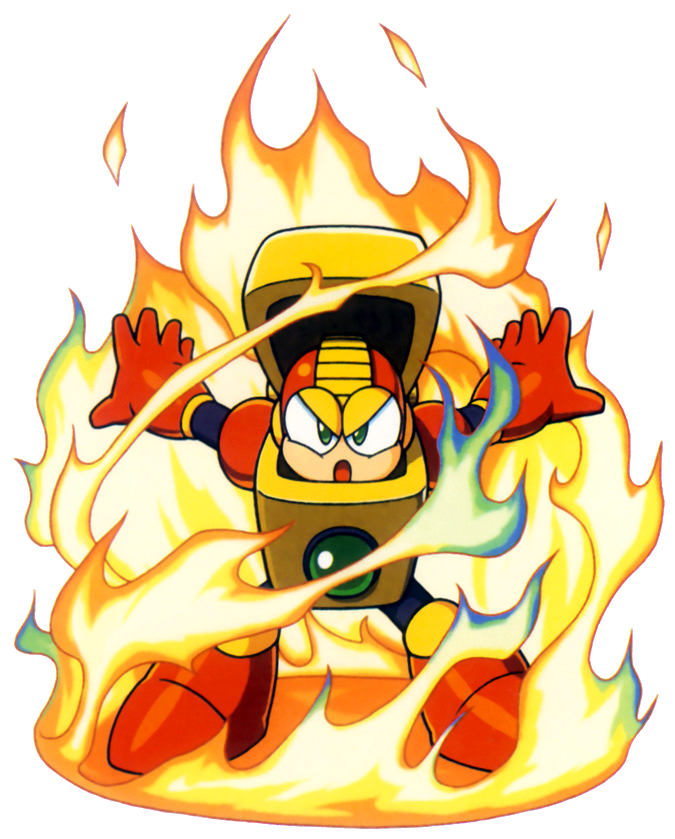 Heat Man is a walking, talking Zippo. Everyone is quick to point out his outer armor looks like a lighter, but they also frequently miss the design on the back of his head, which is shaped after a rotating spark wheel found in all basic lighters. Outside of that, he’s got those big bulging green eyes and, dare I say, cute chubby face.

And he doesn’t even wear a face mask!

Don’t be fooled by his cherub look. Heat Man becomes indestructible once he turtles into his protective shell, and not even the dousing powers of Bubble Lead will help you at that point. You best dodge… or else!

Heat Man is one of the many top notch design choices that keep Mega Man 2 solidified as the pinnacle of the series and one of the most beloved video games in history. If every video game had their own Heat Man, this world would be a better place.