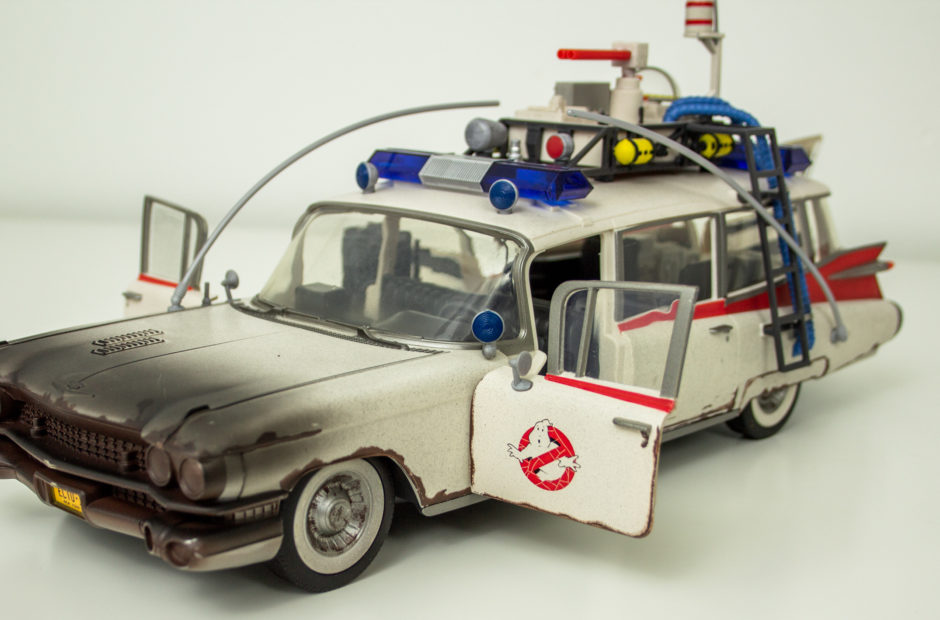 It’s almost trivial these days to find cool toys and models from stuff like Marvel, DC, and Star Wars. Each license has its own premium line with great packaging and good-looking toys. For things like Ghostbusters it can be tougher. Yeah, you can make a line of toys with dope packaging, but if you’re not careful with those face sculpts, you get a Venkman that looks less like Bill Murray and more like Ted Cruz. Yikes. That makes it that much more satisfying when something drops that you can get on the shelf at Target and be happy with, like the Ghostbusters: Afterlife Ecto-1, a toy that feels impressively authentic and high-quality for the price.

Why does it look charred? 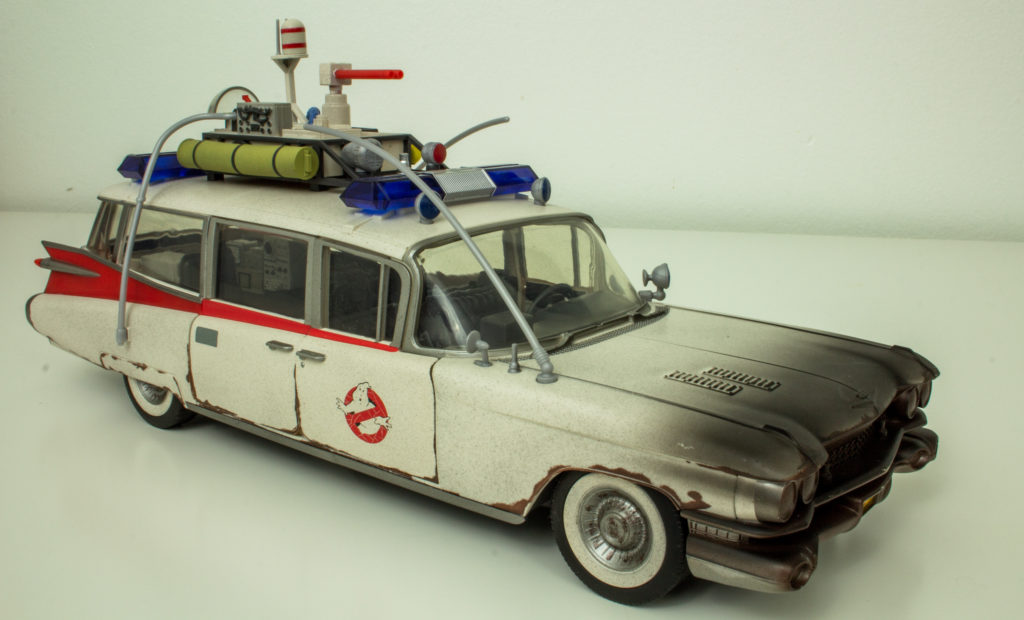 This ain’t the Ghostbusters all us old kids remember. This version of the Ecto-1 is based off the one we’ll see in the upcoming film Ghostbusters: Afterlife. Afterlife is the direct sequel to the first two Ghostbusters films, which was originally set to hit theaters last summer, in July 2020, in a world where our polticians took the Coronavirus pandemic seriously and we got to go to movie theaters again. You know, that one.

So why is it here, right now? The giant gears of toy manufacturing are hard to stop once they get moving. A movie delay is certainly annoying for us moviegoers, but once a movie is done, it just sits on a hard drive somewhere waiting for release. Once manufacturing for a toy spins up, though, all the molds are taking up space, and all the toys that eventually come out will end up in boxes in a warehouse, taking up space there, too. In other words, the movie can be delayed, but once the toys are being made, they have to come out.

So that’s how we get toys months after a movie’s promised release date but long before the movie’s actual release date. But that puts us in a bit of a weird spot. We haven’t seen the exact movie this version of the Ecto-1 is from, so we don’t know yet how we feel about it. So we can respond to our feelings about it based on the original movie and some images and trailers from Afterlife. 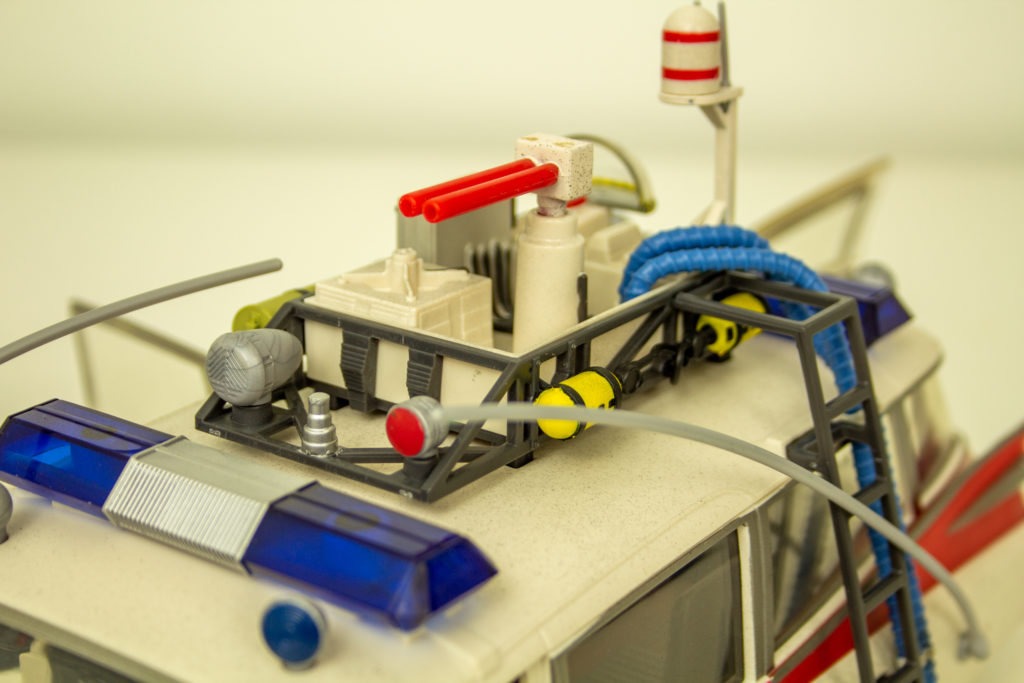 If you remember Ghostbusters 2, you might remember that the boys in beige made a few modifications to the Caddy, stacking it with LED signs and containers for the happy goop they were using to fight the angry goop. None of that is here. It seems that after the events of Ghostbusters 2, the guys stripped a lot of that stuff off, leaving us with a largely-restored Ecto-1. That, then, is what we have here–the original Ecto-1, ravaged by time and ambient moisture, with modifications made for modern-day bustin’.

There are tons of little details that make this especially impressive when I compare it to lots of previous renditions of the Ecto-1. The dimensions are about right; hearses are long cars that look like stretch limos for dead people. They’re not station wagons, and some Ecto-1s make that mistake. 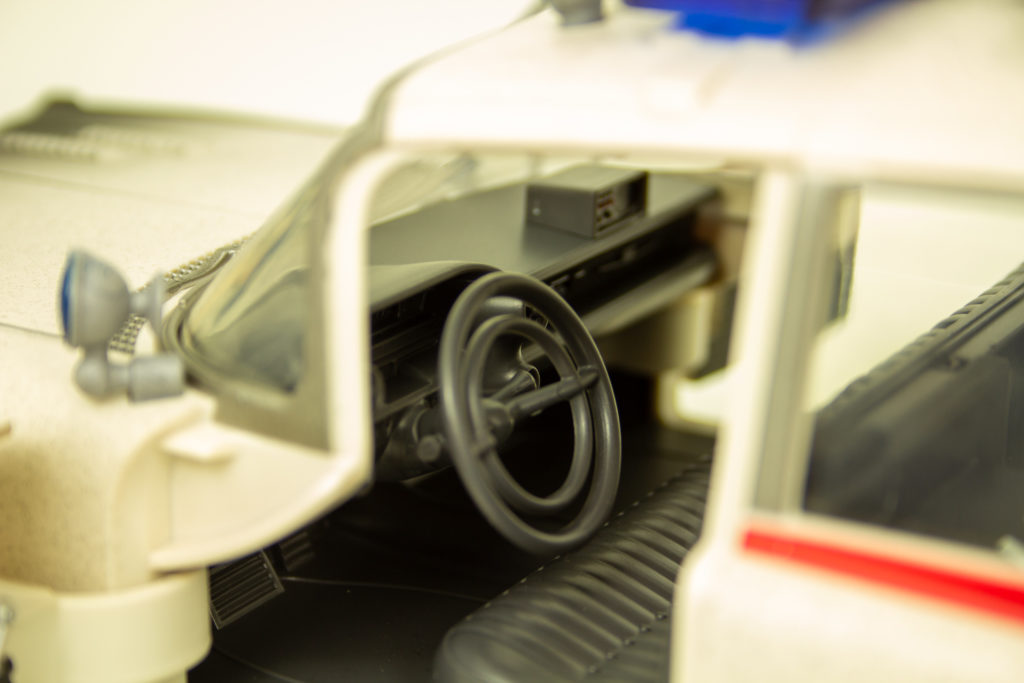 There’s also a lot of paint detail throughout. The yellow compressed air tanks on the drivers’ side have black brackets holding them on. The signal light next to those is red. Around the back, the half-dome directional dish is clear with a checker-pattern band around the base. The car, having sat in a barn for a few decades, has rust around the doors and wheelwells, and it’s subtle without being overwhelming. The char on the front is significant without being overpowering; you can still see the Cadillac logo, and the ECTO-1 license plate is clear as day.

The paint details continue to the interior. The interior is largely just grey throughout, but it’s not without its charms. The front doors have the dual window cranks seen in the 1959 Cadillac hearse that the Ecto-1 was built from, showing a great attention to detail. In the back seat, you can see the Remote Trap Vehicle’s labeled control box, even though it’s not reachable or movable. The far back has a bunch of different dials and readouts painted red, white, grey, and black.

There are a lot of mechanical details, too. The front drivers’ seat, both passenger doors, and the trunk door all open with a sliding mechanism that moves smoothly; the doors all click into place when closed, too, so they shouldn’t pop open unless your toy is haunted. The mechanism doesn’t feel especially sturdy, but it’s more than sturdy enough for display and occasional toying around. Even the bottom of the car has plenty of detail to make it look like a car, and the wheels spin in case you’re feeling extra frisky.

On the passenger side, you can see the pop-out rear seat from the trailers, and that seat actually pops out. In the back, the Remote Trap Vehicle sits where the Busters’ Proton Packs once sat, and there’s a peg there to keep it in place. 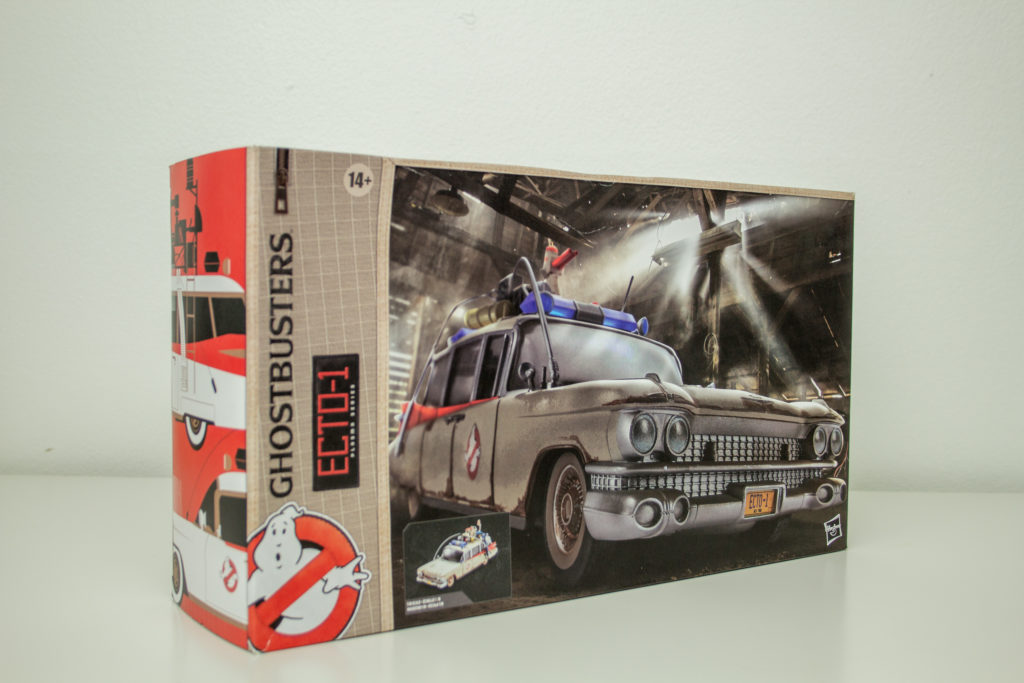 The Ghostbusters: Afterlife Ecto-1 does require a little bit of assembly. Things like the antennae, the ladder and blue piping on the driver’s side, and the red PKE array on top have to be put on. There are no instructions to tell you where things go or what order to put them in, but we didn’t have any trouble figuring out which items went where, and the on-box images provide enough clues.

If you’ve purchased some of the premium Ghostbusters figures released in the last couple years, they’re going to dwarf this thing. Even the 1980s Real Ghostbusters figures are like Dwayne Johnson trying to fit into a hypercar. The only figures you’d get into this thing are Micronauts-sized toys. And if you’re reading toy reviews online, you’re probably old enough to remember Micronauts. Nerd. 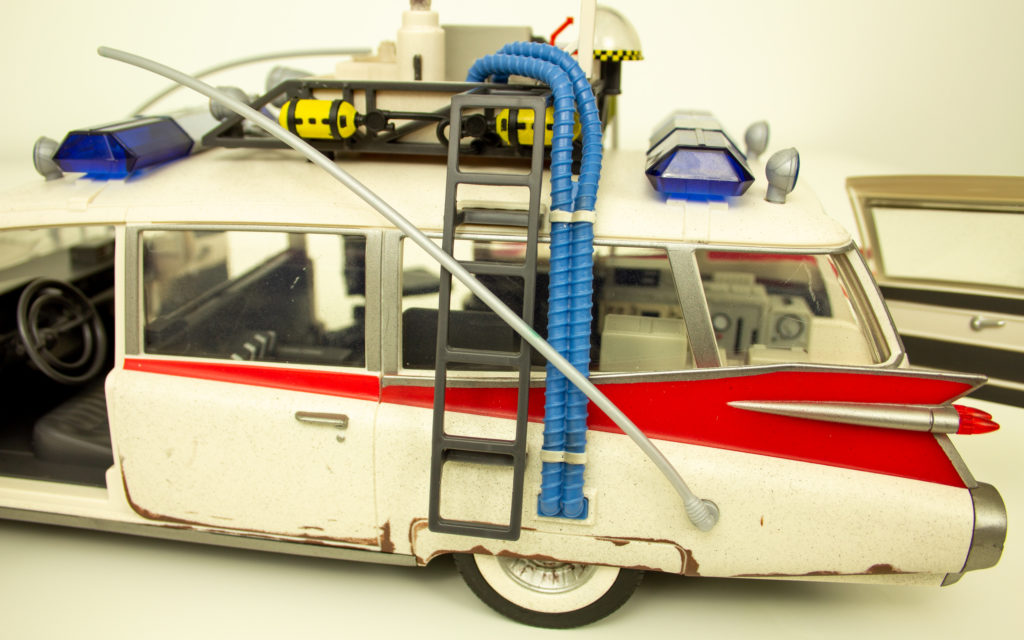 We only have a couple of complaints about the Ghostbusters: Afterlife Ecto-1. The amount of gray on the inside is disappointing. Just a little bit more detail would’ve really brought the front seats to life. The white paintjob is also pretty drab. The car is meant to look old, to be sure, but the designers went with a semi-gloss paintjob that makes the toy just a bit less believable and immersive. There’s no real textural difference between the main body of the car and the charring on the front. The white paint itself isn’t white, either. It seems like there’s a light speckle coating either sprayed across the car or mixed into the plastic. The whole thing looks white at a distance, but close-up it’s impossible to miss. If it was a cost-cutting measure, then that’s fine, but if it was sprayed on afterward, then that’s a little confusing. The car is white. Why make it look less-so? More gloss and brighter white for the car body would’ve added some nice contrast.

The whole package costs $50. Considering what’s in the package–a faithful, detailed representation of a truly iconic movie car–it’s not bad. With lots of great visual details, enough moving parts to make it entertaining, and no truly noteworthy dealbreakers, this is a great addition to a display shelf for a Ghostbusters fan or 1980s movie nerd.

The Ghostbusters: Afterlife Ecto-1 was purchased with personal funds and fully assembled before beginning this review.