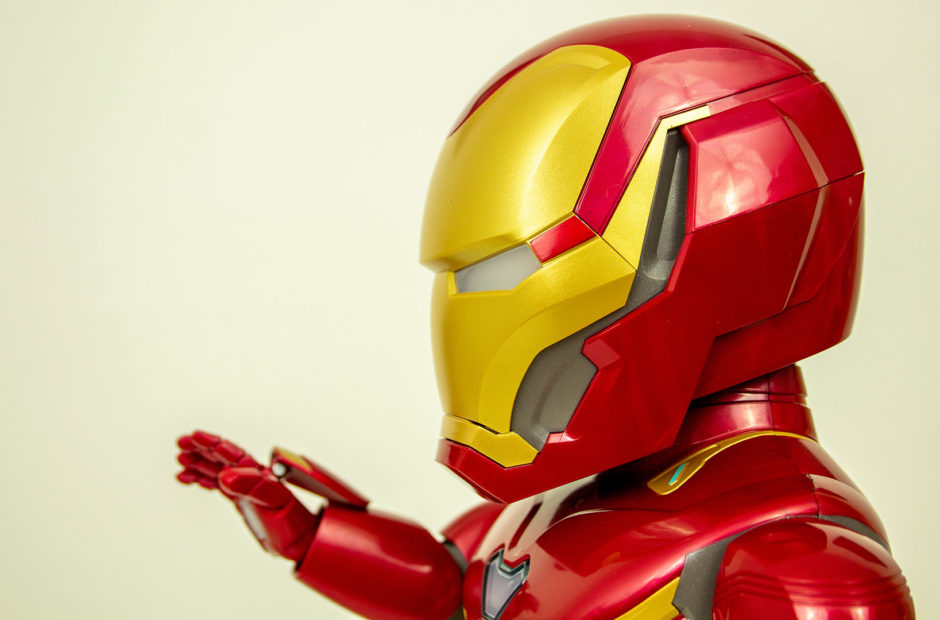 Capturing the essence of what makes Iron Man Iron Man is no easy feat. Marvel Studios spent hundreds of millions of dollars doing it, and comic-book writers have been chasing the idea for decades to varying levels of success. Sega tried to do it back in 2008 with an Iron Man game. Now, robot maker UBTech wants to capture the essence of Marvel’s most high-tech hero and put it into a toy, the Iron Man MK50 Robot. The company is not new to consumer robots, having been in the business for a good decade, but the Iron Man MK50 Robot is the most ambitious toy they’ve made yet in terms of merging pop culture expectations, technology, and fun. At $289 U.S. retail price, this is not a cheap toy, so UBTech is asking a lot – and has to deliver a lot, as a result. The company sent us a MK50 unit to check out, play with, and review, so let’s dive in to see if it delivers.

When it comes to the box and what’s inside, UBTech’s offering is simple and elegant. The box looks great with a clean, matte-black look, clear branding, and a big window to let you see what you’re getting inside. Cracking open the box reveals only three pieces: the robot itself, an AR mat used for interfacing with augmented reality elements of the free iPhone/Android app, and a USB Micro charging cable. Even the paperwork consists of a single palm-sized sheet of glossy paper that acts as a quick-start guide, as well as the usual legal documentation that comes with any high-tech electronics meant to communicate over Bluetooth and use phone software. 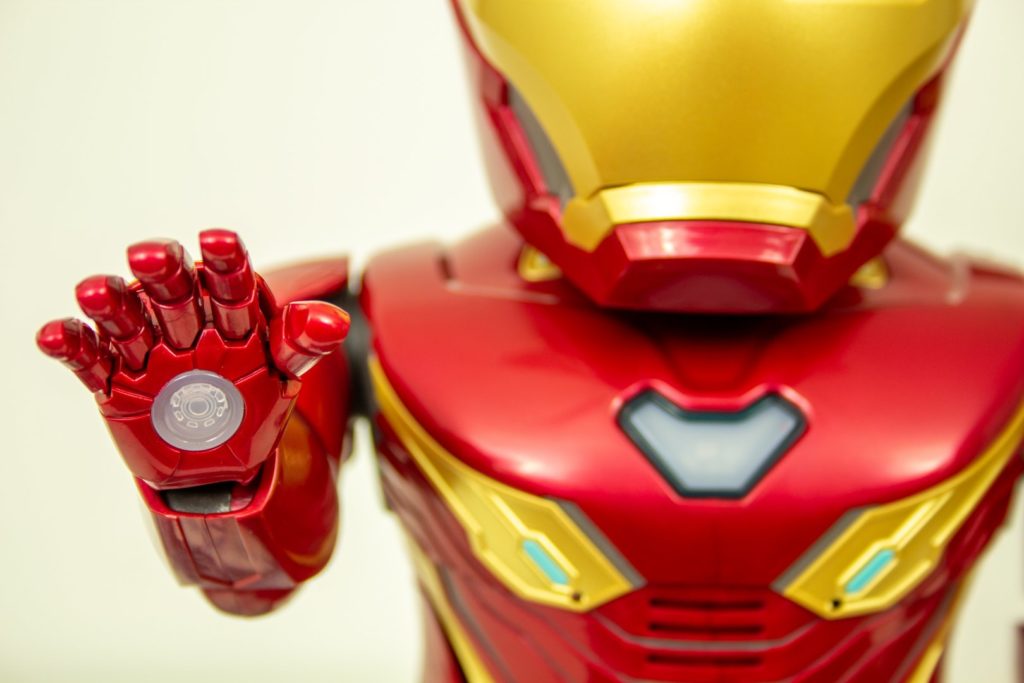 The only criticism I have of the packaging is that I wish the AR mat had come packaged flat against some cardboard rather than rolled up. Iron Man is supposed to look sleek, and rubberized fabric curling up around the edges looks anything but.

After untying him from the well-padded packaging, I set Iron Man on my desk and took a look at him. Like any other piece of electronics with a built-in battery, he needs to be charged before play. The port is cleverly hidden, but incredibly difficult to open. The quick-start card indicates clearly that Iron Man’s charging port is on his right shoulder under a panel, but doesn’t make it clear that the panel is going to be so tough to pry off. Rather than wrecking my fingernails or risking damaging it with some metal, I fished a vinyl pry pick out of my ifixit repair kit to get the panel open. A push-in-to-release mechanism here would’ve been really appreciated, especially since moment-to-moment play with the toy doesn’t involve touching it or physically interacting with it.

My next stumbling block came when trying to connect with it. After charging the robot, you have to download the Iron Man UBTech app and connect to the robot. There seems to be a specific order of operations to this, though. On my Android phone I first had to go into my Bluetooth menu and find the Iron Man device, then open the app and connect there. The first time connection can’t happen through the app. Connections after that are fast and simple and happen entirely through the application, but this was a definite stumbling block during setup. 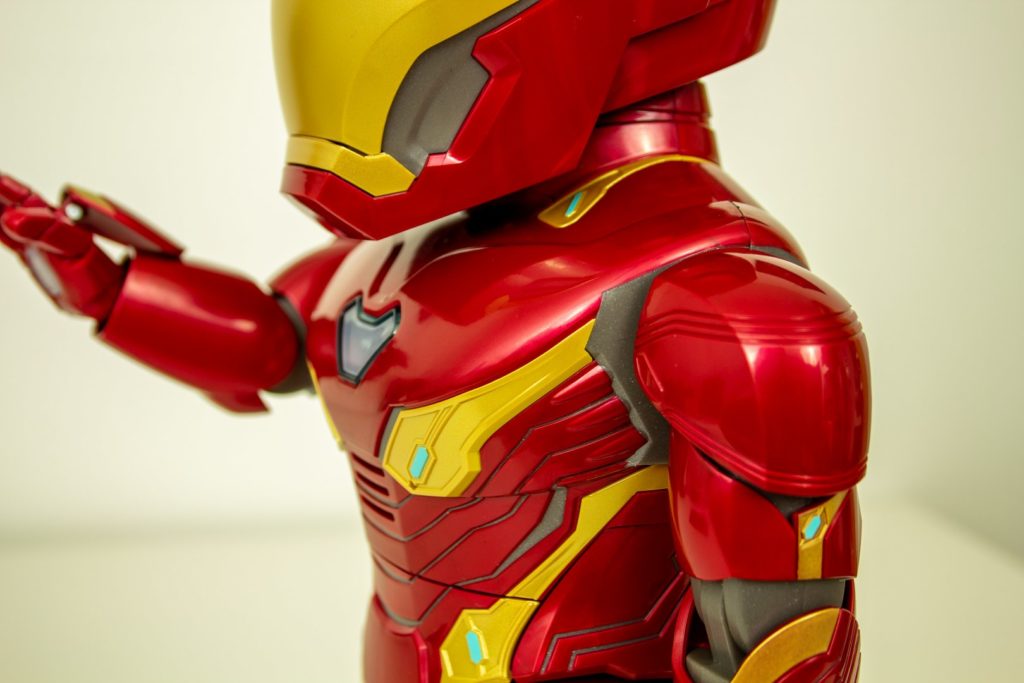 The look and feel of the toy itself is somewhat of a mixed bag. On the one hand, the lines and colors are perfect. It really feels like Marvel had a hand in approving the design of the toy and that UBTech cared about getting it right. He can move, turn his head, lift his arms, and even walk.

On the other hand, the nature of the toy is somewhat limiting. The reason we see those Boston Dynamics robot videos pop up online so often is that it’s really hard to get bipedal robots walking upright. The design that results from this limitation is what I would call “thicc Iron Man.” Everything is wider and thicker. It looks like an Iron Man suit on a toddler, so everything it does looks kind of funny as a result.

And while the suit does move, it’s limited in what it can do. For example, it can turn, but it does so by creeping one foot forward and then pulling it back. Think of a rowboat turning and you get the idea. It gets the job done, but not without looking silly. 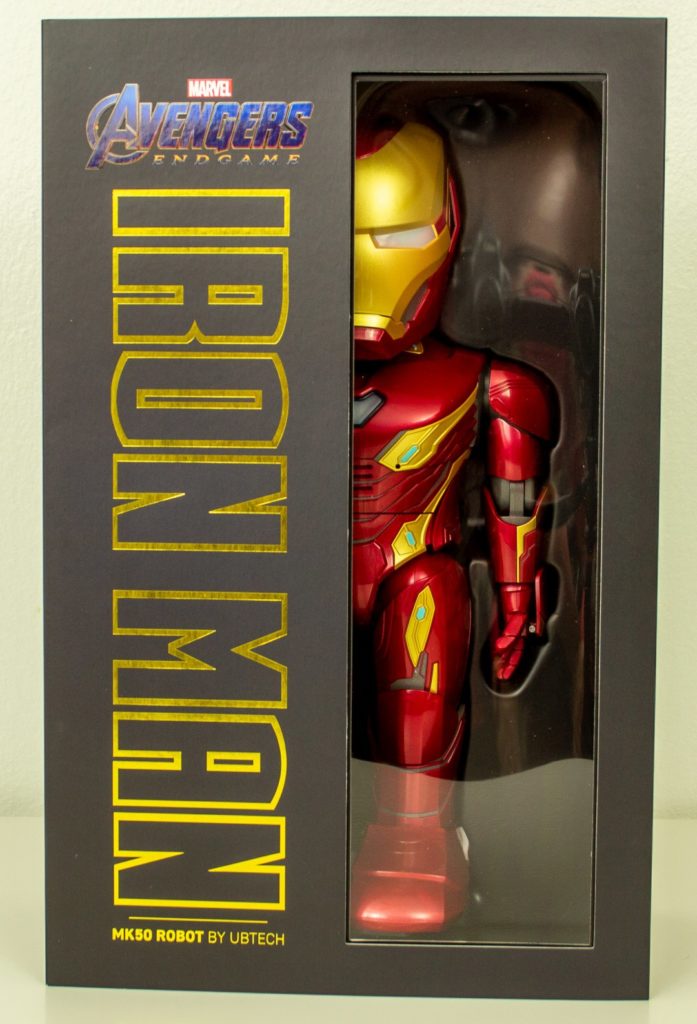 The voice and video aspects are a little silly as well. The set includes a bunch of pre-set lines and video clips of Tony’s face that can trigger during various times. A voice that sounds kind of Tony Stark-esque but not very interestingly so will ask for diagnostic checks and bark out warnings. The Iron Man mask can flip up to reveal a small video screen that, by default, can display short videos of Tony’s face, in the style of the close-ups from the Iron Man movies, but with a very flat-looking and generic-looking cartoon face. It’s a respectable job, but it’s hard to untie Iron Man from Robert Downey Jr., even if we can’t really blame UBTech for that. I think they could’ve gone with a more stylized look for the character for better effect.

Getting into the games is pretty easy. You put the Robot on the footprints on the included AR pad and the game scans in Iron Man and the surrounding room. You sit behind Iron Man with your phone or tablet and it draws out a setting like a city alleyway or courtyard on the screen. Then, enemies start attacking and you use different unlockable abilities to defeat them.

This part is pretty straight-forward. You’ll unlock things like shields, missiles, and other weapons to fight off drones in an AR environment. 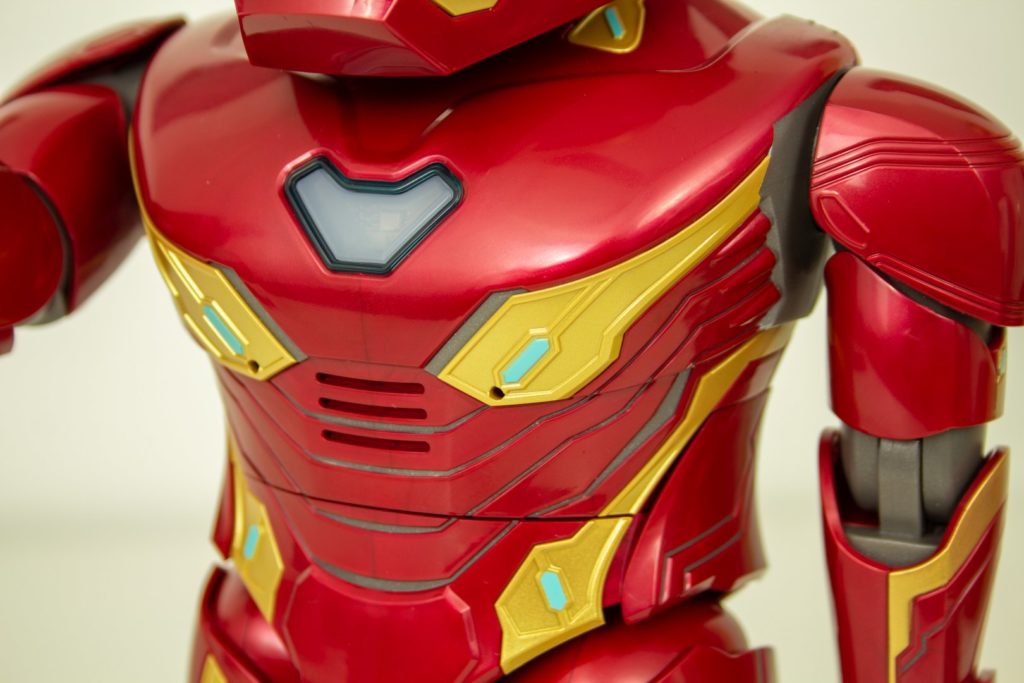 Mechanically, this all works pretty well. Iron Man scans in quickly once he’s in place on the mat, and tracking and firing on the drones works well.

UBTech clearly made an effort to tie the robot into the most recent Avengers films as you’ll fight drones based on enemies like Cull Obsidian from the movie. But they’re just static drones – they don’t animate, have voices, or anything like that, and that applies to all the enemies you’ll fight. This clearly was not the focus of the team’s budget or time.

The biggest problem is that while the Iron Man MK50 does twist at the torso and move its arms around during these sequences, the game requires that you stare at the screen, not the robot, so I never felt like I was interacting with anything physical during these.

It seems like the kind of thing that will warrant an hour or so of time from only the most devoted of players (or bored of kids). The thing is, if your phone can handle these AR games, it can probably handle Fortnite. Why play this when there are so many more compelling options?

But it’s not all fun and games with Iron Man MK50. Well, actually it is, but the AR game isn’t the only option in the app. There’s also the Iron Guard, Mobile Command, and Custom Protocol modes, which allow for more direct interaction with the toy.

Mobile Command is the most direct. Using on-screen buttons, I was able to make Iron Man move about, say Iron Man lines, and flash the six-or-so LEDs that decorate his body in various spots. He doesn’t move fast enough that this is going to be exciting, but I can definitely see a bored kid walking Iron Man right up to the edge of the countertop just to see what happens.

Iron Guard, meanwhile, puts the toy into monitor mode. The robot is equipped with a dual-array mic and set of IR sensors that allow you to set the robot up to react to movement and sound. You can even set it to require a verbal password, though only preset Iron Man-themed words are available, so you’re not going to be able to set up a situation where you get to say potty words to Iron Man and get an affirmative from him. 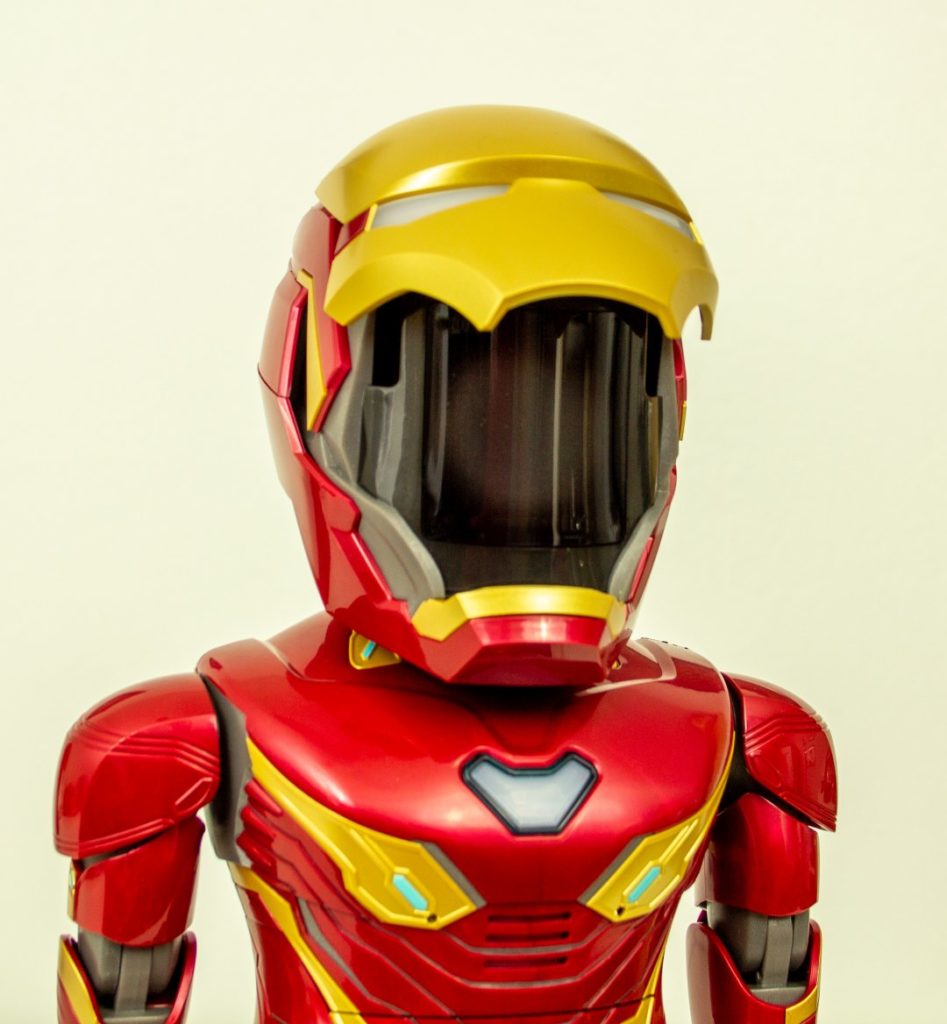 Custom Protocol mode gets a bit deeper. Here, you can operate the robot with a sort of basic visual programming language. You can set up a sequence like this: Walk [3 steps], Wait [2 seconds], Raise Left Arm [2 Seconds], Turn Head Left, Play Audio Clip – and then that audio clip can be Tony announcing that he’s Iron Man, or it could be a self-recorded clip of you saying “talk to the hand” in your own voice. Along with voice recordings, short video recordings can be uploaded, too, allowing you to do your own best RDJ imitation and have the robot play that back at you. Once you upload a protocol, you can disconnect your phone and say things like “Houseparty” to execute a pre-set or manually made protocol. Sadly, “Houseparty” does not suddenly generate 50 more $300 robot toys.

Setting all this up is time-consuming, but it’s straight-forward. You just drag and drop things in order. It’s easy to setup and pretty amusing to watch. For someone looking to get a younger kid into coding, this could be an interesting option to start with thanks to the friendly phone interface and the direct feedback of watching Iron Man toddle around. 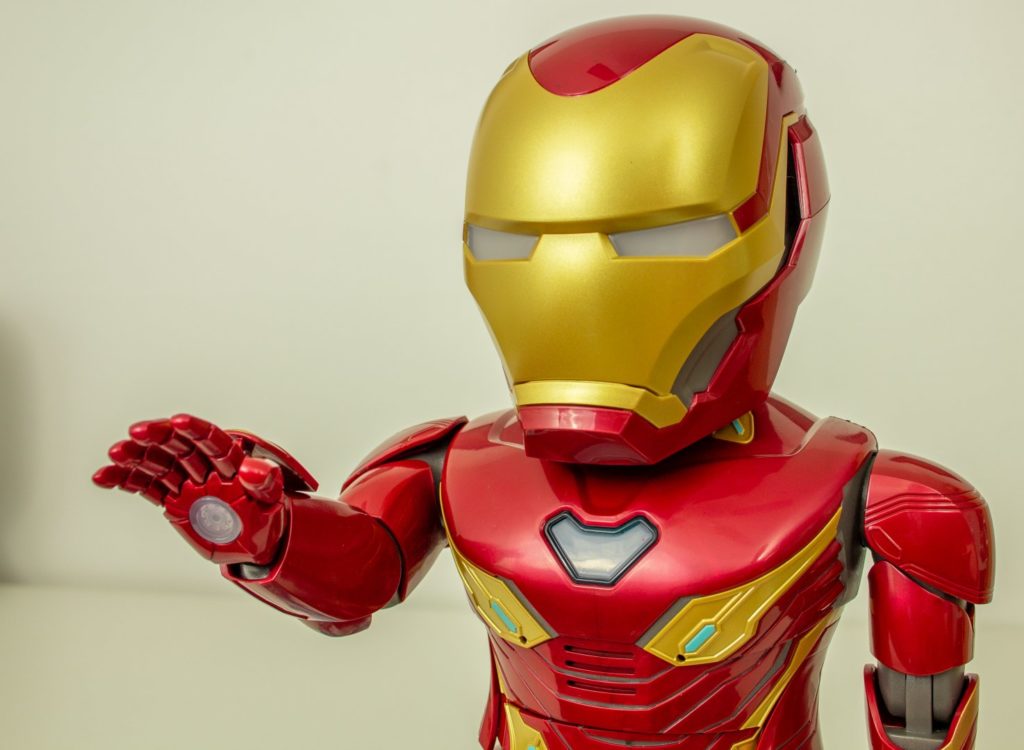 My biggest concern with this toy is that this kind of stuff feels like a couple of afternoons of play at the very best. A tablet, game console, or computer with endless options can be bought for the same price as this toy, and those offer countless options for learning to program, playing cheap shooter games, or doing Iron Man-themed activities.

Nearly $300 is a huge price to pay for something that feels so limited and so specific. That it’s operated by a phone app is cool, and it’s pretty friendly to older devices considering the iPhone 11+ and Android 7+ requirements, but eventually, those OSes won’t support the app or UBTech will stop updating it, and then the toy will be dead weight. Just a weirdly bulky Iron Man sitting on your shelf or in a box under the stairs.

Disclaimer: UBTech provided The Nerdy with a unit for the purposes of this review.