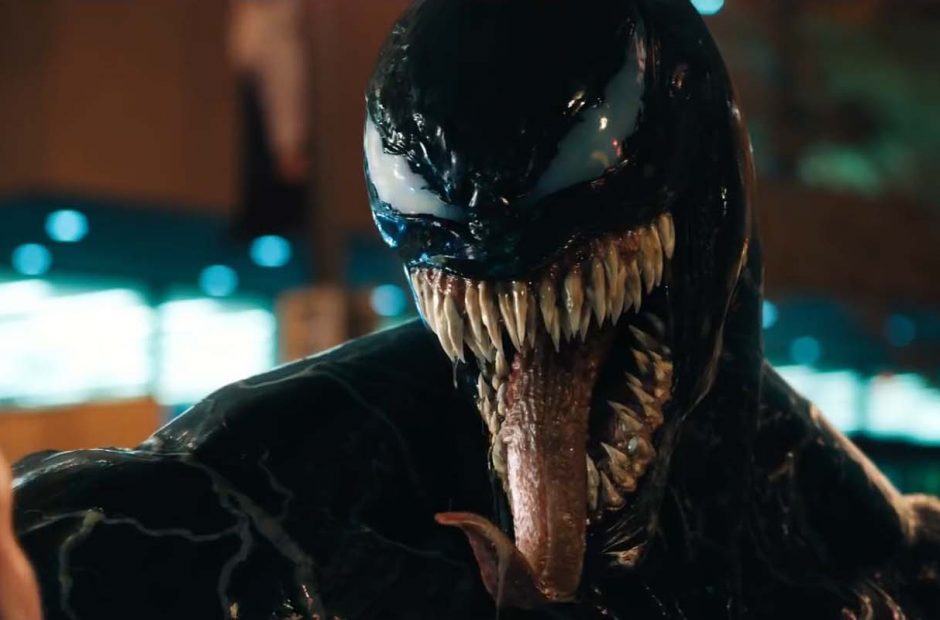 Venom is a weird, bad, silly, great movie. It’s a flashback to 90s comics and superhero flicks. It’s a buddy comedy. There isn’t a superhero movie quite like this, and that’s a good thing – both for Venom and for other superhero movies.

Trying to explain why I liked Venom feels a bit like having a symbiote whispering into my ear. On the surface, this is a bad movie.

I’m going to spoil the whole movie, but knowing every detail of the plot does not spoil it. I promise.

The first 45 minutes, maybe even the first 60, are a huge slog. We meet Eddie Brock as played by Tom Hardy. Eddie is supposed to be a Vice News-style investigative reporter, going to far-reaching parts of the world in terrible circumstances. He’s cool, which you can tell because he wears a leather jacket and rides a motorcycle, which are things that only Cool people do.

But this extremely cool reporter is the most awkward person to perhaps ever appear in a Marvel-branded movie. He doesn’t speak so much as mewl. He doesn’t make much eye contact with anyone. He does things that would get a reporter fired, and then gets fired for doing them.

Brock is researching the Life Foundation, led by Rid Ahmed doing his best Elon Musk impersonation – a wealthy, powerful, and driven innovator with extremely questionable ethics. The Foundation recently had one of its spacecraft crash to the earth, bringing a quartet of alien symbiotes with it, scraped off an asteroid covered in them – an invasion force, it would seem.

Through the first hour of the movie we watch Eddie be awkward, lose his job, and then break into the Life Foundation with the help of a scientist played by Jenny Slate. His first big screwup turned him into a pariah in the journalistic world of San Francisco, but apparently, he has enough money to afford a pretty spacious flat that would cost him at least $3,000 per month. At least.

It’s not until that break-in, which finally unites Brock with his new lifemate, that the movie takes off.

From here, we have a movie that isn’t sure if it wants to be funny at first, but that eventually embraces it, pulling along creative action sequences and hilarious interaction between Venom and Tom Hardy for the ride.

It’s not an exaggeration to say that Tom Hardy single-handedly carries Venom in both the literal and figurative senses, and it’s the two getting to know each other – Hardy himself and the character voiced by him – that ultimately fuels the movie.

Once the symbiote climbs inside Brock, his weird, twitchy demeanor makes sense. He’s a weird dude trying to come to grips with something literally no other human has experienced, and it feels weirdly organic.

The symbiotic relationship between the two is established pretty quickly once they meet, and we watch them working together and playing off each other. Venom knows he needs Brock to survive and Brock quickly learns that he needs Venom to do the same – and to expose the corruption of the Life Foundation.

Watching the two interact is worth the price of entry on its own. Hardy does some undeniably entertaining physical acting as he initially fights against the symbiote, twitching and reeling around his apartment, and then in the alleyway, and then in the hospital. That slips away as the two go back and forth, as Brock adjusts to Venom and Venom adjusts to planet Earth.

Through the course of the movie, we learn that Brock and Venom are birds of a feather, rejects among their own people, pariahs both. Venom wasn’t brutal enough to make it among his host-consuming kind, while Brock’s behavior isolated him from his loved ones further and further. They’re a perfect match.

I’m not sure if writing in the movie is bad, or if it’s perfect, though. Because after a while, it becomes clear that the movie is meant to be funny, and Venom’s silly quipping feels like it was lifted almost line-for-line out of his edgy 1990’s comics. That line from the trailers, about the armless, legless turd in the wind? It’s perfect. It’s so dumb. I love how dumb it is.

The movie wastes too much time on Eddie’s origin story, but it ultimately pays off: I want to see more of Tom Hardy as Venom.

Venom is a slimy character. There’s no way to get around it. Rendering that from the comparatively simple look on the comic page to a live action setting must’ve been a monumental challenge for the team behind this movie. And when you compare it directly to Thanos, Venom does not look good.

But I love what the movie does with him.

Later in the movie, Venom is fighting Riot, the only other of the four symbiotes to survive the crash and experiments that follow. It would be easy to just have them go at it in their burly, ultra-muscular-spider-man shapes, but the movie doesn’t stick to that. The two meld into each other, fighting for control of their amorphous shape. We see a cloud of tendrils and ropes of writhing life, with the two human hosts trapped in the middle, the symbiotes faces identifiable but out of place within. There’s never been a fight in a comic-book movie quite like this. It’s gross and weird and fun. It’s creative.

And that goes for a lot of the action in Venom.

Once Eddie and Venom get into a groove, the movie switches into a fast-paced action flick complete with a San Fran chase and a lobby shootout. Creative use of Venom’s powers make these a blast to watch. There’s the scene of that absurd motorcycle jump from the trailers, but other shots – like one of Venom using a street light to make a right-angle turn while protecting Eddie from the street below – feel fresh and fun.

What this all really boils down to is setting your expectations correctly. Venom isn’t a cool character. He’s a silly relic of the 1990s, when Todd McFarlane and Rob Liefeld reigned supreme, and grimdark, extreme characters ruled the pages of comics. It’s appropriate, then, that Venom feels like a relic of the past. Like a comic-book movie from 15 or even 20 years ago – and feels better for it. Venom feels true to the character and true to the tone of the storylines the movie used for fodder.

I actually want Tom Hardy to make another Venom movie, and I’m super curious to see what two British guys named Tom sporting pretend New York accents would do were Venom and Spider-Man to meet up on screen. With this version of Venom, we could skip the whole antagonistic part of their relationship and jump right to the interesting anti-hero meets hero part. I want to see a sequel where Venom meets Carnage, especially if it means more shots of Woody Harrelson in that silly, horrible wig.

Venom isn’t a great movie. It’s not even a good movie. It’s actually kind of a bad movie. But I had an absolute blast watching Tom Hardy, seeing the creative effects on display, and seeing something that felt true to the source material in every sense.