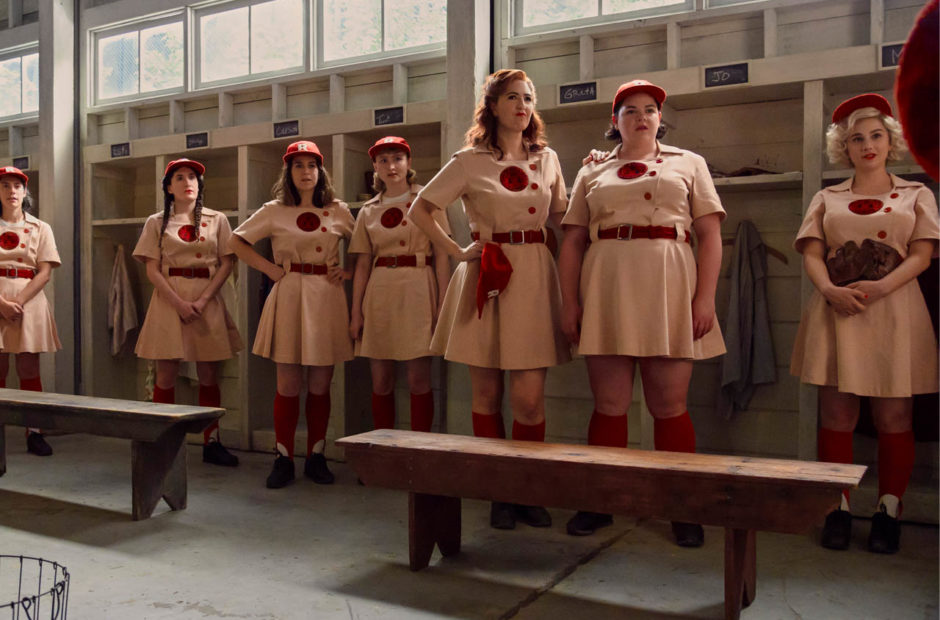 Is A League of Their Own season 1 worth your valuable TV-watching time? In the shortest possible answer: Yes.

Based on the film of the same name, A League of Their Own follows the story of the Rockford Peaches as the AAGPBL is forming amidst the ongoing events of World War II. Carson Shaw (Abbi Jacobson) has decided to go out for the team while her husband is off fighting in Europe. She makes it to the tryouts and immediately connects with Greta (D’Arcy Carden) as they both make it onto the team. The woman who doesn’t is Max (Chante Adams), a black woman who isn’t even allowed to try out due to racism, but she will be off on her own adventures soon enough.

And that, dear readers, is where the connections to the film pretty much come to an end. There is a half-hearted attempt to get “There’s no crying in baseball!” into the story, but it comes off as some form of forced requirement rather than being a highlight of the season.

The biggest sin of A League of Their Own is it just simply tries to do too much. Throughout the season, it attempts to tackle misogyny, feminism, homophobia, racial tensions, and so much more. But then it will take a peculiar turn and spend a large chunk of an episode focusing on Max and Clance (Gbemisola Ikumelo) trying to find crabs for a dinner. This odd sidequest touches on some of the threads of racism of the season, but also just feels like it goes on for far too long.

Clance also has a storyline about loving comic books and wanting to draw her own that feels like it could go somewhere if there’s a season 2. For now, it just feels like an odd quirk that sometimes distracts.

And that is another issue with the series is that there are simply too many characters. It is not well into the season until characters such as Lupe (Roberta Colindrez) and Jess (Kelly McCormack) feel like anything more than bodies that merely make a frame of film seem fuller.

There is no doubt that A League of Their Own has the best intentions, and I can’t help but think I would have been less harsh on it if it hadn’t used the title of the beloved film. All of the exact same stories could have been told by simply having all of the women come together working in a wartime factory – which Max and Clance actually do. Instead, the story saddles itself with expectations by using the name and premise of a beloved film, and then completely ignoring what made that work.

The series is well made, and it has its moments, but at the same time, it still feels like it should have been something else and simply put on a League of Their Own costume to pull in the customers.

Disclaimer: Amazon provided The Nerdy with all eight episodes of A League of Their Own season 1 for this review. We watched them to completion before beginning this review.

# A League of Their Own Amazon TV Reviews Review