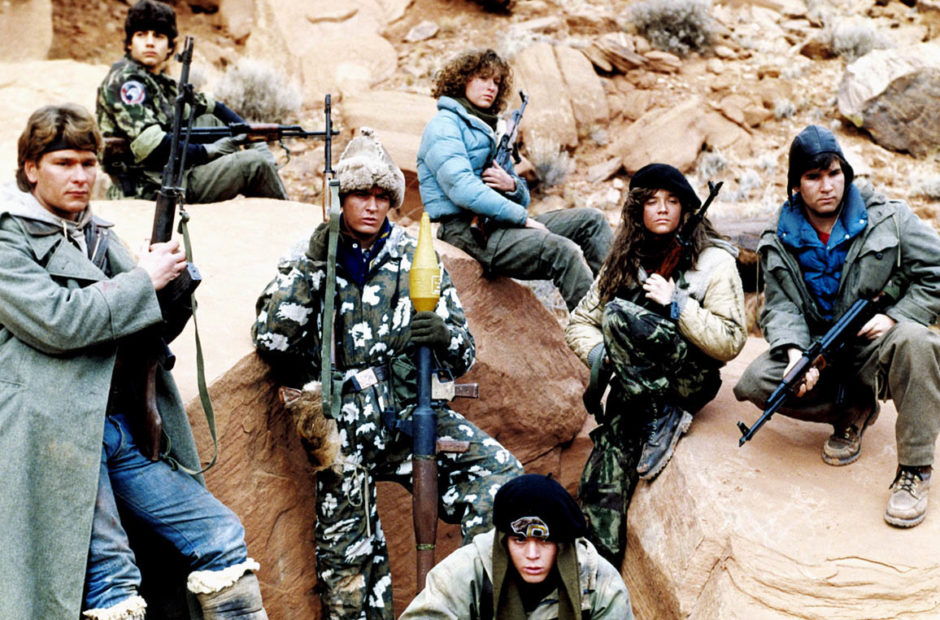 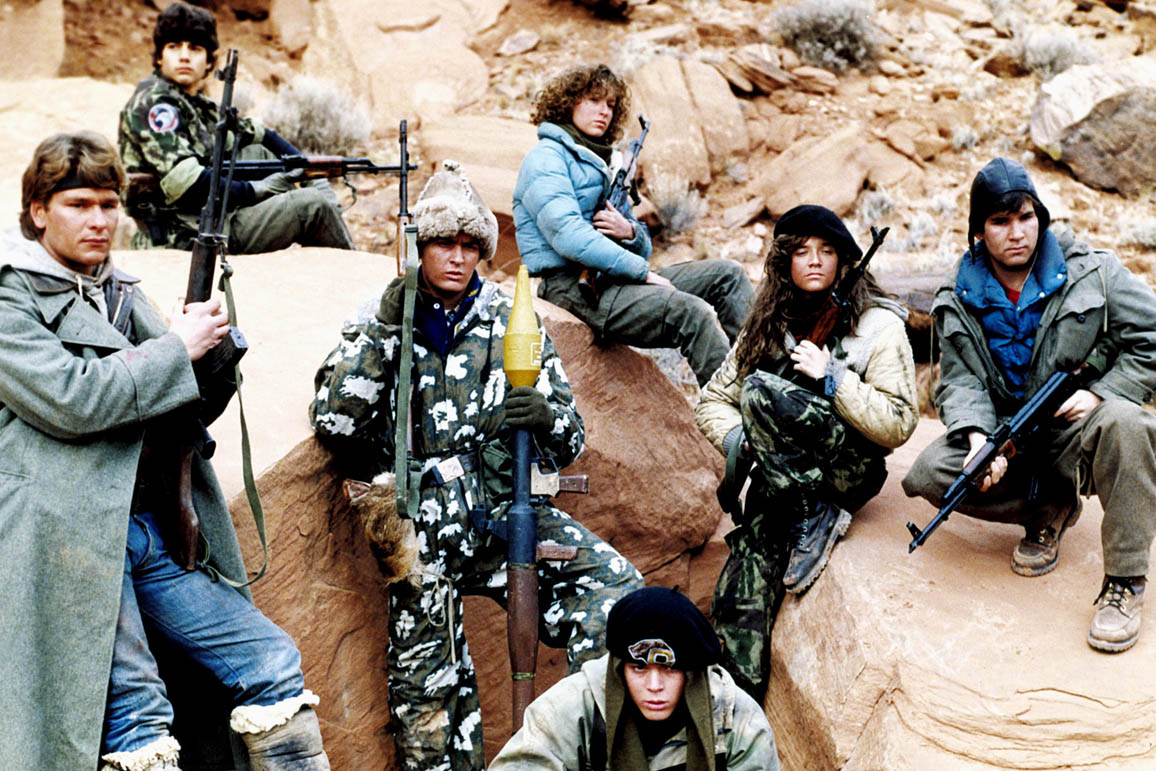 Lets get this out of the way: Red Dawn is not a good movie. It has some huge logic holes in it and next to no character development.

I still enjoy it for some odd reason.

The film, of course, is the story of a small town in Colorado being invaded by the combined forces of Russia, Cuba, and Nicourga. There is some text at the beginning about how the world has fallen apart and NATO has collapsed allowing this to happen. A group of teenagers take on the name of their high school football team – the Wolverines – and fight back.

There are so many logic issues within the structure of the film that it is mindboggling. For instance, Daryl (Darren Dalton) turns out to be a traitor to the group of teenage guerillas as he had gone to town, been tortured, and swallowed a tracking device. Okay, fine… no one noticed he was gone and wondered where he went? It has already been established that getting town wasn’t just a hop, skip, and a jump.

Towards the end of the movie, Danny (Brad Savage) and Erica (Lea Thompson) are going to try to make it the U.S. controlled area. Jed (Patrick Swayze) and Matt (Charlie Sheen) volunteer to stay behind and distract the occupying forces so they don’t pursue them. But… the forces didn’t know where they were to begin with, how would they even know they left? There was no reason for Jed and Matt to stay behind. All four of them could have simply said they were done and walked out without anyone knowing.

And don’t get me started on the bizarre “Erica has a crush on the older man” storyline that seems just randomly thrown in. Lt. Tanner (Powers Booth) ejects from his plane, is found by Erica, and suddenly she’s all swoony for him. It’s odd and so very random.

… don’t care. I’d still watch this movie again. Put it in the guilty pleasure column if you must. 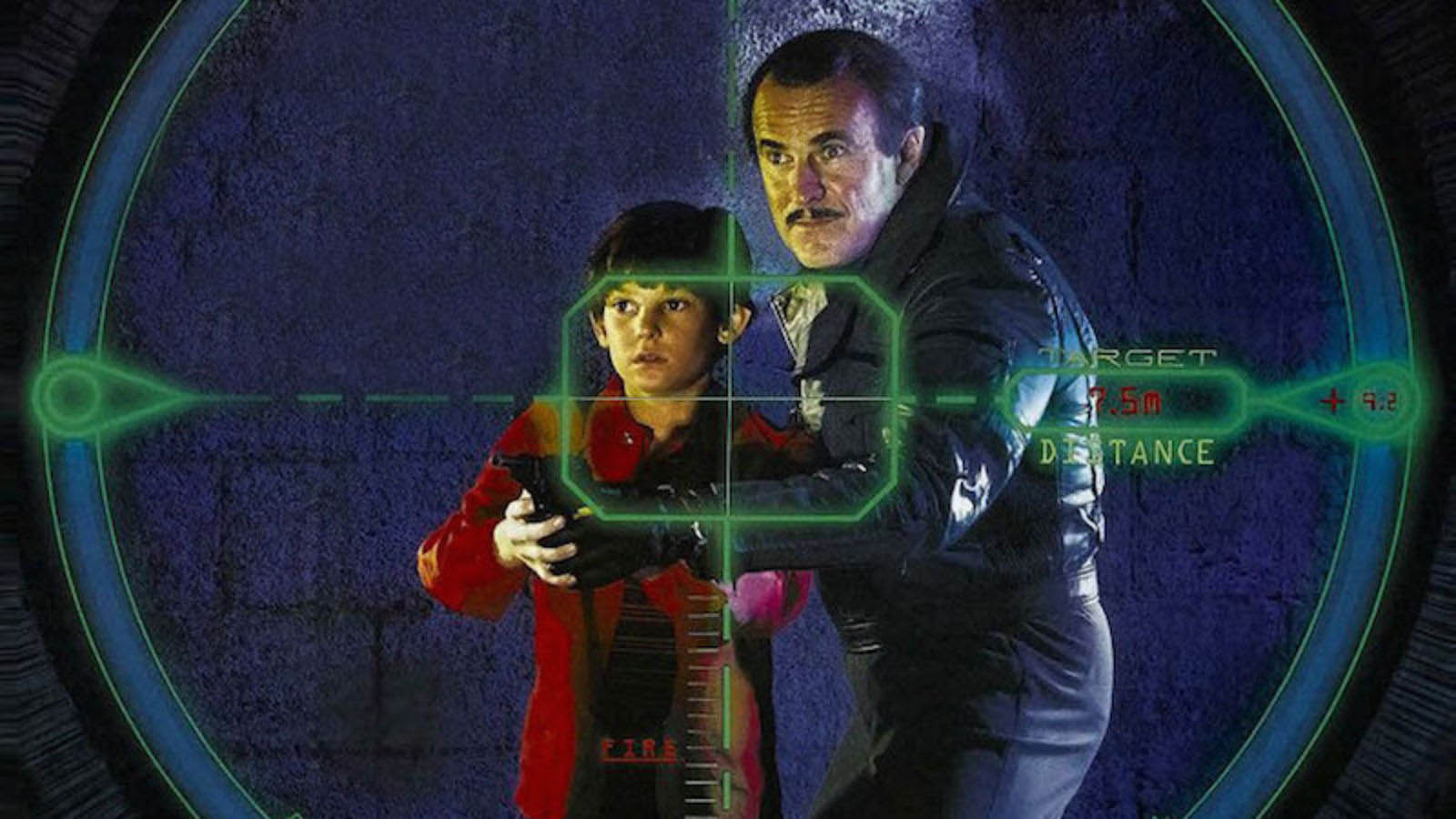 I had never seen Cloak & Dagger before this project, and… I could have gladly gone the rest of my life without seeing Cloak & Dagger.

Remember, this movie came out mere weeks after beloved children’s movie The Neverending Story. While I never cared for that film, it looks like a masterpiece compared to this paint-by-numbers spy thriller with an imaginary friend.

Davey (Henry Thomas) witnesses something he shouldn’t and is handed top-secret plans concealed in a “game tape,” and becomes the target of hitmen and spies. And, of course, no adults will believe him because he has a vivid imagination.

First off, lets just address how many times in this movie the game cartridge is referred to as a “game tape.” Did no one on set no this was wrong? They do actually call it a cartridge fairly late in the film, so even they switched things up at some point.

This movie is just not good. It’s only 101 minutes, but feels closer to eternity. It is shot on some cheap film stock that looks like it was left over from a 1970s B-film, and… just no.

And what gets me is that this is a kid’s movie ostensibly, and yet there are some fairly grizzly scenes. A body in a trunk. A woman missing two fingers. Davey shoots and kills a guy immediately following tricking one hit man until killing another.

It’s just an odd film and not one I’d be showing to a kid any time soon, personally. And as an adult… no. Just… no.

1984 Movie Reviews will return on August 15 with The Adventures of Buckaroo Banzai Across the 8th Dimension!